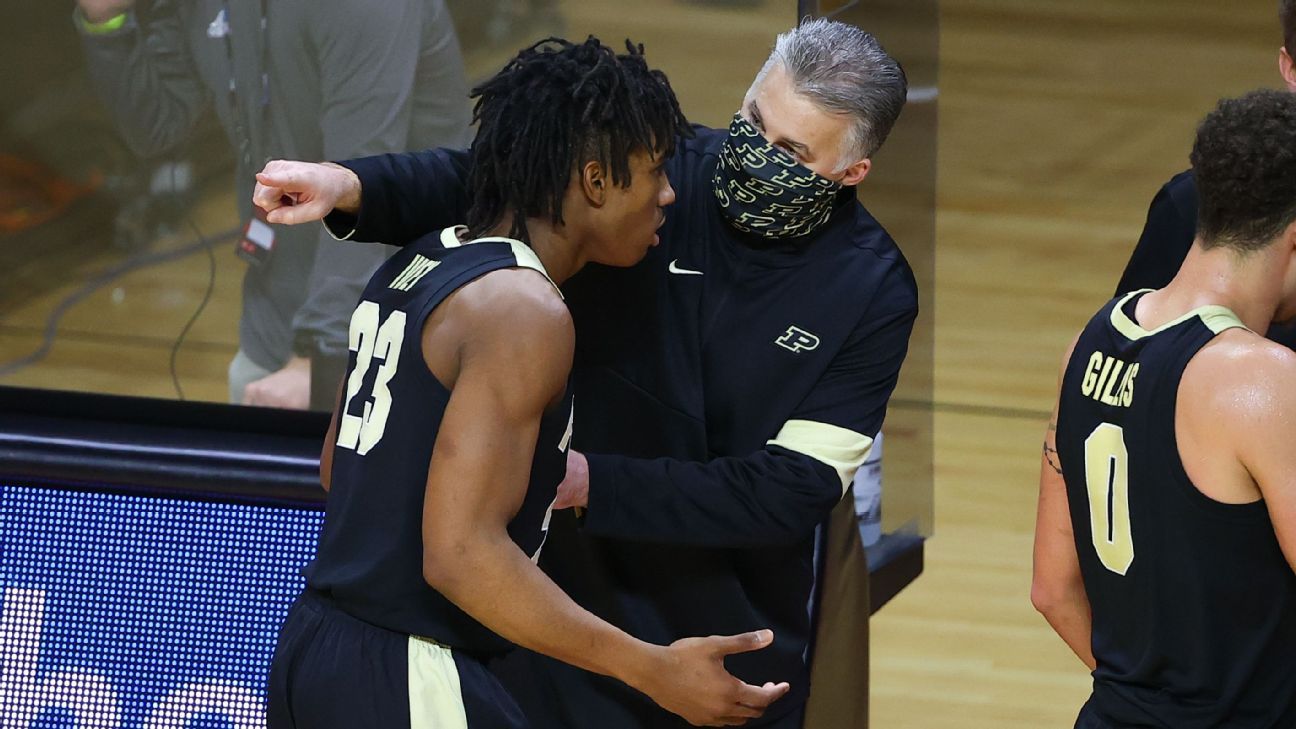 Thanks so much to everyone for the overwhelming amount of prayers, support and well-wishes I’ve received since announcing my melanoma diagnosis. Your love means the world to me as a I prepare for this fight! In the meantime, I am so excited for the 2021-22 college basketball season to get underway. Has it really been that long since Baylor cut down the nets, beating an unbeaten Gonzaga squad that was favored?

The transfer portal has changed everything, and a number of teams have relied heavily on it. Several stars have changed teams and their moves will influence my rankings.

It is fun to sit down and put together my preseason top 40. College hoops has so many competitive matchups and exciting tournaments scheduled for November. The bottom line, and the goal, is simple: to cut down the nets in April.

Time to go out on a limb, baby! Keep track to see how well I did!

Is this the year Mark Few cuts down the nets as a national champion? He was so close last season. The Zags lost a lot of talent, including Jalen Suggs, Corey Kispert and Joel Ayayi. Few welcomes back Drew Timme, arguably the top player in America. He adds Chet Holmgren, considered by many the top recruit in the sport. That’s a nice dynamic duo up front. Andrew Nembhard, the former Florida transfer, figures to have added responsibility. Iowa State transfer Rasir Bolton averaged over 15 points per game last season and will fit in nicely.

Mick Cronin’s team was a No. 11 seed in the Big Dance, and the biggest surprise in the Final Four before Suggs hit a three-pointer to end the Bruins’ incredible run. Cronin has the majority of his stars back. Johnny Juzang had an outstanding tournament and should shine again. Jaime Jaquez Jr. continues to impress. Tyger Campbell is a leader and distributor in the backcourt. The addition of Rutgers transfer Myles Johnson will add toughness up front. The Bruins last won the national title under Jim Harrick in 1995. This UCLA squad can return to glory.

Chris Beard should enjoy his first season with the Longhorns. He landed the best group of transfers, led by Marcus Carr from Minnesota. This Texas squad is one of the deepest in America; the second team could be ranked as its own unit. Andrew Jones is the top returning starter and he may be coming off the bench. Dylan Disu is coming off a knee injury; if he is healthy, he has double-double potential. Tre Mitchell can flat-out play. There is excitement galore for Texas, which will battle with Kansas for the Big 12 title.

The Wolverines will be the team to beat in a loaded Big Ten. Juwan Howard has a solid blend of veterans and newcomers. Hunter Dickinson was among the best big men in America last season. Caleb Houstan is one of the highest-regarded diaper dandies, and can do it all at 6-8. Eli Brooks is back as a grad student to provide experience and leadership. Michigan will be a Final Four contender and battle-tested in a competitive league.

Rock, Chalk, Jayhawk is thrilled to add Arizona State transfer Remy Martin. He is one of the nation’s premier transfers, a potential 20 point-per-game scorer. Add veterans Ochai Agbaji and David McCormack, and you have three players picked on the Big 12 preseason first-team. Bill Self has led the Jayhawks to 18 straight 20+ win seasons, for a program that has 32 straight overall. Chalk up another one, baby!

Penny Hardaway has two of the best diaper dandies in Jalen Duren and Emoni Bates. How will they adjust to the college game? Odds are they will do just fine. There will be pressure of expectation, but they should be ready to succeed. Landers Nolley II should continue to post impressive numbers; the former Virginia Tech transfer will score to take pressure off the freshmen. This team will battle Houston for the AAC title.

Jay Wright feels he can contend for his third national title. The return of Collin Gillespie from a torn MCL gives the Cats a veteran leader and outside scoring threat. Veterans Jermaine Samuels and Caleb Daniels are reliable double-figure scorers. Samuels will have added responsibility with Jermaine Robinson-Earl gone. The Cats are expected to add to their Big East trophy case.

Matt Painter has a very talented group returning. Trevion Williams is the big man on campus, and dominates inside. I really love Jaden Ivey to have a big season for the Boilermakers. Another big man, Zach Edey, will have a larger role and Sasha Stefanovic is a vital three-point shooter. Purdue will make noise in the deep Big Ten.

The Bears lost a lot talent from the national championship team, but don’t worry, Waco — Scott Drew will reload. Matthew Mayer is expected to do big things. Adam Flagler returns and will be a bigger factor as a scorer. The addition of James Akinjo from Arizona continues the succession of transfers contributing to the Bears’ success. Texas and Kansas are the Big 12 favorites, but Baylor will be in the hunt.

Nate Oats produced a special season in 2020-21, as the Tide won the SEC regular season title for the first time since 2002, and the conference tournament for the first time since 1991. Depth and three-point shooting were keys to the success. Oats lost some talent but Jahvon Quinerly and Jaden Shackelford return. Diaper dandy JD Davison will have an immediate impact. Transfer Noah Gurley from Furman should contribute. The Tide suffered a loss when Texas Tech transfer Nimari Burnett was lost to knee surgery.

Clearly the headline is the final season for Coach Mike Krzyzewski. Duke fell short of the NCAA tournament, but that won’t happen again. Coach K brings in one of the best diaper dandies in Paolo Banchero, who will put up big numbers. Wendell Moore Jr. needs to step up and producer more. Mark Williams came on last season and should be a vital factor. Diaper dandy A.J. Griffin suffered a knee injury in the preseason and may not help early.

Big Blue Nation had a shocking, disappointing campaign a year ago. This will be a different year as outside shooting has improved and John Calipari added several experienced transfers. CJ Fredrick comes in from Iowa, though he is coming off an injury. Kellan Grady is an experienced scorer in from Davidson. West Virginia transfer Oscar Tshiebwe will provide a physical presence up front. Diaper dandy Ty Ty Washington will be important handling the ball. Veterans Davion Mintz, Keion Brooks Jr., and Dontaie Allen also return.

Roy Williams retired and the Hubert Davis era begins. Chapel Hill will rock and transfers will be a factor. Dawson Garcia from Marquette and Brady Manek from Oklahoma will improve the frontcourt. Then add Armando Bacot and you have a solid group. Leaky Black and Caleb Love both return and should be better with a season of experience under their belts.

Eric Musselman has built something already at Arkansas and transfers have helped. If Chris Lykes from Miami can stay healthy, he will be a leader. Adding guard Stanley Umude from South Dakota provides a proven scorer. Au’Diese Toney comes in from Pittsburgh and he should also contribute. JD Notae, Davonte Davis and Connor Vanover return.

Brad Underwood is thrilled that Kofi Cockburn passed on the NBA draft and returned to Champaign. He should be an All-American. Andre Curbelo had a good freshman season and will be called upon to do more. Veteran Trent Frazier returns and remains a reliable performer. Guard Alfonso Plummer transferred in from Utah and provides a long distance shooting threat. Omar Payne transferred from Florida and could contribute up front.

The Cougars made the Final Four last season. Quentin Grimes is gone, so Marcus Sasser figures to be the shining star for the Cougars. Kyler Edwards transferred in from Texas Tech and he figures to contribute. Kelvin Sampson has 111 wins over the last four seasons and should go well over 20 more victories this season.

The Terps benefited early from the transfer portal. Mark Turgeon’s team improved with the addition of guard Fatts Russell from Rhode Island and big man Qudus Wahab from Georgetown. Guard Eric Ayala returns and could improve on his 15 PPG average of last season. Donta Scott and Hakim Hart are other veterans who need to produce more.

The Ducks are picked second in the Pac-12 behind UCLA. Will Richardson missed the start of last season and Dana Altman will be happy to have the 6-5 star for the whole season. He’s an All-Pac 12 performer. Transfers have been a factor in the past and Syracuse transfer Quincy Guerrier will fit in nicely after averaging 13.7 PPG and 8.4 RPG. They also add transfers De’Vion Harmon from Oklahoma and Jacob Young from Rutgers.

Will Wade welcomes back underrated forward Darius Days. The addition of transfers Xavier Pinson from Missouri and Adam Miller from Illinois will be positive. They will have to shine since Cam Thomas, Javonte Smart and Trendon Watford — three players who averaged 16+ PPG — are gone.

E.J. Liddell is one of the best returning players in the Big Ten. The Buckeyes have experience, with Justice Sueing, Kyle Young, Justin Ahrens and former Harvard transfer Seth Towns all back. Chris Holtmann has done a great job in the past, with four straight 20-win seasons despite competing in the rugged Big Ten.

Bruce Pearl lost Sharife Cooper, Jamal Johnson and JT Thor, but there is reason for optimism based on what he brought in. Walker Kessler, the 7-1 sophomore, should be much improved after transferring from North Carolina. Jabari Smith is one of the most versatile diaper dandies coming in and expectations are high for him. Wendell Green Jr. and K.D. Johnson are other transfers who will have meaningful roles. The Tigers suffered a blow when Allen Flanigan suffered a serious Achilles’ injury.

The SEC is loaded again and Rick Barnes feels his team can contend. Josiah Jordan-James should put up greater numbers. John Fulkerson opted to return after an injury-plagued season. Kennedy Chandler was a highly regarded recruit who participated on the USA under-19 team this offseason.

I believe Mike Brey’s Irish will surprise a lot of people. It starts with transfer Paul Atkinson, a transfer from Yale. He was the best player in the Ivy League and should be special in South Bend. Nate Laszewski, a 6-10 veteran, can score inside and rebound, forming a great inside 1-2 duo with Atkinson. Prentiss Hubb and Cormac Ryan provide experience and scoring ability.

Leonard Hamilton is 40-13 in the ACC over the past three years. Look for more success as a veteran nucleus including Rayquan Evans, Wyatt Wilkes, Malik Osborne, and Anthony Polite, all return. Transfers Caleb Mills from Houston and Cam’Ron Fletcher from Kentucky figure to contribute.

Tom Izzo will get a boost with the addition of transfer Tyson Walker, a guard from Northeastern. Walker was the CAA Defensive Player of the Year. Joey Hauser has to improve after a disappointing season a year ago.

The 17th annual Dick Vitale Gala, benefiting the V Foundation, will be held May 6, 2022, at the Ritz-Carlton in Sarasota, Florida. For more information visit dickvitaleonline.com.