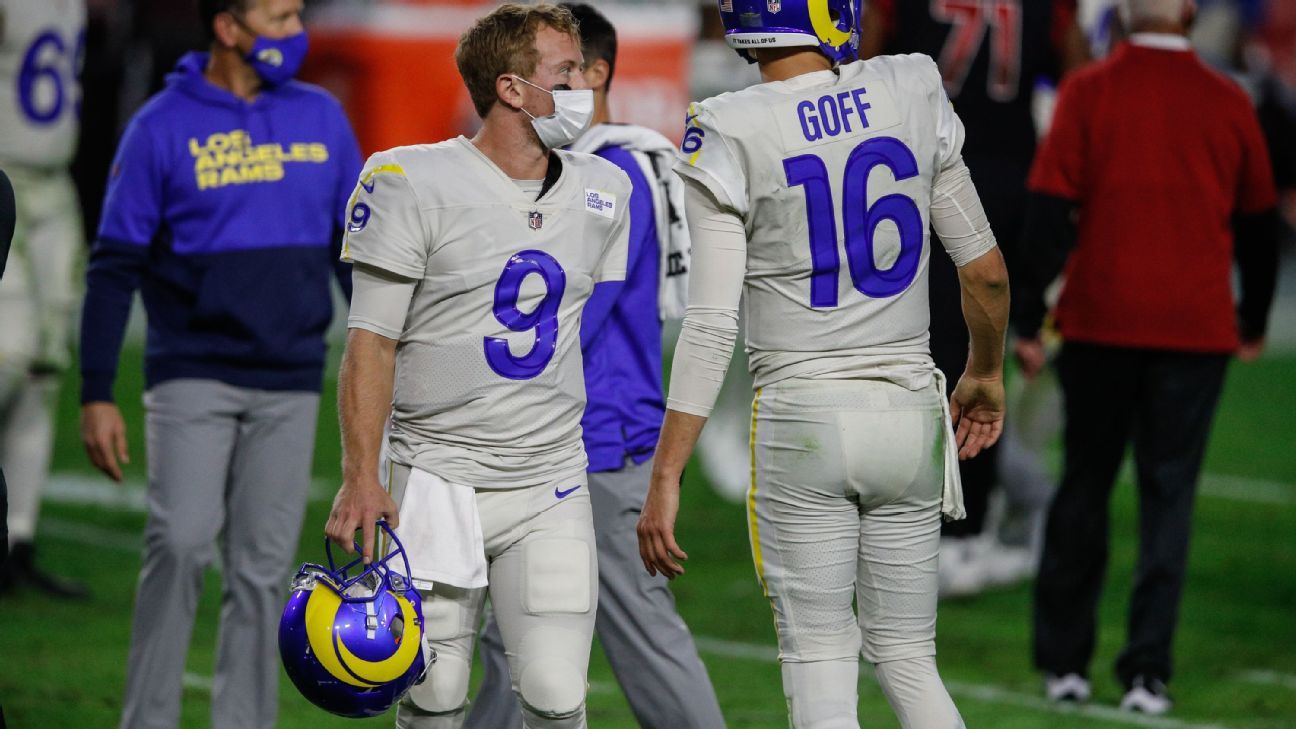 THOUSAND OAKS, Calif. — If all goes as planned against the Arizona Cardinals, backup quarterback John Wolford will lead the Los Angeles Rams to a playoff berth.

As an added bonus, Wolford likely won’t have to listen to head coach Sean McVay and teammates mispronounce his name any longer, and he’ll be able to delete the LinkedIn account that has chronicled his previous career in finance.

“I know I can spin it, I know I can make the throws, and then mentally, it’s about making the right decisions to give us the best chance to win,” Wolford said Wednesday. “I’m confident going into this week.”

Wolford will make his NFL debut in the absence of quarterback Jared Goff, who underwent surgery on his throwing-hand thumb Monday and will be sidelined for at least a week.

To clinch a playoff spot, the Rams (9-6) must win at SoFi Stadium against the Cardinals (8-7), or the Chicago Bears (8-7) must lose at home to the Green Bay Packers (12-3), who are playing for the NFC’s top overall seed.

“It’s something you kind of dreamed about your entire life,” Wolford said about making his first NFL start with a playoff spot at stake. “But I’m not going to get too caught up in the moment.”

Throughout a 15½-minute videoconference with reporters Wednesday, Wolford appeared calm and answered questions with candor. He admitted he slept less than normal the night he found out he would be starting, but says he’s since settled back into routine.

He cleared up some confusion about how to pronounce his last name — it’s “Wole-ford,” though he says he isn’t bothered when it’s pronounced wrong, something McVay has done throughout his two-year stint with the team. As for a LinkedIn account he created as a freshman at Wake Forest when an NFL career seemed improbable and planned to enter finance, his occupation was updated this week to read, “Quarterback for the Los Angeles Rams.”

McVay, receiver Robert Woods and defensive coordinator Brandon Staley — whose unit faces Wolford when he runs the scout team, expressed confidence that the inexperienced QB will be able to lead them to a win Sunday.

“John Wolford has the full respect of our entire team, coaches and players, because of how he performs on the practice field, in the meetings and in the weight room,” Staley said. “I think that’s a rare thing when you can have the respect of your teammates without actually having performed in an NFL game.”

When asked what skillsets he possessed that might be different from Goff’s, Wolford – who is listed at 6-foot-1 and 200 pounds — pointed to his athleticism.

“I don’t want to knock Jared’s athleticism, he’s a great athlete, he’s an NFL quarterback,” Wolford said, “but I think I’m a little bit faster than him and can make a few more plays with my legs.”

“I do think John’s got a skill set that will be fun to watch him execute our offense and how things come to life differently,” McVay said. “Each guy has a creativity to his game, but I think he’ll do a nice job kind of distributing and making good decisions.”

The Rams did not practice Wednesday, but instead held a walk through.

“Great communication, great command of what we’re trying to get done,” McVay said about Wolford’s presence in the workout. “Great understanding and ownership of the initial parts of the game plan.”

Practices are scheduled to resume Thursday and Friday as the Rams prepare to go into Sunday’s game without both leading rusher Darrell Henderson who was placed on injured reserve and receiver Cooper Kupp, who was moved to the reserve/COVID-19 list this week.

Woods said Wolford, who turned 25 last October, does not lack for confidence and that he’s known to be among the last players to leave the practice field daily after he fulfills requests from receivers who want a few extra balls thrown their way. But even Woods isn’t so sure what to expect from in a game from Wolford, who went undrafted in 2018 and signed with the Rams practice squad last season after he threw a league-high 14 touchdowns in the since-folded Alliance of American Football league.

“I haven’t seen him on a NFL, or a live game, I’ve seen him a couple preseasons, watched his highlight tape on YouTube,” Woods said. “Checked him out to see what he could do, but really just coming out here and expecting John to make plays.”