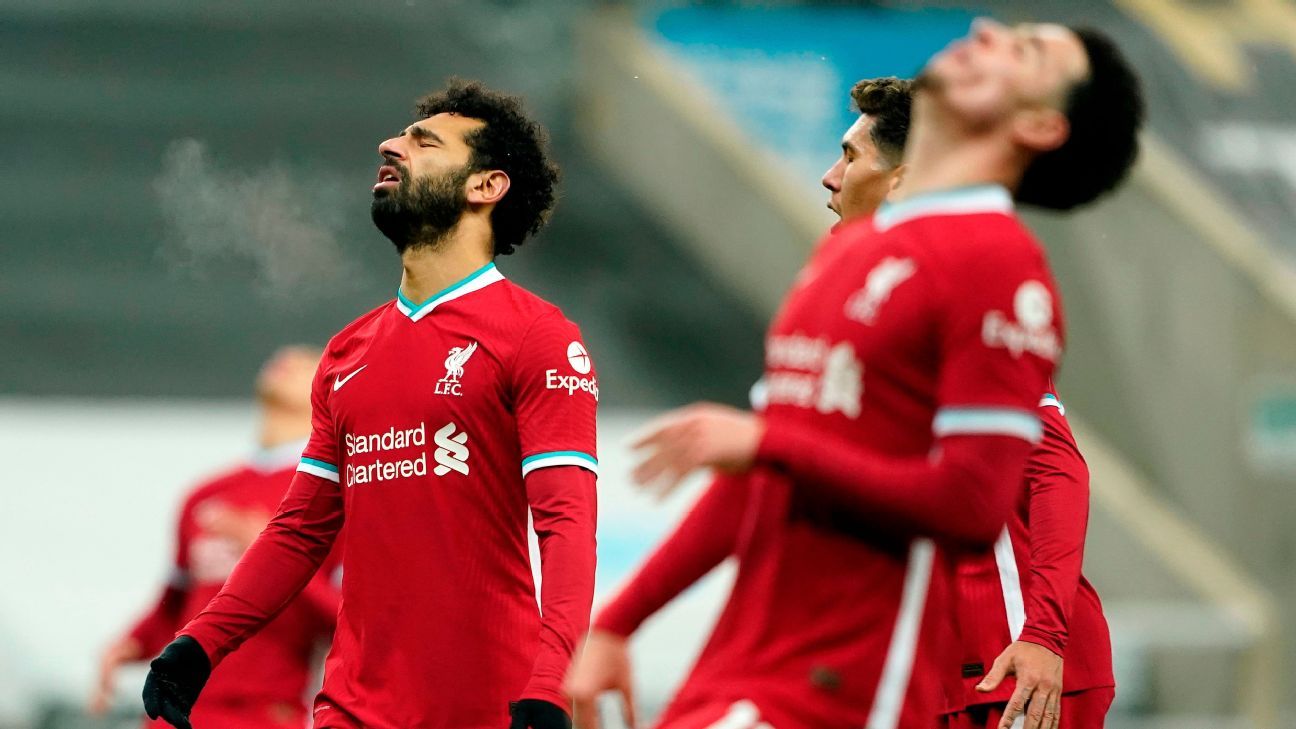 NEWCASTLE, England — Liverpool ended 2020 just as they started it, at the top of the Premier League and in pole position to end the season as champions, but Wednesday’s 0-0 draw against Newcastle United at St James’ Park proved that not everything is the same as it was 12 months ago.

The first goalless stalemate between these two clubs since 1974 highlighted the key difference between the Liverpool of today and the one which sprinted clear of the chasing pack in the first half last season. A year ago, Liverpool racked up the points by finding the killer touch in tight games and winning when the margins were narrow. But at St James’s, despite seeing the likes of Mohamed Salah, Sadio Mane and Roberto Firmino have clear chances to score, this Liverpool was unable to unlock the door and turn one point into three.

That is becoming a recurring problem and explains why Liverpool go into 2021 locked in a title race rather coasting at the top, as they were a year ago.

“We drew tonight and we are still top of the table, so that just shows how difficult the season is for everybody,” Liverpool manager Jurgen Klopp said. “When life gives you lemons, make lemonade.”

Klopp and Liverpool might be making lemonade with their lemons, but it is lacking a certain sweetness right now. A central factor in Liverpool’s title success last season was their ability to find a crucial winner in tight games like this one. They won 14 league games by a one-goal margin on the way to the title, but this time around, they have done so just four times.

When Firmino headed in his 90th minute winner in the 2-1 Anfield victory against Tottenham two weeks ago, it seemed as though normal service had been resumed. The subsequent 7-0 win at Crystal Palace three days later then appeared to be an emphatic warning to the rest that Liverpool had found their scoring boots and would inevitably pull clear at the top, leaving the rest trailing in their wake.

But Sunday’s 1-1 draw at home to relegation-threatened West Brom was the kind of result that Liverpool would always manage to turn into a victory last season. And the same could said of this game at Newcastle. Worryingly for Klopp, Liverpool managed just one shot on target in the second-half against West Bromwich Albion and his team repeated that statistic at St James’s.

The lack of creativity in midfield is one factor. Collectively, Liverpool’s array of midfielders have amassed just three goalscoring assists all season. The goals are still being made by the full-backs, with seven coming from deliveries by Trent Alexander-Arnold and Andrew Robertson, but opponents have learned how to smother Liverpool in the centre of the pitch. The return to action of Thiago Alcantara as a second-half substitute at Newcastle, more than two months after his last appearance against Everton, is a positive for Klopp and the Spaniard will make a difference, but Liverpool do not have the luxury of a huge lead at the top that they had this time a year ago and they are facing a genuine battle to hold onto their crown.

Although they ended 2019 with a 13-point lead over second-place Leicester City — having played one game fewer than the Foxes — the delayed start to this season as a result of the coronavirus pandemic means that the year-on-year comparison is not a fair representation of Liverpool’s diminished returns. But after 16 games last season, Liverpool were eight points clear having won 15 and drawn one of those fixtures. Now, they are three points clear of second-place Manchester United, who can move level with Liverpool if they win their game in hand against Aston Villa on Friday.

In terms of goals, Klopp’s team are only three behind last season’s tally of 40 after 16 games, but the seven scored at Palace distort the picture somewhat. Having dropped points with draws against struggling West Brom, Fulham and Brighton & Hove Albion, their inability to score when it matters is an issue that Klopp accepts is become a problem.

“We didn’t score enough in the other games,” he said sharply, when asked to explain the failure to turn draws into victories. “Not scoring is only a concern if you don’t create. If you create, it’s just momentum. If you keep creating, you will score. I know we will score again, that’s how it is. It’s not a problem in the moment.”

Liverpool should have scored more than once at St James’s. Salah sent two close range efforts wide, Firmino had a header well-saved by Newcastle goalkeeper Karl Darlow and Mane was only denied a clear strike into the net by Fabian Schar‘s goal-line clearance in the second-half.

But the goal didn’t come and Klopp even substituted the mis-firing Salah late in the game in an attempt to find a way through. Having lost defender Virgil van Dijk and Joe Gomez to long-term knee injuries earlier this season, the concern at Liverpool was that defensive problems would become the obstacle in their bid to retain the title. But the reality is that it is a lack of ruthlessness at the other end of the pitch that is holding Liverpool back.

A year ago, they blew the rest away because they were so good at killing teams off, but now, their failure to do that is keeping the title race alive.