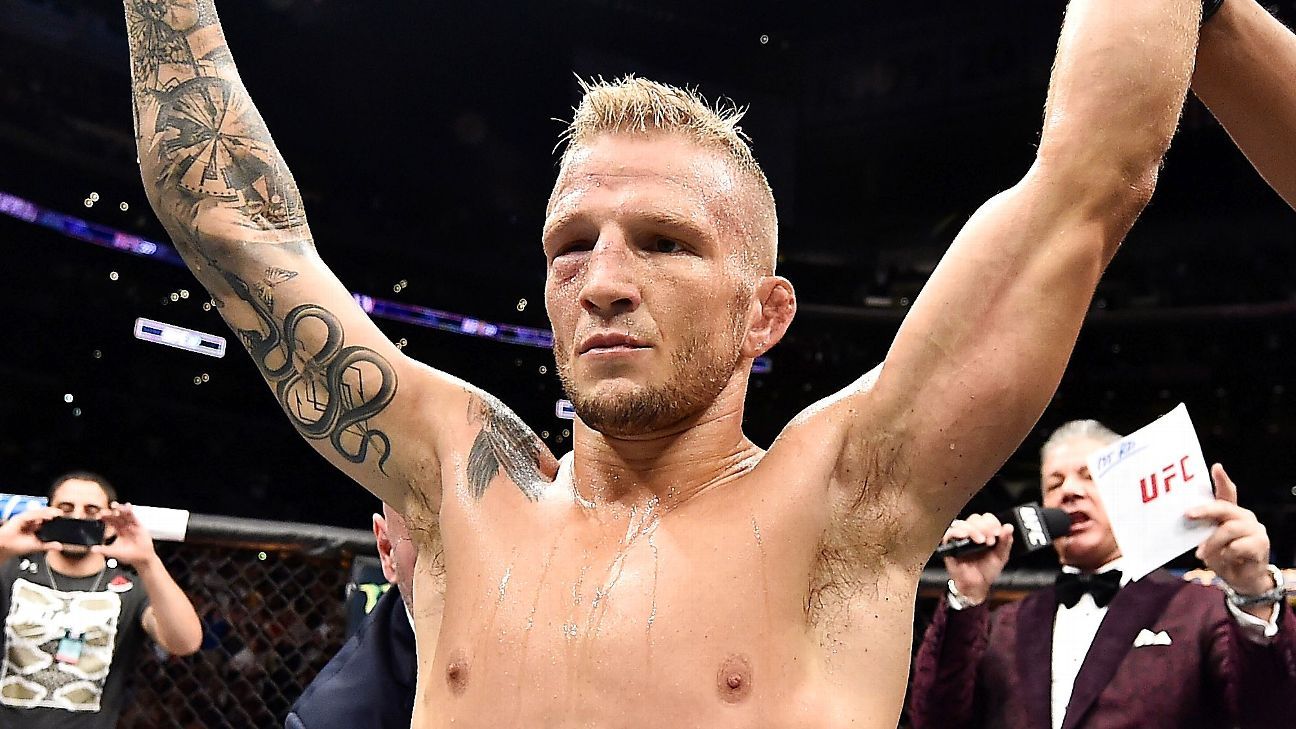 Canceled cards, fights that never materialized and careers put on hold punctuated what UFC president Dana White described as his most challenging year.

And while White was able to navigate the UFC through the pandemic with surprising success, several of his fighters will be looking at 2021 as a chance to put this year in the rear view, a shot at redemption.

From injury to a drug suspension, a controversial loss or simple inactivity, 2020 was a disappointing year for several fighters. ESPN’s panel of Brett Okamoto, Marc Raimondi and Jeff Wagenheim takes a look at six fighters — MMA’s Redeem Team — who want to forget about 2020 and find redemption in the new year.

Why 2020 was disappointing: So, to be fair, we knew this was going to be a disappointing year for Dillashaw, as he was suspended for its entirety due to a failed drug test in 2019. But the fact we knew about it coming in doesn’t make it any less disappointing. When Dillashaw was hit with a two-year suspension in 2019, he was the UFC bantamweight champion and a staple of the pound-for-pound list. We’re not talking about merely a good fighter who had to sit out all of 2020, we’re talking about a great one. One of the best in the world. Dillashaw has owned up to his actions and not made any excuses, but there’s no way around it: 2020 was as disappointing as it gets.

What redemption would look like in 2021: Nothing short of a full return to UFC royalty. Dillashaw tried to cheat. End of story. And although he deserves credit for the way he’s handled the consequences of that decision, he’s done a ton of harm to his reputation. To redeem himself, he has to prove he’s every bit the fighter he used to be. Because even though Dillashaw has said he never took a banned substance prior to his failed test in 2019 — and there is evidence that supports that — from a perception standpoint, he’s been labeled a cheater, and his previous accomplishments are now under scrutiny. He can repair that reputation, but to do it, he has to become a champion again in 2021.

Max Holloway says that as a competitor, his UFC 251 loss to Alexander Volkanovski doesn’t sit right, and Holloway wants them to fight 10 times to prove he’s better.

Why 2020 was disappointing: He did not reclaim the featherweight championship he lost to Alexander Volkanovski in 2019. Coming into 2020, that was priority No. 1 for Holloway. He’s established himself as one of the pound-for-pound best fighters in the world — and one of the most popular and respected athletes in the UFC — but from a strictly results-based standpoint, Holloway has been coming up short. Regardless of whether you think the judges robbed him of a win in his rematch against Volkanovski in 2020 — and there are plenty who do — Holloway finishing the year with an 0-1 record and no belt is the definition of disappointing. His performance at UFC 251 against Volkanovski was, arguably, very impressive. But this is a results-based industry, and we’ve come to think of Holloway as nothing other than a winner and a champion. And the record books show he was neither of those this year.

What redemption would look like in 2021: You could make the case that there is no fighter in the UFC more set up for redemption in 2021 than Holloway. He’ll kick off the year as a headliner of the UFC’s first event, when he meets Calvin Kattar on Jan. 16 on Fight Island. If Holloway wins, and looks good doing it, he would likely set up a shot against the winner of a title fight between Volkanovski and Brian Ortega, which is expected to take place in early 2021. And if Holloway wins that, the sky’s the limit. What if the lightweight division is settled by the end of the year, and Holloway were to move up to challenge the likes of Conor McGregor, Dustin Poirier, Michael Chandler — or whoever is holding the belt? What if he were to beat Kattar, and the cards fall to set up that trilogy with Volkanovski? And what if he were to make a statement in a third fight and beat Volkanovski in a way that leaves no doubt? There are a lot of different, great possibilities for Holloway in 2021. If he wins, he’ll find his redemption from 2020 and then some.

Why 2020 was disappointing: June 6. That was the date of Calderwood’s title shot — which ended up not happening. It was all lined up for JoJo, the culmination of six years in the UFC. But when flyweight champion Valentina Shevchenko was injured in the spring, the fight booking fell apart. Calderwood could have waited for the champ to heal and reschedule, but there’s risk in sitting idle while other 125-pounders are enhancing their resumes. So Calderwood agreed to an August meeting with Jennifer Maia, who was ranked below her — but didn’t look the part on fight night. Maia took it to Calderwood from the start, finishing her in the first round with an armbar. Calderwood didn’t look like herself in the fight, and backstage afterward she fainted and had to be rushed to a hospital, her heart rate dropping. She was quickly stabilized, and there were no reports of lingering effects. But Calderwood has not fought since.

What redemption would look like in 2021: A Jan. 23 victory would be a good start. Calderwood is scheduled to return that night against Jessica Eye, and beating a former title challenger would put JoJo right back in the mix. She is No. 5 in the ESPN women’s flyweight rankings, behind only the champ, two women who’ve already had their shot and an ex-strawweight titlist who has asserted herself at 125 pounds. Calderwood might be right behind that former 115-pounder, Jessica Andrade, in the queue for gold. If not, one additional win should do the trick for Calderwood, and getting the redemption tour started before 2021 is a month old allows for the possibility of her reaching the top of the mountain before the end of the year. Calderwood, a 33-year-old Scotswoman now living and training in Las Vegas, has all of the necessary tools. Can she avoid seeing them slip from her grasp this time?

Why 2020 was disappointing: Nothing happened — nothing but a bunch of fishing trips. That might have been fine with Gillespie, the self-proclaimed “best fisherman in MMA,” but in 2020 his nickname could just as well have been “best fisherman, period” because there was no MMA for him. After suffering his first career defeat in November 2019, Gillespie sat out all of 2020. So the first-round head kick he absorbed from Kevin Lee remains Gillespie’s most recent Octagon memory. That has to leave a bitter taste, especially in light of Lee’s lack of success in other recent fights. It was the type of loss that a fighter should want to bounce back from as soon as possible, and Gillespie has not done so, leaving lingering questions about his potential as a contender.

What redemption would look like in 2021: The UFC lightweight division has seen its share of dominance on the canvas. Khabib Nurmagomedov became champion and remains so largely on the strength of his grappling control. He has spent 54.6% of his fight time in control of his opponent, which puts him at No. 2 among active 155-pounders. Who’s No. 1? That’d be Gillespie, at a whopping 75.8%. Among active lightweights, Gillespie also has the highest top position percentage (53.9%) and lowest bottom position percentage (0.27%). So we know he’s as elite a grappler as there is in the division. Now it is his job to show that he’s not one-dimensional. Gillespie needs to get back in the cage with someone who has striking chops and some ability to fend off takedowns, and he needs to get back to his old dominance. That’s Step 1. The lightweight division is too packed with talent for Gillespie to expect a title shot in 2021, but at age 33 he needs to get moving in that direction.

Why 2020 was disappointing: At the end of 2018, Ponzinibbio looked like a future title challenger in the UFC welterweight division — maybe even a future champion. He was riding high off a fourth-round knockout of Neil Magny, a masterclass performance in front of his hometown fans in Buenos Aires, Argentina, on Nov. 17, 2018. With seven straight wins, Ponzinibbio was looking at a huge 2019. But more than two years later, he has not fought since. Ponzinibbio dealt with multiple bacterial infections and spent significant time in the hospital. Once primed for a big 2020 comeback, it ended up being another lost year for the electric South American striker.

What redemption would look like in 2021: For Ponzinibbio, redemption is almost as simple as just getting back into the Octagon. He is expected to do that on the first card of the year, a Jan. 16 date with Li Jingliang in Abu Dhabi. Li is a very tough matchup for someone who has been out of action for 26 months. But if Ponzinibbio is back to his old self, that’s a winnable fight. A victory would give him eight straight wins and he’d likely be jolted into a contender bout in a deep welterweight division. With some big performances, we could be discussing Ponzinibbio being in the title picture by the end of the year. His coaches at American Top Team remain very high on him. But even without those lofty goals, just being healthy and an active member of the UFC roster in 2021 is a massive win for the talented Ponzinibbio.

Why 2020 was disappointing: Since she won The Ultimate Fighter in 2016, many pundits tabbed Suarez as a future UFC strawweight champion. She seemed well on her way to that in 2019 before suffering a neck injury that has kept her out the last 19 months. Suarez has dealt with a bad neck before. In 2012, while training for the Olympics as a wrestler, the California native had a disc issue and was also diagnosed with thyroid cancer. Suarez was still able to train and stay fit in 2020, but her neck kept her out of the Octagon.

What redemption would look like in 2021: Suarez tells ESPN that her neck seems to be getting better and she’s hoping for a return to competition in 2021. Her next fight should probably be one with major stakes in the women’s 115-pound division. Suarez is 8-0 as a pro fighter and has dominated just about every round. She is a world-class wrestler and fantastic athlete. Again, for years she has been expected to become UFC champion. That’s not completely out of play for Suarez in 2021. But first, she needs to fully heal her injury and make it back into the cage. If history is any indication, once she steps in there and the door closes behind her, the rest will take care of itself.