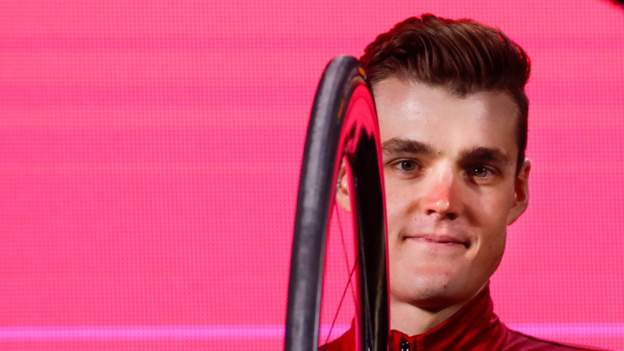 A typically serene, sun-dappled day on the island of Tenerife – where the gentle breeze drifts up from the beautiful volcanic coastline – greets another Ineos training day.Until the tranquillity is shattered by the wails and screams of a man in his bedroom, shouting in fear.Famously shy and unassuming four-time Tour de France champion Chris Froome has prompted the outburst – unexpectedly exposing an Ineos Grenadiers staff member to some of the island’s wildlife, which terrifies him.”Froome likes to make some jokes,” laughs Russian rider Pavel Sivakov.”The member of staff is a big, tough guy who looks like you wouldn’t want to mess with him!”Sivakov, 23, is a product of Ineos’ deep talent pool. And the team’s sense of fun has always been a part of their formula for success. But Sivakov has already been through enough to know life with a leading team is not always a laugh.

It’s fair to say fun would not be a word used by the Ineos hierarchy to describe the 2020 Tour de France – defending champion Egan Bernal’s capitulation on stage 15 would have been as much of a shock to the team as it was to those watching.

After seven Tour de France victories in the previous eight years, lessons from this year have been learned…

But Sivakov believes the pedigree he keeps company with is invaluable in helping to bring such a successful team back to its very best.

“I know how hard Froome works. Last year and this year even more, when you spend time with guys like him and G [Geraint Thomas] and Kwiato [Michal Kwiatkowski] and Dylan [van Baarle]… experienced guys for me, a young man in the sport, it’s all you can wish for. There are so many things to take from all of them.”

With that guidance Sivakov has the potential to become another of Ineos’ main riders to win overall classifications at Grand Tours.

And he shone more than most on this year’s Tour. Following two crashes on the treacherous stage one in Nice, it looked like he would abandon the race, covered in bruises and road rash as he was, but he soldiered on to the end, growing stronger in his domestique role.

Given the departure of the mischievous Froome to Israel Start-Up Nation in 2021, it’s a role he may be promoted from before too long.

“I put myself under pressure to perform – I don’t want to be good in training and crap in the races. Winning a Tour [de France] would be my biggest dream – that’s something to dream of if I had one thing to win.”

So why does a Russian rider have quite such an affinity with the Tour? Because he’s basically French.

Born to two Russian professional cyclists, Sivakov has never lived in Russia, and grew up in France – passionately playing several sports. But it was a moment when he could have been overawed by an occasion and most expected him to fail – just like on stage one this year – where he made his presence and potential felt.

“When I was 12 or 13 I went for a ride in the Pyrenees with a cycling club. I had a mountain bike, with slick tyres. Everyone else was on proper equipment, but guys were getting dropped before me. I felt straight away I was good, and when you’re good at something you want to do it more.

“My parents probably helped me much more when they realised I wanted to do it. They were not super successful and did not make millions.”

Being at a team such as Ineos, Sivakov is proving to his ex-pro parents that he is already making his presence felt at the top level. But it’s not without sacrifice.

“It’s not an easy life. I really love it, but it’s not easy. There is no social life, and you are training on a day-to-day basis. You have to recover, and if you are on a training block it’s not a good idea even to go for a meal.

“You wake up some days feeling terrible, having to do some efforts. And then you crash…”

It wasn’t just at the Tour he had to quickly overcome the shock of hitting the deck with about 2mm of Lycra to protect you.

During August’s Criterium du Dauphine warm-up race, Sivakov lost the bike on a damp corner and his head and helmet hit the tarmac with real force.

Sivakov simply picked himself up, carried on climbing and finished fourth on the day.

But French rider Romain Bardet’s brain haemorrhage on stage 13 of this year’s Tour – which was only identified, along with severe concussion, after he finished the stage – raised fresh questions over safety in cycling.

“Yeah, it’s scary. But it’s a part of cycling – you can’t think too much how dangerous a sport it is,” said Sivakov.

“Starting a stage you look at some parts and the briefing and you see dangerous places, downhills – this is going to be dodgy and you just go into it.

“It’s a special life, and a different life. You need to be crazy to be a rider.”

It’s a life worth pursuing when a team such as Ineos believes in your ability. In the future Sivakov may be in the yellow jersey. He may even be part of safer bike races.