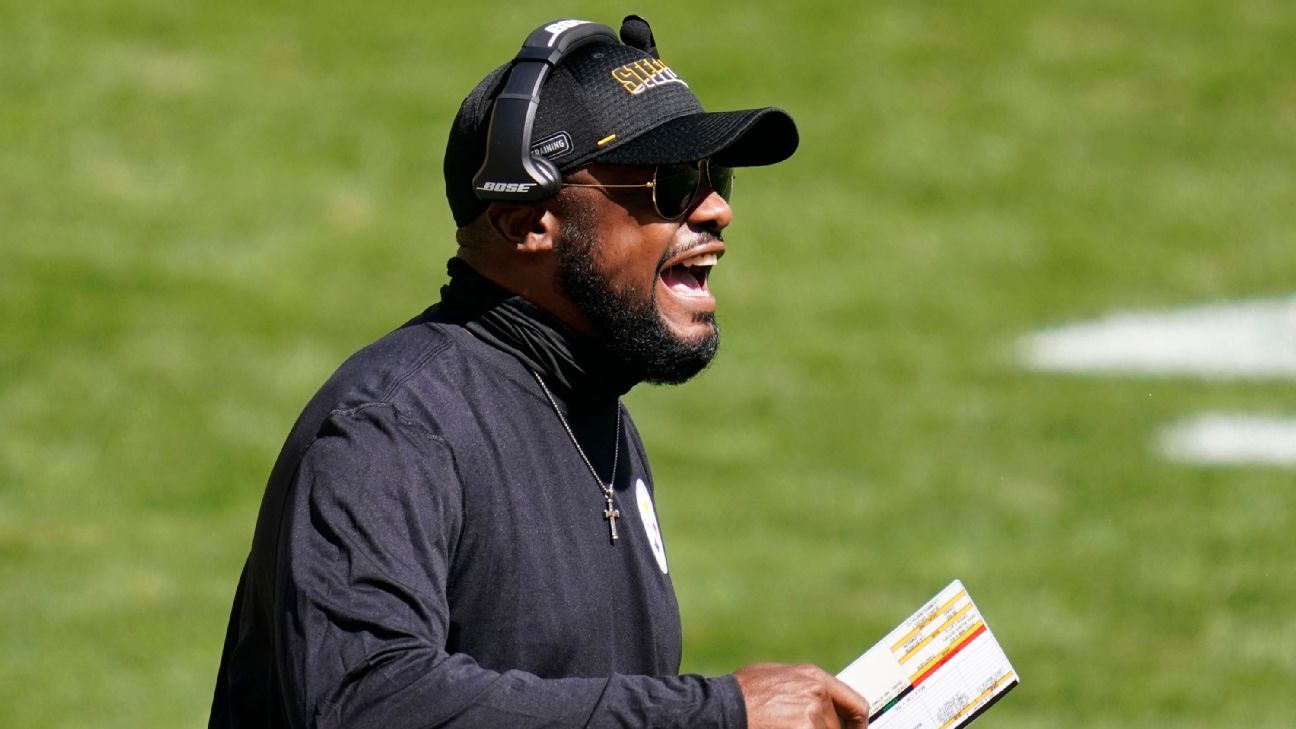 PITTSBURGH — In more than a decade as the Pittsburgh Steelers‘ coach, Mike Tomlin’s index of signature sayings has grown every season.

And for the first time — at least in recent memory — he debuted a new one as he described the difference in his team from the first half to the second in the aftermath of the Steelers’ 28-24 comeback victory over the Indianapolis Colts on Sunday.

“It’s a fine line between drinking wine and squashing grapes, as we say in this business,” Tomlin said, not a laugh or hint of sarcasm in his voice.

Wait, what? Who says that in this business?

Only one man in the NFL utters phrases like that, and he’s been the head coach of the Steelers for the past 14 seasons. In using catchphrases, slogans and mantras, Tomlin, 48, effectively communicates with his players and the media members who cover his team. The phrasing is different from the locker room to the news conferences, but Tomlin’s approach is consistent.

“He understands that that is all part of this great game. And so he’s found a way to get his voice out there, not only to the fans and to the public, or even the ownership, but also to his players. And he’s very smart about it. He spends time on it. The guy loves football, like deep down in his soul.”

In Tomlin, tight end Eric Ebron found something of a kindred spirit. Hard as it might be to believe given their differences in personality and approach with reporters, the fun-loving, candid Ebron instantly connected with the all-business coach.

And it’s all thanks to Tomlin’s mantras.

Tomlin’s constant reminder about the importance of game days is an especially meaningful message for Ebron.

“One of my favorite ones is, ‘We show up in stadiums,'” Ebron said. “To me, it resonated because it doesn’t matter what happened throughout the week, it doesn’t matter what’s going on in your life throughout the week. On Sunday or Thursday or whenever we play, when you’re in that stadium, it’s about everything going on with that football game. No matter what, whatever it is outside, whatever happened, whatever, we perform in stadiums.

“That kind of resonated with me, like game day is our day. It’s basically like our day to have fun, to go out there and enjoy it.”

Safety Minkah Fitzpatrick also latched on to one of his coach’s sayings — “Make it a great day” — after the Steelers acquired him in a trade early last season. Fitzpatrick didn’t understand what his coach meant at first, but the more he heard him, the more Tomlin’s saying stuck with him.

“It took me a little while to understand what he meant by it, and he explained it one day, it was kind of exactly what I said. He lives it. He has every excuse in the world to not work as hard as he does because he’s accomplished pretty much everything you can accomplish as a head coach in the NFL. Every single day he’s out here. He’s one of the first people in the building, one of the last people in the building, pays attention to all the details. He does the things to make it a great day.”

In a season that’s been anything but consistent, Tomlin’s sayings and method of messaging have been constants, creating the most stable environment possible in an ever-changing world.

Not all of his messages, though, are easy to understand. Some of his current and former players helped translate a couple of his most memorable Tomlinisms, used in his locker room and in news conferences.

What it means: “No one knows what the hell that truly means sometimes. It’s such a broad thing. And what it means for him is, there’s one singular goal every day, to be working toward a win. And no matter who’s on the field, no matter who you play against, that standard is an individual thing, but it’s also a thing that’s unique to your team.” — ESPN analyst and former Steelers defensive back Ryan Clark

What it means: “The kitchen, I think is just our everyday household. So in that household, it’s the Steelers organization. They’re focused on that AFC North kitchen. Baltimore, Cincinnati, Cleveland, that’s what’s in the kitchen, and that’s what you got to stir in the pot and eat and move forward.” — Keisel

‘I don’t do hypotheticals’

What it means: “It means he, like he ain’t into guessing, right? You’re going to deal with what’s in front of you. Don’t tell me there’s a chance. No, either it’s 100 percent, this is what we’re doing and this is how we’re going to figure it out, or we’re not discussing it. … He always said, ‘Talking to people about things they have no control over is sport bitching, you just talking.'” — Clark

‘Don’t be patient, just work while you wait’

What it means: “It was when I was on the practice squad last year, and he just would always try to encourage those guys. He said those words to me, and I didn’t really know exactly what he meant. I was like, ‘Yeah, I’m not going to be patient. I’m definitely going to keep working.’ I didn’t know when it was going to happen, and he probably didn’t know when it was going to happen, either. But that’s the beauty of it. Just keep working because once your opportunity does come, then you’ll be 100 percent ready.” — Steelers safety Marcus Allen

Make your picks throughout the playoffs and compete for $30,000! Make Your Picks

Tomlin went back to a favorite saying in his weekly availability Tuesday as he described the Steelers’ mentality going into a Week 17 matchup with the Cleveland Browns, featuring Mason Rudolph and not Ben Roethlisberger as the starting quarterback. It’s the phrase that’s screen-printed on team T-shirts and displayed on the walls of Heinz Field.

“We intend to do our job,” he said. “We intend to prepare with that mindset. And ultimately lead us to that destination. We’re not seeking comfort. We’re not grading ourselves on a curve. This game is on the schedule and so the guys that will be on the field will represent us in the standard that is the Pittsburgh Steelers will be the standard.”

But what does Tomlin mean when he says “the standard is the standard?” Allow the coach to explain in his own words.

“What I mean specifically is our job is to win,” he said Tuesday. “Maybe the formula looks a little bit different. Maybe the process is a little bit more uncomfortable based on circumstances and so forth, but the bottom line: Football is our game, our business is winning and our intentions are to handle business. That’s what the standard is the standard means every single time I say it.”