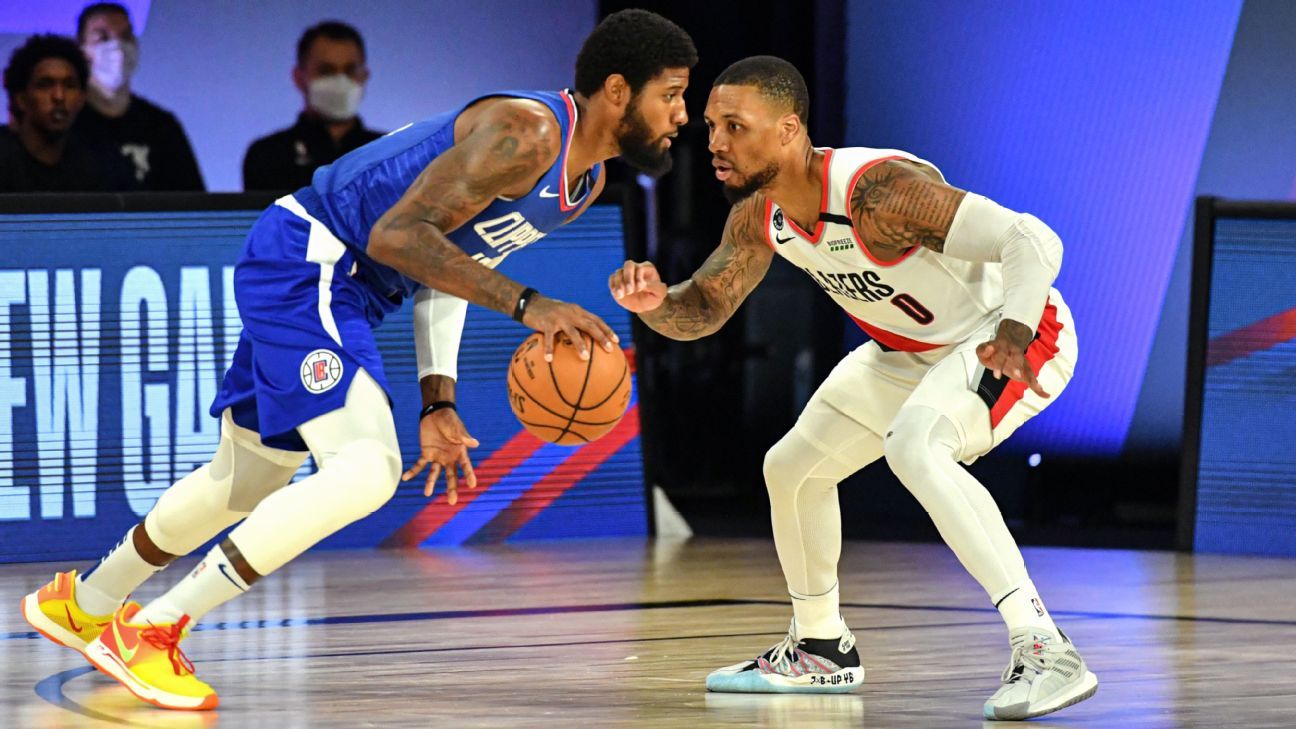 In terms of NBA beef, Paul George vs. Damian Lillard seemed to be an unlikely rivalry — at least one that seemingly came out of nowhere.

But with one wave goodbye three seasons ago, the George-Lillard conflict was born. It’s got everything an NBA dispute needs — on-court trash talk, antics and social media back-and-forth.

In the bubble in Orlando, Florida, it reached its crescendo, to the point of family members reportedly getting involved. George purportedly reached out to Lillard to try to clear the air, but the strife was already set.

With the Portland Trail Blazers and LA Clippers set to match up on Wednesday for the first time this season, you might be wondering: How did it get to this point?

“I don’t care what anybody says, that’s a bad shot.”

As Lillard crossed half court at a jog, George picked up him, some 45 feet from the basket. It was April 2019, in the opening round of the playoffs, with George’s Thunder taking on the Blazers and down 3-1 in the series.

With Portland banged up and without center Jusuf Nurkic, who had suffered a broken leg a few weeks earlier, the Thunder were favored, but Lillard had been scorching them throughout the series, particularly with 30-foot missiles from the logos. Keenly aware of this, George was on Lillard the moment he crossed half court.

George closed the gap as Lillard circled out, letting the clock tick. The other eight players spaced out wide, leaving Lillard and George on an island, one-on-one.

George settled into a low defensive stance with 5 seconds left as Lillard crossed the ball back and forth, right to left, left to right.

George glanced at the clock at the other end of the floor. With 3 seconds left, he took another half step toward Lillard, who used a hard escape dribble and hopped to his right, clearing a glimpse of space between him and George.

George could see it coming as Lillard rocked back into his shooting motion. The ball left Lillard’s hand with 1.5 seconds on the clock. Officially, it was listed as a 37-footer. But it hung in the rafters for what felt like five minutes, and as time goes on, a foot or two gets added by the year.

The horn sounded as the ball dropped through the net, sending the Moda Center into mayhem and the Thunder home in five games. Lillard simply waved to the Thunder bench.

It had some meaning. Because you have to understand why Lillard waved in the first place. There’s always been an intense rivalry between Lillard and Russell Westbrook — fierce divisional competitors who guard each other. Westbrook loves to chirp, mock and gesture, and he would do it often against Lillard, with his rock-the-baby routine after scoring on post-ups. Throughout the series, the trash talk intensified, with Dennis Schroder mimicking Lillard’s signature wrist-tapping gesture during Game 3.

Damian Lillard says him waving goodbye to the Thunder after his buzzer-beater was in response to OKC’s celebrations after Game 3 win.

“The series was over. That was it,” Lillard said of his wave. “After Game 3, Dennis Schroder was out there pointing to his wrist. They was out there doing all these celebrations and doing all this stuff. After one win. We was like, ‘OK, what we want to do is win four games. When we win those four games, there’s not going to be nothing to talk about.

“There’s been a lot of back and forth, a lot of talk and all this stuff, and that was the last word.”

George, now a part of an iconic scene in NBA history, had something to say following the game about the shot.

“That’s a bad, bad shot,” George said. “I don’t care what anybody says. That’s a bad shot. But hey, he made it. That story won’t be told that it was a bad shot. We live with that.”

“I sent [Patrick Beverley] home before … Paul George just got sent home by me last year in the playoffs.”

An 88.9% career free throw shooter, Lillard stepped to the line with 18.6 seconds left and the Blazers down one. It was last August, and the Blazers were in the heat of trying to claw their way into the 8-seed inside the NBA’s Orlando bubble. They were playing the Clippers, who had already locked in their position for the postseason and were confident of making a deep run as a title favorite.

Lillard missed the first free throw. For a player who has built a sturdy reputation as a reliable clutch performer, it was surprising. Missing the second free throw was stunning.

On the Clippers’ bench, Beverley, who was sitting the game out because of a minor injury, took great apparent pleasure in Lillard’s misses. He talked. He laughed. He tapped his wrist to mock “Dame Time.” Other Clippers, like George, got in on it.

“After I missed the first one I heard them over there yelling,” Lillard said. “To me that just shows what they expect from me down the stretch. They know what I do. [Beverley] saw it firsthand when I was a second-year player when he was in Houston. I’m sure he has a great memory of that.”

Damian Lillard contends that Patrick Beverley and Paul George trolling him after his misses is a sign of respect and points out he’s sent both home in the playoffs.

Apparently, George waved at Lillard at some point in all of it. Lillard was asked about it.

“He experienced getting waved at last year,” Lillard said. “I’m not offended by it. If anything, it should just tell you how much it hurt them, to go through what I put them through in those situations.”

“And you getting sent home this year. Respect,” George commented.

Lillard’s response: “Keep switching teams … running from the grind. You boys is chumps.”

Beverley responded to the response: “Cancun on 3” with three laughing-face emojis. George followed it by trying to remind Lillard of some previous postseason success. “Respect that too in my stint with my first team I had more success … Dame time running out g.”

The fuse had been lit.

“I guess I should extend this Cancun invite.”

As they’d done the previous two games, the Clippers built a double-digit lead and appeared to be on their way to their first appearance in the Western Conference finals.

It was Game 7 against the Denver Nuggets, and after building a 3-1 series lead, things were down to a winner-take-all situation because of blown leads by the Clippers in Games 5 and 6. But those two games were anomalies. Game 7s are where the better team typically prevails.

The Nuggets trimmed an 11-point deficit to two heading into halftime. Three minutes into the third, Denver had taken the lead. The Nuggets had control heading to the fourth quarter — up 82-74 — but again, with closers such as George and Kawhi Leonard, the Clippers could tell themselves they were fine. They were not.

Four minutes into the fourth, the Clippers were down 14 and visibly rattled. Their offense turned to mush, with forced jumpers, static ball movement and uneven possessions.

Neither team scored the next three minutes. The Nuggets had tightened, but the Clippers were lost. It was turning into a public shaming of the Clippers’ collapse, with the social media roasts coming in rapid fire.

I’ll bring the wine 🍷 . Weather nice as ever too https://t.co/oE0d6gPBPy

Look good to me https://t.co/nw3YU9TKFl

Flashing their chemistry both on and off the court, Lillard and Blazers backcourt mate CJ McCollum jumped into the mix. The Nuggets went up 20 and McCollum tagged Lillard in a question asking if he had an extra villa available in Cabo. Lillard replied with a line of laughing faces. McCollum gave travel tips and wondered aloud if the Clippers had packed before the game. Probably about the time George infamously hit the side of the backboard on a corner 3 — the enduring moment of the Clippers’ collapse — McCollum posted a string of laughing faces with “bruuuuh.”

Someone tweeted at Lillard a link to George’s embarrassing miss and asked if it was a good shot. “Look good to me,” Lillard replied.

Close to the final buzzer, Lillard tweeted at Beverley: “I guess I should extend this Cancun invite since I haven’t made my arrangements yet,” complete with three laughing emojis.

A long offseason was ahead for George and the Clippers.

During a video media availability, George made a declarative statement that caught some attention.

“I want to retire a Clipper,” he said. “This is where my heart is and I’m happy.”

One Instagram account put George’s quote with two similar statements he made with the Indiana Pacers and Oklahoma City Thunder. Lillard saw it and made a comment.

The meaning: “Cap” is slang for something being a lie. Lillard’s point was about the history George has with saying he wanted to be somewhere, only to ask for a trade later.

On the Pacers: “My goal is to win one here. I never want to leave Indy.” He requested a trade a few months later and was dealt to Oklahoma City.

When he re-signed with the Thunder, stunning many, he said to OKC fans from a stage, “I’m here to stay. We can bring this thing home.”

Part of Lillard’s identity as a player is in his unrelenting loyalty to the Blazers. He has made it clear — repeatedly — that he has no wandering eye on bigger markets and isn’t the type of player to make clandestine calls to try to pair up elsewhere with another star. He is fully committed to winning in Portland. And he has made it a point to keep his word.

And maybe that is the true heart of the beef.