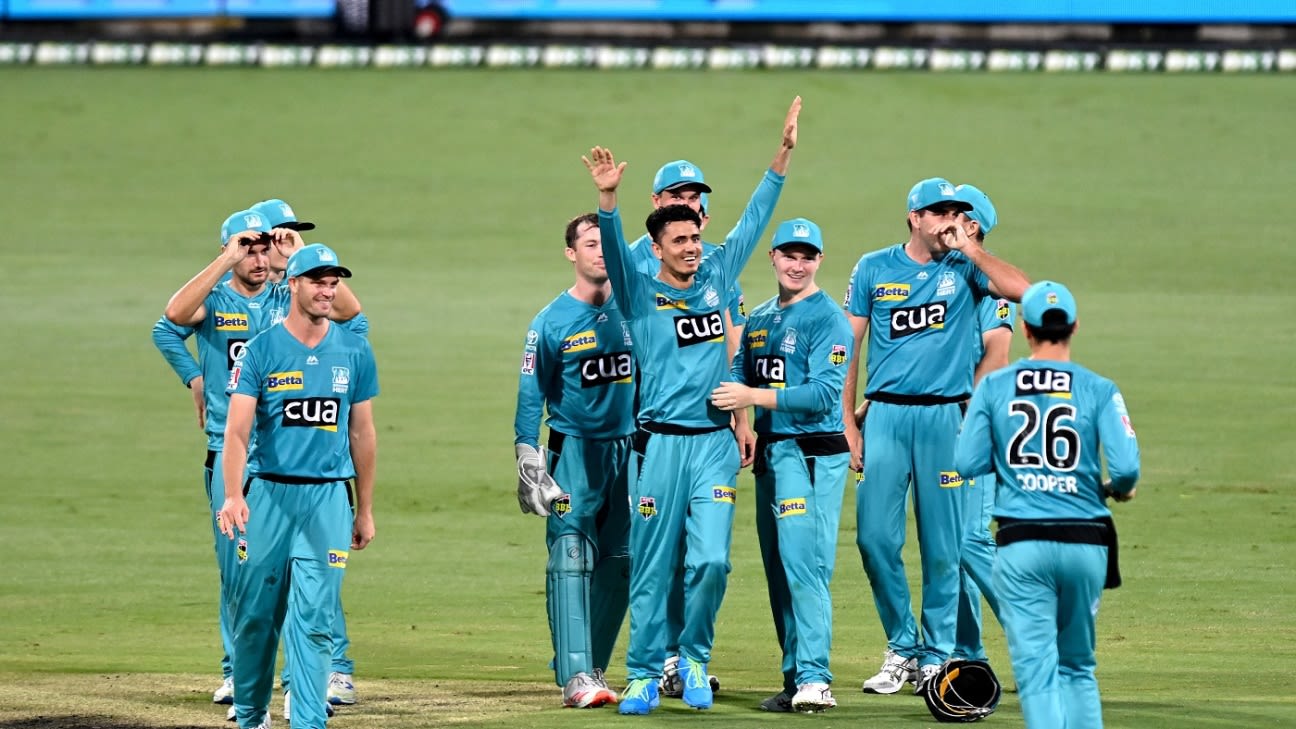 Mujeeb Ur Rahman’s maiden five-wicket haul in T20 cricket went in vain as Hobart Hurricanes not only pulled off a one-run victory but also picked up the Bash Boost point against Brisbane Heat.

With the Heat needing seven from the final over with three wickets in hand, Scott Boland held his nerve against James Bazley and Mark Steketee. Delivering a mix of low full tosses and slower balls, he brought it down to the final ball. With two required, Steketee hit the shin-high full toss to extra cover, where Colin Ingram dived to his left and, after a brief fumble, hit the stumps direct at the bowler’s end. Steketee put in a dive but his bat bounced off the turf – from inches outside the crease – and was in the air when the ball hit the stumps.

In a game where momentum swung on more than one occasion, Hurricanes were 136 for 5 at one stage before being all out for 150 in 19.4 overs. They had delayed the Power Surge till the very end but Mujeeb quashed their hopes of a strong finish in the 19th over, where only a wide denied him a hat-trick and a triple-wicket maiden.

It wasn’t a tall chase but the Hurricanes bowled attacking lines and lengths to reduce the Heat to 3 for 8. Max Bryant and Lewis Gregory staged a recovery and at one stage, the Heat needed 35 off 30 balls with five wickets in hand. But they once again failed to seize the advantage and lost two wickets in the next two overs. Bazley and Steketee brought them back in the contest only to slip at the last hurdle.

D’Arcy Short’s lean run in BBL 2020-21 continued as he bagged his second duck of the season, nicking Xavier Bartlett behind on the second ball of the match. In six innings so far in the tournament, Short has scored only 102 runs at an average of 17. In fact, 72 of those runs came in one innings.

Hurricanes were 1 for 6 in two overs when Dawid Malan gave a glimpse of why he is the top-ranked T20I batsman in the world. After his usual settling-in period – he was 7 off 7 at one stage – Malan struck four fours in Bartlett’s one over.

The Heat had a chance to end this carnage in the very next over when Malan sliced Jack Wildermuth towards backward point but Sam Heazlett dropped a straightforward catch. Mujeeb, though, gave them something to cheer about soon after. Ben McDermott, who was struggling till then, tried to pull the spinner’s first ball but missed the googly completely and was bowled.

That put the brakes on the scoring rate even though Peter Handscomb was quick off the blocks. The 37-run stand, off 32 balls, between Malan and Handscomb came to an end when Handscomb flicked Wildermuth on to his stumps. And despite having a top five with international experience, the Hurricanes could manage only 65 for 3 in the first ten overs.

Malan and Ingram knew they needed to step up. Malan tried to hit Mujeeb through the covers in that pursuit only to be bowled. Ingram was offered two lives by Wildermuth but he too failed to capitalise and ended up flicking Steketee straight to deep-backward square leg for a 21-ball 24.

Tim David struck two monstrous sixes off Gregory in the 17th over but the Hurricanes’ lower order had no answer to Mujeeb’s variations. Keemo Paul was caught and bowled off a carrom ball while Wil Parker and Boland were bowled for first-ball ducks off googlies, all in the 19th over.

If Mujeeb rocked the Hurricanes’ lower order, Riley Meredith and Boland did the same to the Heat’s top, reducing them to 3 for 8 in the third over of the chase. Heazlett and Wildermuth departed without opening their accounts while Tom Cooper was bowled for 1. Unperturbed by the wickets falling around him, Bryant kept finding boundaries and added 52 in just 6.1 overs along with Gregory.

Just like the Heat, the Hurricanes were also generous in the field, handing Gregory and Bryant a life each. First, Parker grassed Gregory off Ellis at third man and in the next over, McDermott failed to latch on to a catch from Bryant, off Parker. Bryant then struck a four and a six off consecutive balls off Paul, and with six needed from eight balls, it looked like the Heat had the Bash Boost point in their pocket. Bryant fell on the next ball but Gregory and captain Jimmy Peirson showed no urgency in the tenth over, bowled by Short, and the Heat fell two short of the mid-way point target.

The Heat needed 73 from eight overs with five wickets in hand but then Paul lost his radar. He started the 13th over of the innings with two waist-high full tosses. Only the second one, however, was deemed dangerous and Paul was allowed to continue. He ended up giving away 20 runs as Bazley hit three fours and brought the equation down to 53 required from 42 balls.

Peirson lost his wicket while going for a big hit while Milenko didn’t last long either and suddenly the Heat were 7 for 128, needing 23 needed from 14. Steketee hammered Meredith for back-to-back fours and Bazley smashed a six off Ellis in the next over to make the Heat favourites again before the one final twist in the 20th over.

Hemant Brar is a sub-editor at ESPNcricinfo