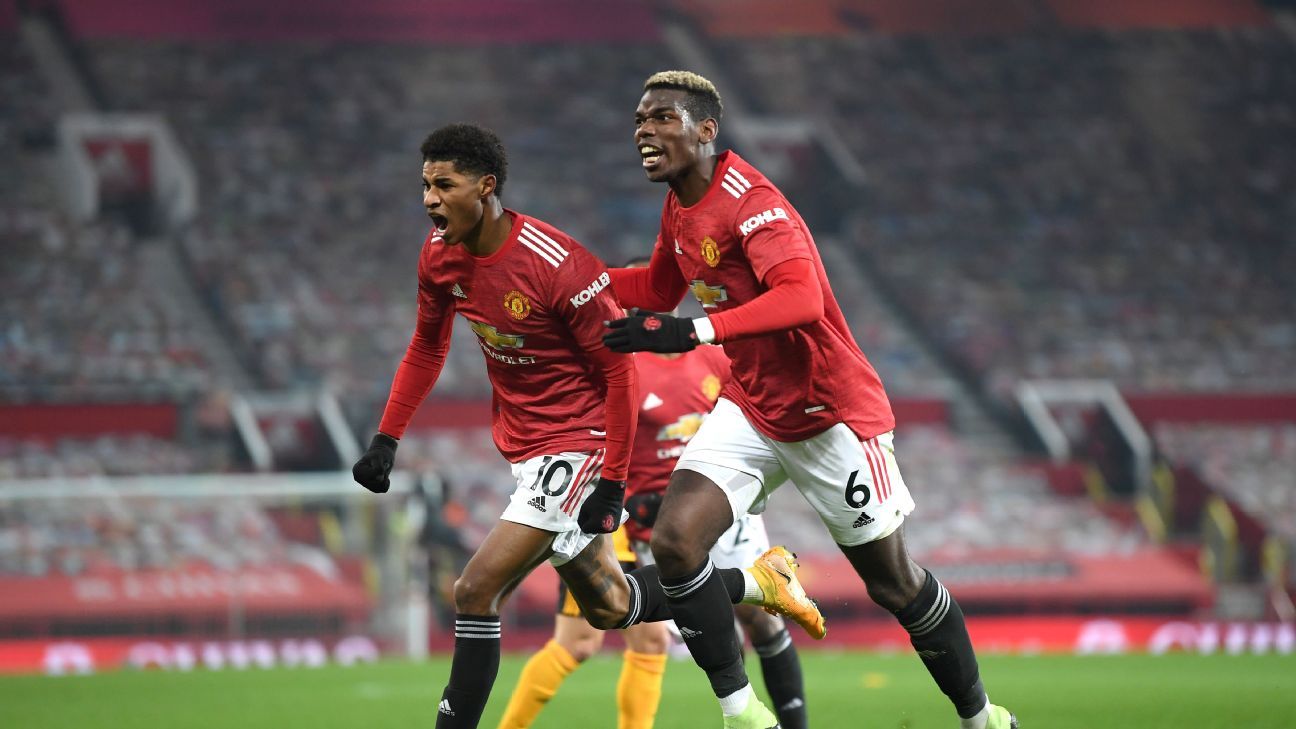 MANCHESTER, England — Ole Gunnar Solskjaer has been keen to play down Manchester United‘s chances of challenging for the title but he will know better than most that it is results like this scrappy 1-0 win over Wolves that mark out teams capable of winning championships.

Having won six titles as a player at Old Trafford, Solskjaer will have come to appreciate the importance of a narrow victory in the middle of these gruelling winter fixture lists.

For 90 minutes here against Wolves, United managed just two shots on target. But their third of the night, a Marcus Rashford effort which took a heavy deflection off Romain Saiss in the third minute of stoppage time, went in and Solskjaer’s team are now second in the Premier League table, just two points behind Liverpool.

Solskjaer and the rest of the home bench almost seemed surprised when the ball went in after a game which lacked many clear chances and looked destined to end in a fourth draw in the last five meetings between these two teams. The Norwegian, though, can be happy that his players at least showed the desire to score a winner — if not always the ability — and it was Bruno Fernandes forcing the ball forward as the clock ticked down that eventually led to Rashford’s winner.

Since losing to Arsenal in November, United have taken 23 points from a possible 27 and that trip to Anfield to play Liverpool on Jan. 17 is looking more and more critical. It has been a long time since United were involved in such a crucial game at the top of the table.

“We just focus on the next game. I am very boring but we cannot get too far ahead of ourselves,” the Norwegian added. “We have got to a decent position at the moment but the season hasn’t even reached halfway.

“We didn’t perform as well as we want to but we won a game against a very difficult side to play against. It’s the first win in the league for me against them. There have never been many goals in the games but for me, this is a big step forward, that you don’t play well but you win.”

If United are to emerge as Liverpool’s most serious challengers, they will have to find a way to be more creative at home. For much of the evening, Wolves looked happy to leave with a point and it was telling that referee Jon Moss felt the need to book goalkeeper Rui Patricio for time-wasting with the best part of 20 minutes left to play.

Despite Solskjaer using the full extent of his attacking arsenal, a combination of Rashford, Fernandes, Mason Greenwood, Anthony Martial, Edinson Cavani and Paul Pogba only forced Patricio into two significant saves before the winner and United will not always be able to rely on deflections in injury time to win a game. But that is a debate for another time.

After the disappointment of conceding a late equaliser against Leicester on Boxing Day, they bounced back with a crucial victory in a massive game in difficult circumstances. If the draw at the King Power Stadium was a missed opportunity, this time United were able to capitalise after both Chelsea and Leicester dropped points a day earlier. It was also a game they could quite easily have lost this time last year.

“We’re a different outfit now,” said Solskjaer. “We’re better mentally and physically. That belief has come through performances, results and players we have on the pitch that can change games in a second.

“We brought it up in pre-season that we need to add more points towards the end of games and we’ve done that a few times this season as well. Physically we last games more.”

Victory over Wolves ended 2020 on a high and afterwards, Solskjaer ended one of his interviews by saying: “We have plenty to look forward to in 2021.” The foundation has been set for a first title challenge in seven years, even if the United boss is not ready to admit it just yet.

“There’s no title race after 15 games,” he said. “You can lose the chance of being in a race in the first 10 games, of course you can, but play another 15 — get to 30 games — and maybe we can start talking about a title race.

“The belief is there, we’ve shown what we’re capable of and this result is massive for confidence.”