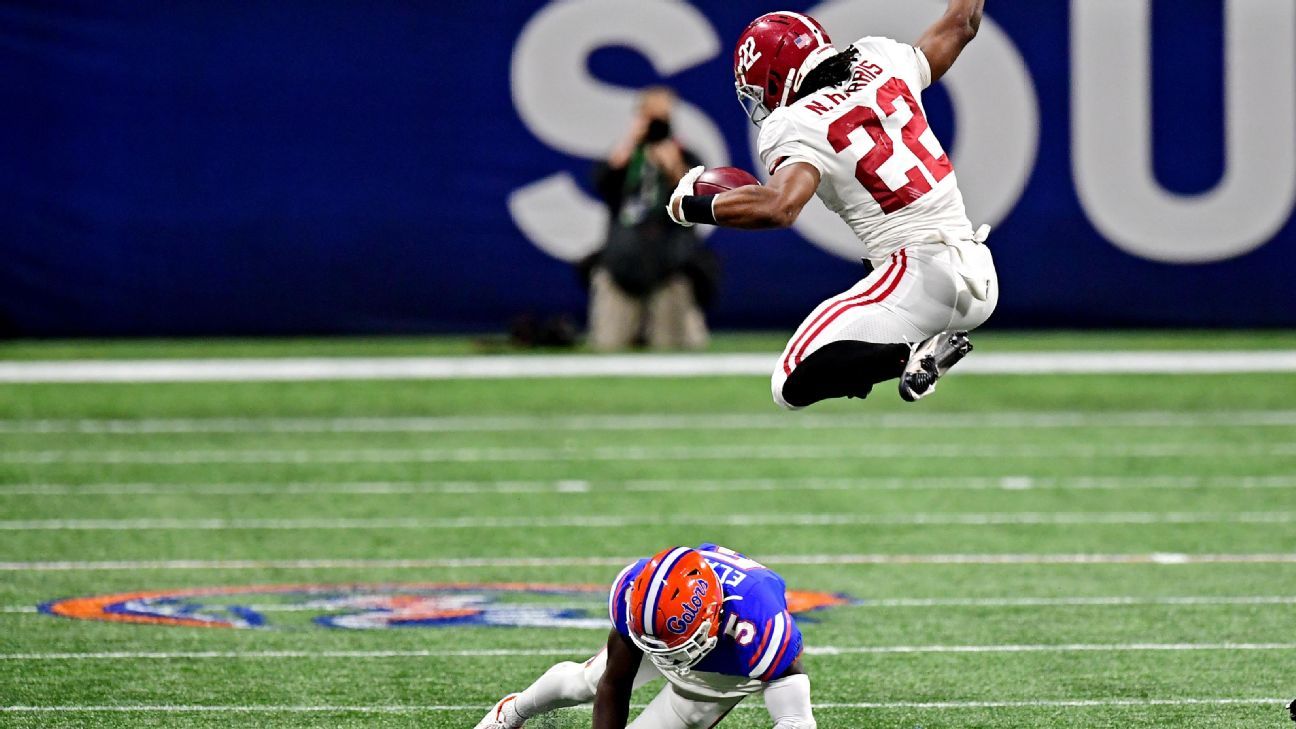 Maybe it’s because of the uniform he wears or the fact that he checks in at an imposing 6-foot-2, 230 pounds that people seem to have a preconceived notion of the kind of running back Najee Harris is.

The senior from Antioch, California, is well aware of this. He ran for 1,262 yards and caught 27 passes for Alabama last year, and yet he heard the doubts.

In a recent interview with SEC Network, Harris recounted those supposed knocks and then asked incredulously, “Have you seen the film?”

Harris smiled as he said that and smiled again after the SEC championship game on Dec. 19 when he was asked whether proving he could catch the ball was one of the reasons he returned for his senior year rather than enter the NFL draft early. He had just caught three touchdowns in the win over Florida, making him Alabama’s career total touchdowns leader with 54, and he wasn’t buying the premise of the question.

“What are you talking about, man?” Harris said playfully. “It’s just because I’m a running back so people don’t expect it. … The slogan is, ‘Well, can he catch?’ I’ve been catching the ball since I was in the fetus position.”

Clever retorts aside, Harris hasn’t been catching passes since birth, as he claimed. Nor was he delivered by stork to Alabama four years ago as the most complete running back to ever play under coach Nick Saban.

That took time, patience and hard work to achieve.

Mike Locksley was offensive coordinator during Harris’ first two seasons at Alabama, and he remembers a young running back who relied on his natural abilities. Sure, Harris was big, powerful and fast, but he wasn’t refined in terms of understanding pass protection or route running.

Locksley tried to spread the ball around to all his playmakers, but, “Of course he wanted all the touches.”

Harris grew frustrated playing third fiddle to Damien Harris and Josh Jacobs. He had 61 carries as a freshman and told the San Francisco Chronicle he thought about transferring. His carries increased to 117 as a sophomore, but his workload waned the second half of the season as he averaged less than 5.6 rushes over the final seven games.

In his first two seasons, Harris caught only 10 passes.

Locksley credits Alabama analyst and former Tennessee head coach Butch Jones for playing a pivotal role mentoring Harris during that trying time. Harris, Locksley said, “had great respect for Butch,” who played running back in college and coached the position early in his career.

Jones helped keep Harris focused and working toward becoming an all-around back. As a junior, it paid off, as he blossomed into a more patient runner and stepped up as a blocker and pass-catcher.

But even that coming-out party, which featured 304 yards and seven touchdowns through the air, wasn’t enough to dispel the notion that he was a one-trick pony. Sure, he looked the part of a workhorse in the mold of predecessor Derrick Henry, but Harris was capable of much more.

Shortly after the season ended, Harris sent a private message on Twitter to former Auburn running back Brad Lester. The two had met briefly on the field after the Iron Bowl months earlier, and Harris wanted to see what the SEC running back turned trainer could do to help him improve.

Lester, who had worked with NFL backs Alvin Kamara and Chris Carson, drove to Tuscaloosa for that first training session wondering what he was getting himself into. He thought, “This guy’s a top-15 pick. How much better can I get him?”

Harris told Lester he had two primary goals: to get faster and get better in the passing game.

“His biggest problem was the problem of a lot of athletes,” Lester said. “I told him, ‘Stop trying so hard.'”

After that first weekend working out at the marching band’s practice field on campus, Harris rented a house in Atlanta where he trained with Lester for a few weeks, sometimes having as many as three workouts in a single day.

By running more freely, his mechanics improved, which helped his initial quickness. ESPN NFL draft expert Mel Kiper Jr. said he has noticed Harris progress in making people miss this season. Kiper compared him to Le’Veon Bell in that they both fool defenses with how quick they are.

Bowl Mania is back! Compete for $25,000 in guaranteed prizes!

The numbers back that assessment up, as Harris ranks first nationally in evaded tackles with 42, up from 29 last season.

Harris has become by far the most explosive running back to play under Saban at Alabama, with 128 career rushes of 10 or more yards — 40 of which have come this season. The next closest are Henry and T.J. Yeldon, who each have 99 such runs.

But Harris’ most noticeable improvement has come in the passing game, an area Lester said they worked on every day, either at the start of their workouts or at the close. One particularly trying exercise required Harris to stand on one leg on a balance ball while Lester circled him, throwing passes at random intervals.

The result: Through 11 games, Harris has racked up 32 receptions, which is more than any Alabama running back since 2009, when Mark Ingram II caught 32 passes in 14 games. Harris has dropped only one pass all year.

His 69 career receptions are the most at the position under Saban and are nearly twice the total of former All-SEC back Eddie Lacy.

Harris might have been molded into a more straight-ahead, move-the-sticks type of runner five years ago, Lester said. Alabama has had plenty of those guys through the years.

“But the game has changed,” Lester said. “He’s probably the most diverse back they’ve had.”

Locksley said the NFL has influenced the college game in terms of throwing more to tight ends and running backs. The matchup of a running back on a linebacker is one coordinators love to exploit, and it’s one Harris excels at.

“You’ve seen Najee develop himself from being just a runner to being a guy that now understands leverage and running routes and setting up the routes and finishing the catch,” he said. “I’ve been really impressed with how he’s matured in that phase of the game.”

On top of all that, Harris has turned into someone Saban said is “very good in pass protection.” It’s something the future Hall of Fame head coach said goes unnoticed.

Which begs the question: What can’t he do?

If he has proven he can catch, block and make defenders miss, there’s nothing left to prove.