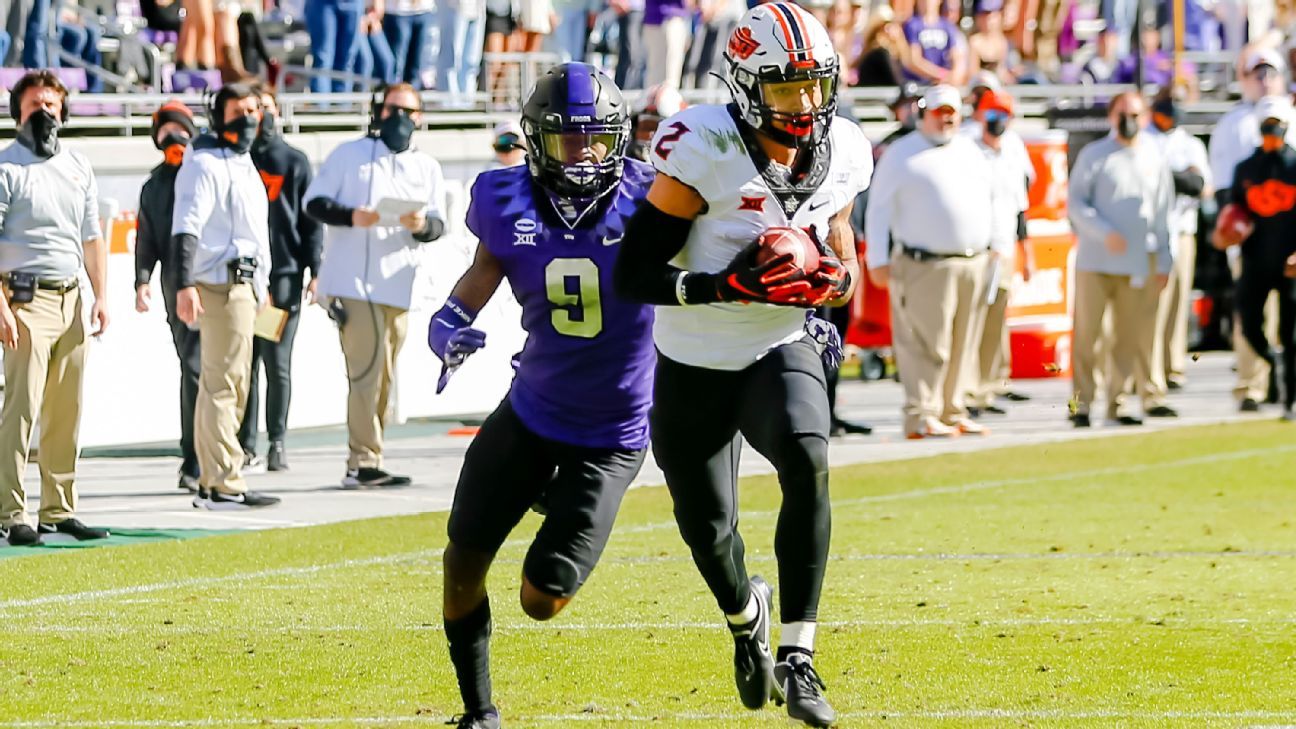 Oklahoma State senior wide receiver Tylan Wallace did not play in the second half of Tuesday’s 37-34 Cheez-It Bowl victory over Miami because the coaching staff wanted to protect their star receiver.

Wallace, a Biletnikoff Award finalist in 2018, caught six passes for 45 yards in the first half in Orlando, Florida. He’s expected to be a 2021 NFL draft prospect.

Cowboys coach Mike Gundy and offensive coordinator Kasey Dunn both said that Wallace’s limited game action was preplanned in order to protect him from potential injury and to allow some of the team’s younger receivers to see meaningful playing time.

“Obviously, he has a future that very, very few people have an opportunity for, so myself and Coach Dunn were very protective of him,” Gundy said. “And we made the choice at that time to let some other players get in and compete, so we just didn’t have to hold our breath in that situation.”

Dunn said he told other offensive players about the plan prior to the game.

“I told the guys over at the hotel before the game started that I want to get some younger guys in the second half,” Dunn said. “I want to protect [Wallace] for sure. … So that’s 100 percent on me as far as who played and when.”

Wallace has been Oklahoma State’s leading receiver each of the past three seasons. He caught 59 passes for 922 yards and six touchdowns this season. In 2019, he caught 53 passes for 903 yards and eight touchdowns in just eight games before his season was cut short by an ACL injury his knee. He considered entering the 2020 NFL draft but ultimately decided to return for his senior season.

Prior to the Cheez-It Bowl, Wallace told reporters that he felt it was important to play in the bowl game to finish out his season and career.

“I think to me, playing in the bowl game for me is the right way to go out,” Wallace said Sunday. “I feel like I’ve put a lot into the program and it means a lot to me and I know it means a lot to the guys. I wanted to go ahead and finish out the right way in my eyes, to finish out the bowl game with them and spend the last however — the last game, last few moments and everything with them.”

Gundy said Tuesday there was no specific time determined that the coaches were planning to pull Wallace from the game, but they agreed to do it at some point. Seeing the injury Miami quarterback D’Eriq King suffered in the second quarter might have influenced the timing, Gundy said.

“There’s always the chance in the back of your mind that [an injury] happens,” Gundy said. “I’m not so sure that what took place with Miami’s quarterback didn’t have a little bit of an effect on this.”

Quarterback Spencer Sanders said after Tuesday’s victory that he would take issue with anyone who would criticize Wallace for not playing in the second half.

“That’s fine, what he did, I mean, he’s done plenty for us,” said Sanders, the game’s MVP for the No. 21 Cowboys (8-3). “I really wish I would hear somebody try to down him or call him a quitter, because they’ve got to deal with me. That’s unacceptable. I don’t think that’s OK. If anybody wants to call him a quitter, you just don’t know football. I told him, ‘I wish you the best.’ He did what he had to do.”

Wallace said the decision whether to participate in bowl games is a “personal decision” that he respects, regardless of the choice teammates or others make.

“Guys make their own personal decisions. I think that’s them. It’s their life. It’s however they want to live it,” Wallace said Sunday. “So if they want to opt out, then I think that’s great for them. Everybody has different situations. So you know, I think I see it easily either way or the other.

“I definitely praise guys, if they opt out, if they want to do their own thing, they have their own reasons for doing so and also guys that finish out the season, I think either way it goes, I praise either way.”