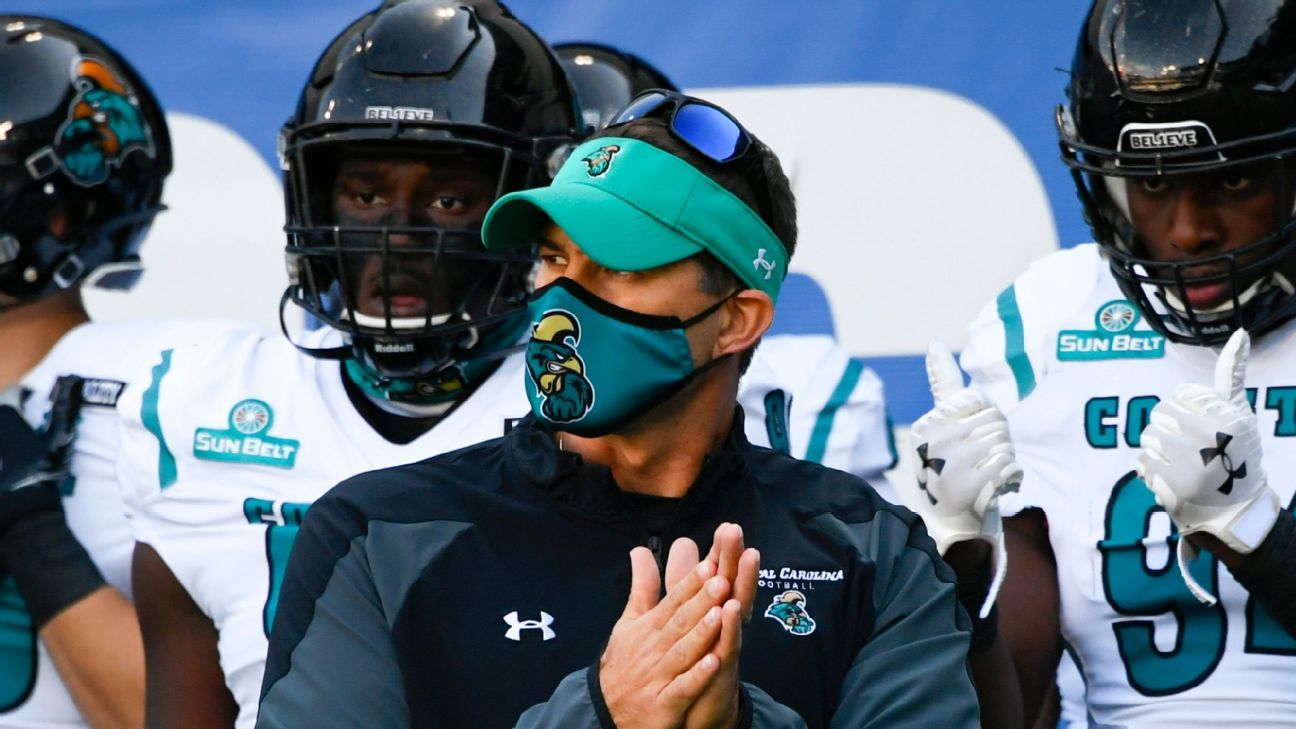 Coastal Carolina’s Jamey Chadwell is The Associated Press college football Coach of the Year after leading the Chanticleers to a surprising, near-perfect season.

Chadwell is the first Sun Belt Conference coach to win the AP award, which was established in 1988, and the third coach to earn it with a team from outside the Power Five leagues. UCF’s Scott Frost was AP Coach of the Year in 2017 and Gary Patterson won the first of his two AP awards with TCU in 2009 when the Horned Frogs were competing in the Mountain West.

The 43-year-old Chadwell directed a breakout season for No. 9 Coastal Carolina (11-1) in his third year leading the program.

The Chanticleers were picked last in the Sun Belt’s East Division after finishing 5-7 (2-6) last year.

Instead, behind freshman quarterback Grayson McCall running a creative option offense, Coastal Carolina had its best season since transitioning to the Bowl Subdivision in 2017.

The Chanticleers made the Sun Belt championship game, though they did not get to play in it because of COVID-19 issues within the program. But they finished with a perfect regular season that included victories over Sun Belt West winner Louisiana-Lafayette and three-time conference champion Appalachian State.

McCall was injured during the victory against Louisiana-Lafayette and didn’t play the following week. When the Chanticleers still beat Georgia Southern the next week without McCall, Chadwell knew he had something special.

“Nobody panicked,” Chadwell said. “We started getting all kinds of national attention after that Louisiana game and I started worrying that’s going to go to our head, and it didn’t. And after that game when we found a way to win it, I thought we’re going to be tough to beat from here on out.”

Coastal Carolina also beat BYU in one of the best games of this strange season. After a virus outbreak forced Liberty to pull out of a nonconference game scheduled for Dec. 5 in Conway, South Carolina, the Cougars and Chants agreed to play on short notice.

Coastal won a 22-17 thriller, stopping BYU on the final play a yard short of the goal line and a winning touchdown.

“This has been the best senior leadership class I have ever been around,” Chadwell said.

The Chants’ perfect season came to an end last week when they lost in overtime to Liberty in the Cure Bowl.

Chadwell came to Coastal Carolina in 2017 as offensive coordinator for former coach Joe Moglia after four successful seasons at FCS Charleston Southern. Instead of being offensive coordinator, Chadwell served as interim head coach at Coastal in his first season when Moglia needed to sit out for health reasons.

“That was the worst professional year of my life. It was so challenging,” Chadwell said. “It was basically being a substitute teacher when everybody knew the teacher was coming back.”

Moglia returned for one season in 2018 and then retired, handing it off to Chadwell, who quickly brought the program to new heights.

“I never doubted that it would work. I felt strongly about what we were doing,” Chadwell said. “I think this year was maybe the first time it was truly my team.”

And it turned out to be the best team in school history.

“Everybody wants 2020 to end. I kept telling my wife I hope it gets to Dec. 31 and we just keep running it over because it’s been unbelievable,” Chadwell said.

Pat Cummins: There are no cowards in the Australian team
Titans’ Ryan Tannehill doesn’t see Bengals matchup as a revenge game from playoff loss
Buccaneers rule out RB Fournette vs. Browns
Week 12 inactives: Who’s in and who’s out?
Follow live: Hurts, Eagles look to get back on track