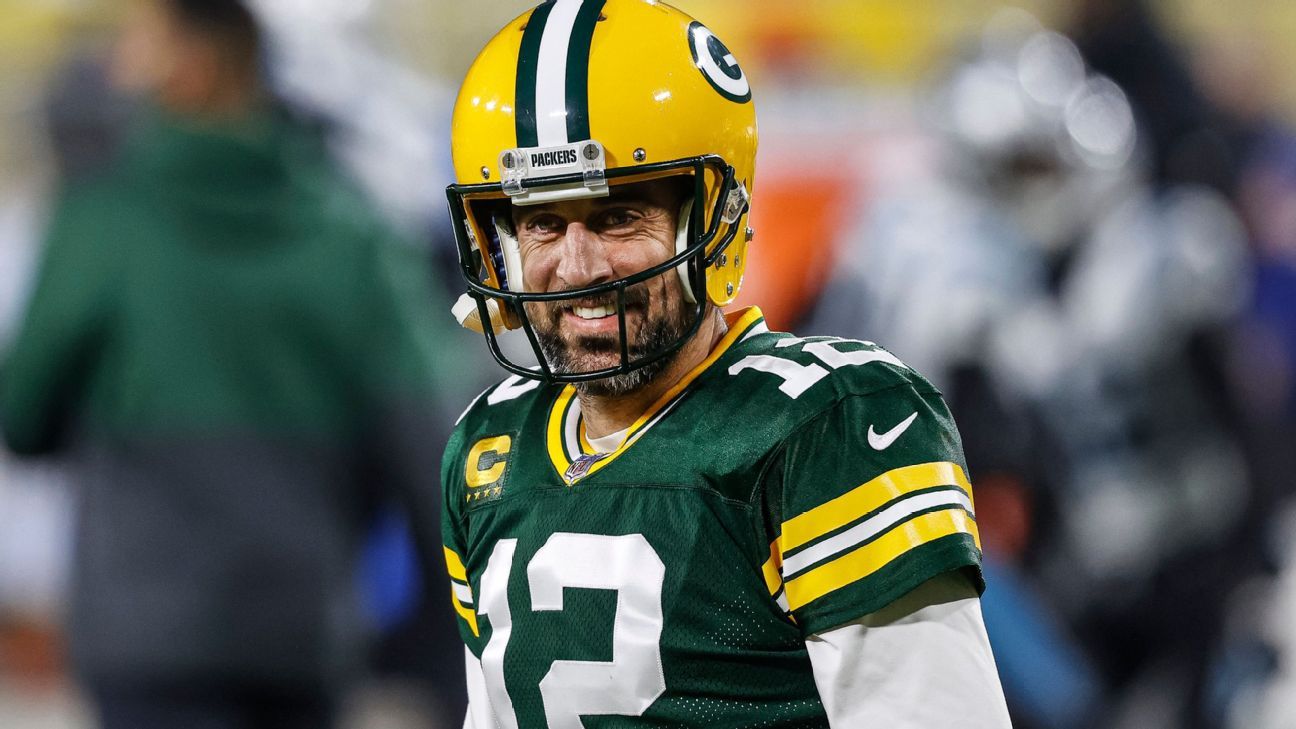 It’s fitting that in a year where several NFL teams’ playoff fates will be decided in the final game of season, the MVP race is culminating in thrilling fashion with late-year heroics that may ultimately define who walks away with the prestigious award.

And entering Week 17, there’s a new favorite to win the MVP. Our panel of nine analysts voted on the top 10 players in the MVP race thus far, and we then used those nine sets of rankings to determine our top five candidates overall, using Heisman Trophy-esque scaling for each ranking. Based on voting in this final round, we agree with the general consensus around the league that it’s a toss-up between Aaron Rodgers and Patrick Mahomes. But six of our nine panelists put the Packers’ quarterback in the No. 1 spot.

The 2020 MVP will likely be decided between two of the league’s best quarterbacks, but there are a handful of others who made a compelling case. Here’s a look at our final MVP watch rankings.

Rodgers went from being put on notice after the Packers drafted Jordan Love in April to being the MVP front-runner eight months later. The Green Bay quarterback has been on a tear since Week 12, throwing at least three touchdowns in four of the Packers’ last five wins. Rodgers is now on his way to capturing his third MVP award after a dominant prime-time performance against Tennessee on Sunday, where he earned his season-defining win (four touchdowns). It was also his 13th game this season with a 100-plus passer rating, which is tied for the most games in a single season in the Super bowl era, an achievement he also accomplished the first time he was named the league’s most valuable player in 2011.

Rodgers has made more happen with fewer weapons around him, all while leading the league in touchdown passes (44) and passer rating (119.4), ranking second in completion percentage (70.3%) and sitting at fifth in passing yards. With one more win against Chicago in Week 17, the Packers will lock up the NFC’s top seed and a first-round bye. If Rodgers hasn’t cemented himself as the MVP already, helping the Packers accomplish that feat will be what does it.

While Mahomes may be the most valuable player to the league at large and the face of the NFL, Rodgers is the most critical part of his team’s success. That’s why he finishes this season as the probable MVP.

While Mahomes has been terrific in quarterbacking the Chiefs to a 14-1 record, there aren’t too many categories where the reigning Super Bowl champ has Rodgers beat. Simply put, the Packers quarterback has outplayed Mahomes down the stretch, and a down week for the Chiefs’ QB against the Falcons coupled with the fact that Rodgers exploded on Sunday Night Football may be the nail in the coffin. Mahomes’ three interceptions against Miami in Week 14 don’t help his case, either. Neither does his career-low 5.4 yards per attempt vs. the Saints.

The Kansas City QB would need to dominate in the Chiefs’ regular-season finale against the Chargers to possibly win back the top spot, but it looks like coach Andy Reid is leaning toward getting his starters some rest before eyeing a repeat run at a title next month. Of course, none of this is to say the 25-year-old isn’t tremendous, awesome or whatever other adjective one could use to describe his play in 2020. Mahomes leads the NFL in passing yards and has routinely pulled off wild, head-scratching, miracle plays that leave the rest of the league in awe of his talents. Rodgers has just been a bit better this season.

No quarterback has seen a larger increase in Total QBR from 2019 (49.4) to 2020 (81.6) than Allen, according to ESPN Stats & Information. It has helped the Bills establish supremacy in the AFC East with their first division title since 1995 and first season sweep of the Patriots in 20 years.

Allen is likely too far behind Rodgers and Mahomes to win the MVP, but he’s no less deserving of being in the conversation after his remarkable turnaround, completing 68% of his passes for more than 4,000 yards and helping Buffalo earn its most single-season victories since 1993. Allen put an exclamation point on his terrific 2020 by throwing for 320 yards and four touchdowns in a prime-time win over the Patriots, which earned him his eighth 300-yard passing game of the season. His 34 passing touchdowns also set a new single-season franchise record.

Henry is closing in on his second straight rushing title and is 223 yards away from becoming the eighth player to join the prestigious 2,000-yard rushing club. He averaged 5.9 yards per carry in the month of December, tied for the most in NFL history among players with at least 300 rushing attempts. And what’s perhaps most impressive is that in spite of his workload, Henry has fumbled only once this season.

The Titans are 10-5 with a chance to lock up the AFC South and a playoff bid because of the command Henry has taken in just about every game he has played in 2020. He has at least 75 rushing yards in 12 of his 15 games, and he has just once rushed for fewer than 60.

Wilson didn’t exactly revert to his early-season MVP form to beat the Rams and capture the NFC West, but he didn’t let Aaron Donald wreck the Seahawks’ game plan and has played well enough down the stretch to stay in the conversation. Seattle’s defense has put Wilson in some difficult situations, where he has needed to grind out late wins, and that should be taken into context when evaluating the load he has been asked to carry in 2020. What hurts his candidacy most, though, are his 13 interceptions, tied for the third-most in the NFL.

Aaron Donald, DT, Los Angeles Rams: Donald did his best to keep Wilson uncomfortable in Week 16, notching eight pressures and a sack. His 13.5 sacks rank second to T.J. Watt (15), the only player who may be standing in the way of Donald’s third Defensive Player of the Year award since 2017. Donald is one of the best defenders in the league and the anchor of a Rams defense that ranks top-three in efficiency.

Alvin Kamara, RB, New Orleans Saints: Henry gets all the love, but don’t forget about the season Kamara has put together, with 1,688 yards from scrimmage (third-most) and 21 total TDs (six more than the Titans’ MVP candidate). Without three of their top four receivers, the Saints ran everything through Kamara in a Christmas Day win, and, boy, did he deliver. Kamara rushed for six TDs against Minnesota, tying the NFL single-game record. And in the process, he set New Orleans’ franchise record for touchdowns in a season.

Tom Brady, QB, Tampa Bay Buccaneers: Currently carrying 150-1 odds to win MVP, Brady has already delivered on one of the lofty expectations set before him when he signed with Tampa Bay in March. For the first time since 2007, the Bucs are playoff bound after Brady threw four touchdowns and set a career-high 348 first-half passing yards in a rout of the Lions. After hitting a wall in November, and questions were raised about the viability of the Bucs’ offense in the postseason, Brady righted the ship and will have his team playing in January.

Travis Kelce, TE, Kansas City Chiefs: In helping Kansas City lock up the No. 1 seed in the AFC playoffs in Week 16, Kelce caught seven passes for 98 yards. He’s the first tight end to have two 100-catch seasons, and he set the single-season yardage record for a tight end with 1,467 through 15 games.

Kyler Murray, QB, Arizona Cardinals: The Cardinals are in an offensive slump with their season on the line and may miss the playoffs if Murray (leg injury) isn’t able to go in Week 17. He will likely come up short of becoming the first player to throw for 4,000 yards and rush for 1,000, but his impact on Arizona’s success — especially with his feet — has been felt all throughout 2020. The Cardinals are 0-5 when Murray rushes seven or fewer times in a game and 8-2 when he runs eight or more times.

These players received at least one top-10 vote from our nine experts. Keep in mind that in most cases those votes came outside the top five.

Luka after Bucks roll Mavs: Giannis ‘best in NBA’
The Hypnotoad, a Mercedes and those postgame videos: 12 stories to explain TCU’s 12-0 season
Pacheco hands Harrison first loss in PFL stunner
Bolts’ Staley on 2-point call: ‘Living week to week’
Everything you need to know about the 2023 NBA All-Star Game