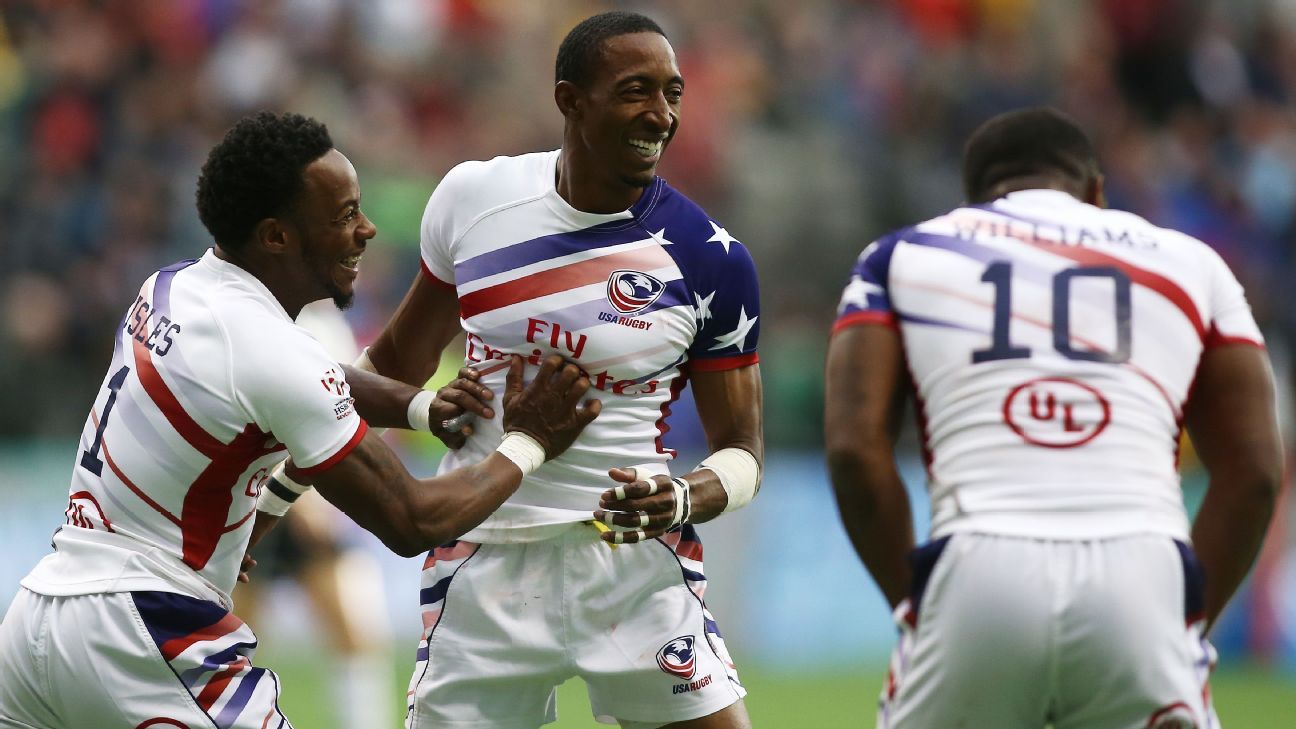 Perry Baker and Carlin Isles, two of the fastest players rugby has ever seen, are in a race to achieve two significant personal milestones as the USA Sevens prepare to host a key leg of the HSBC World Rugby Sevens Series in Los Angeles this weekend.

Both men stand on 199 career tries and 997 points in the Series, and USA head coach Mike Friday faces a difficult selection conundrum with Isles and Baker, two of the most competitive “dawgs” in a squad that is starting to find its form in the build up to the 2020 Olympic Games in Japan.

“It is fantastic for Perry and Carlin to be on the verge of 200 tries and 1,000 points,” Friday says. “I am open to all gifts from Carlin and Perry about who starts the first pool game against Samoa.

“We look at them as one player — one starts a game and then the other finishes — although Perry did some work at centre in Sydney. I am not sure how we will start against Samoa and all I hope is that they both achieve 100 tries and 1,000 points in front of their home crowd and they are both so competitive with each other.

“It is brilliant to have these two fantastic players in our armoury and they are more than just speedsters. When you look at their all-round rugby game they are now seen as just rugby players not crossovers or athletes.

“They are exceptionally fast rugby players that we refer to either as tweedle-dee and tweedle-dum, the Chuckle Brothers or the race horses depending on what they have done. They are constantly working to get even better and defences are setting up to stop Perry and Carlin from scoring on the outside so they have to continually evolve to break down defences which is something they have learnt.”

The chance to win gold in Tokyo is driving every major nation, and Friday recognises the dramatic change in status that could be achieved by the sport in the USA if they can give American sports fan an Olympic rugby triumph.

The loss of the Sevens series tournaments in Hong Kong and Singapore due to the coronavirus has changed every nation’s build up to the Olympic Games Sevens, reducing the pre-Tokyo competitions from six to four, making it vital for teams to maximise their opportunities.

USA Eagles’ third place finish in Sydney last weekend — where Fiji took the title — displayed how the side are starting to hit top gear, and now they have the chance to signal the arrival of Los Angeles as a new venue with a third successive title on home soil after two Las Vegas triumphs.

USA held the No. 1 ranking for much of last season before finishing second to Fiji, the reigning Olympic champions.

The USA squad’s build up to the Olympic Games has been changed following the decision to move the Hong Kong and Singapore legs and Friday is aiming to fill in the gaps in the schedule with training and a four team tourament.

“The loss of Hong Kong and Singapore means that post-Vancouver we will then go into a heavy pre-season training period for four weeks to lead into London and Paris and then onto the Olympics,” Friday says.

“We will also arrange a tournament with Canada and Argentina to create matches during that training period. Everyone is working on the basis that the Olympics goes ahead and remember we had concerns in 2006 in Rio about Zika.”

Tokyo is still in the distance, and Friday’s focus is on the Los Angeles Sevens where another home triumph will hopefully boost the game’s profile which is being helped by the arrival of big names stars such as Springbok Tendai “Beast” Matawarira, France’s Mathieu Bastareaud and All Black Ma’a Nonu in Major League Rugby, the fledgling professional 15s competition.

Despite those well known stars, it is Sevens that is leading the way in America and the switch to Los Angeles is seen as an important step.

“It is going to be a different experience in Los Angeles and Las Vegas was unique, a real party atmosphere with a lot of distractions as well,” Friday says.

“I am sure Los Angeles can bring a different vibe.We knew that we would not start as well as we could have this season because of the agreement to release some of our most experienced players to take part in the 2019 Rugby World Cup in Japan. In America, Sevens is the top dog and 15s is secondary at the moment, and while that may change in the years to come, that is how it is.

“We also had long-term injuries which presented an opportunity for the younger players to step up but with youth and inexperience comes mistakes, and the sevens circuit is ruthless and unforgiving. We made some silly mistakes in this year’s series and paid the price losing games we should not have won. We are now moving in the right direction.”

Friday, like every other national sevens coach, has been forced to deal with shortened tournaments in Hamilton and Sydney which saw the quarterfinal rounds ditched to deliver a more streamlined product. It did not go down well.

Friday does not want to see it repeated although he recognises progress has to be made to continue to grow the Series.

“It doesn’t work and we are hoping common sense is restored post the Tokyo Olympics,” he says. “All 16 teams are not happy and we are trusting that World Rugby understands that the tournament has to be about teams being able to develop and get better.

“Getting rid of quarterfinals and trophy tournaments that allow the lesser nations to develop and become super powers needs to be sorted out.

“Let’s remember that five years ago the USA was fighting relegation in sevens and we needed those bottom eight trophies to move forward and it was the same for Spain last year.

“I liken it to Formula One where some people like to watch the first and last laps of a grand prix but the petrol heads like to watch all 80 laps and we do need to cater for everyone, players, spectators, sponsors and broadcasters.”