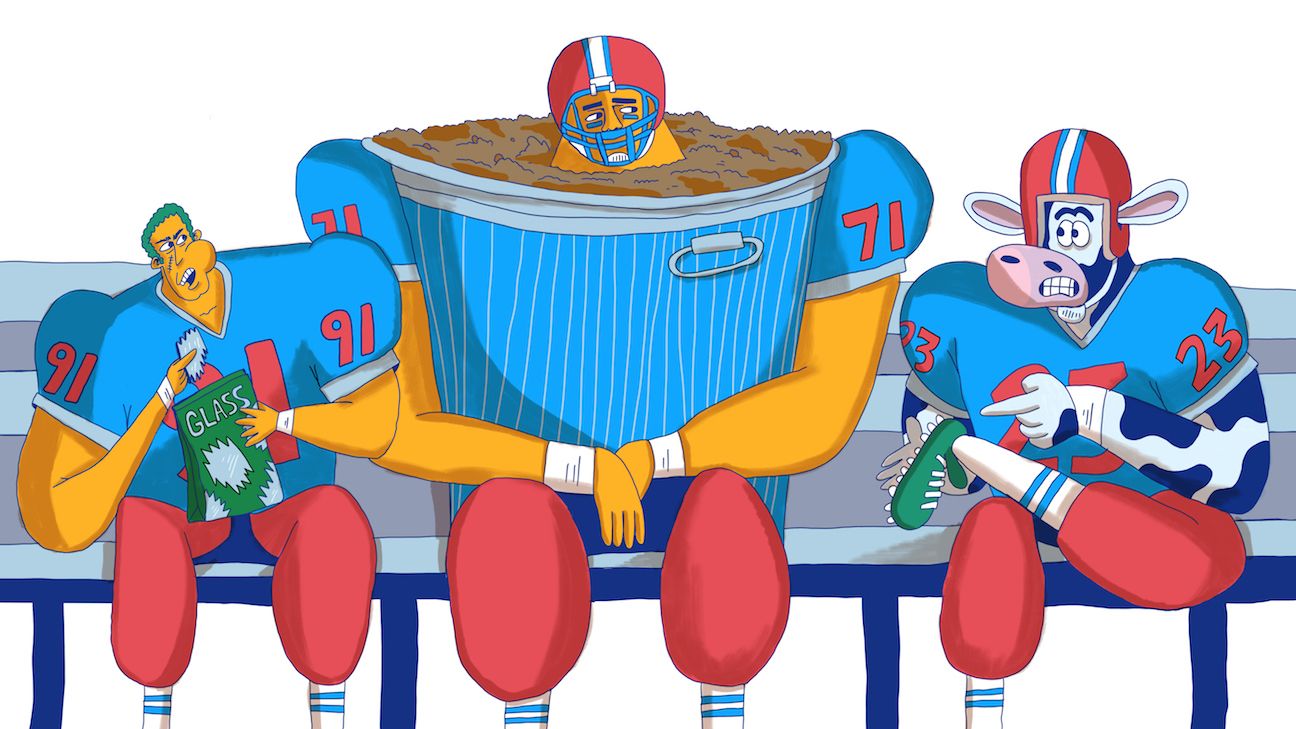 From surgeons to pilots to carpenters, mechanics and baristas, every profession has its own language. For the next 22 days, the lingo of the NFL draft will be all over the airwaves as analysts, scouts and fans define the difference between Greedy Williams and Quinnen Williams.

For those doing the drafting and scouting, the lingo is useful.

“It’s because you look at all these [NFL draft prospects] over and over again and you’re trying grade them, stack them, separate one from the other,” former Titans general manager Floyd Reese said. “The best guys at doing it can describe what they mean, why one guy is different or why they remind them of somebody else. You hear it all and then you know right then exactly what they mean.”

The Basics | Obscenity-based | The Secret Menu

Some are well-worn classics; some are so unique only one native speaker is still using them. In preparation for the draft, here’s the ESPN Abridged Draft Glossary.

Alligator arms (n., al’i-ga’ter arms): From the American alligator (Alligatoridae mississippiensis), which has an average size of 13 feet and 790 pounds. Because of their short legs, these reptiles’ bodies barely move above the ground. In the NFL, the term refers to a specimen who won’t extend his arms for a catch for fear of injury. The less common but still funny synonym: T-rex arms.

See also: someone who won’t reach for the check

Bend and burst (adj., bend and burst): The bend is what a pass-rusher does when turning the corner on an offensive lineman. The burst is the speed to close the deal. It combines a rusher’s flexibility and leverage with speed.

Body catcher (n., bod e kach ‘er): Holden Caulfield heard a song “if a body catch a body …” so maybe that’s where draft analysts got this term for a receiver who pins the ball against his body instead of catching with his hands. Then again, Holden got the song wrong.

Bubble (n., bub el): The rear, derriere, can, rump, etc. Likely shortened from bubble butt or its derivatives, especially for big guys who move with power. The term “bubble” is used, according to scouts, so scouts and executives can avoid saying “ass” a lot in meetings.

Catch tackler (n., kech tack’ler): A defender whose tackling strategy is to let a ball carrier run into him and hope he falls.

Click and close (adj., klik en klos): From the Dutch for click. The ability to go backward, then forward quickly. An essential skill for defensive backs spending their professional careers doing this cha-cha in cleats.

Cow on ice (n., kow on is): Picture a cow. Now put that cow on ice and make it move. Hilarious. It’s a player with no balance who spends a lot of time falling and getting up.

Downhill runner (n., down hil run ‘er): Almost exclusively used for running backs. A ball carrier who can power through tackles while almost falling forward and also having the speed to score.

Fluid hips (adj., floo id hips): Every human has hips with fluid. That’s just anatomy. But some players have more to go around. These liquidy joints allow them to change directions quickly. 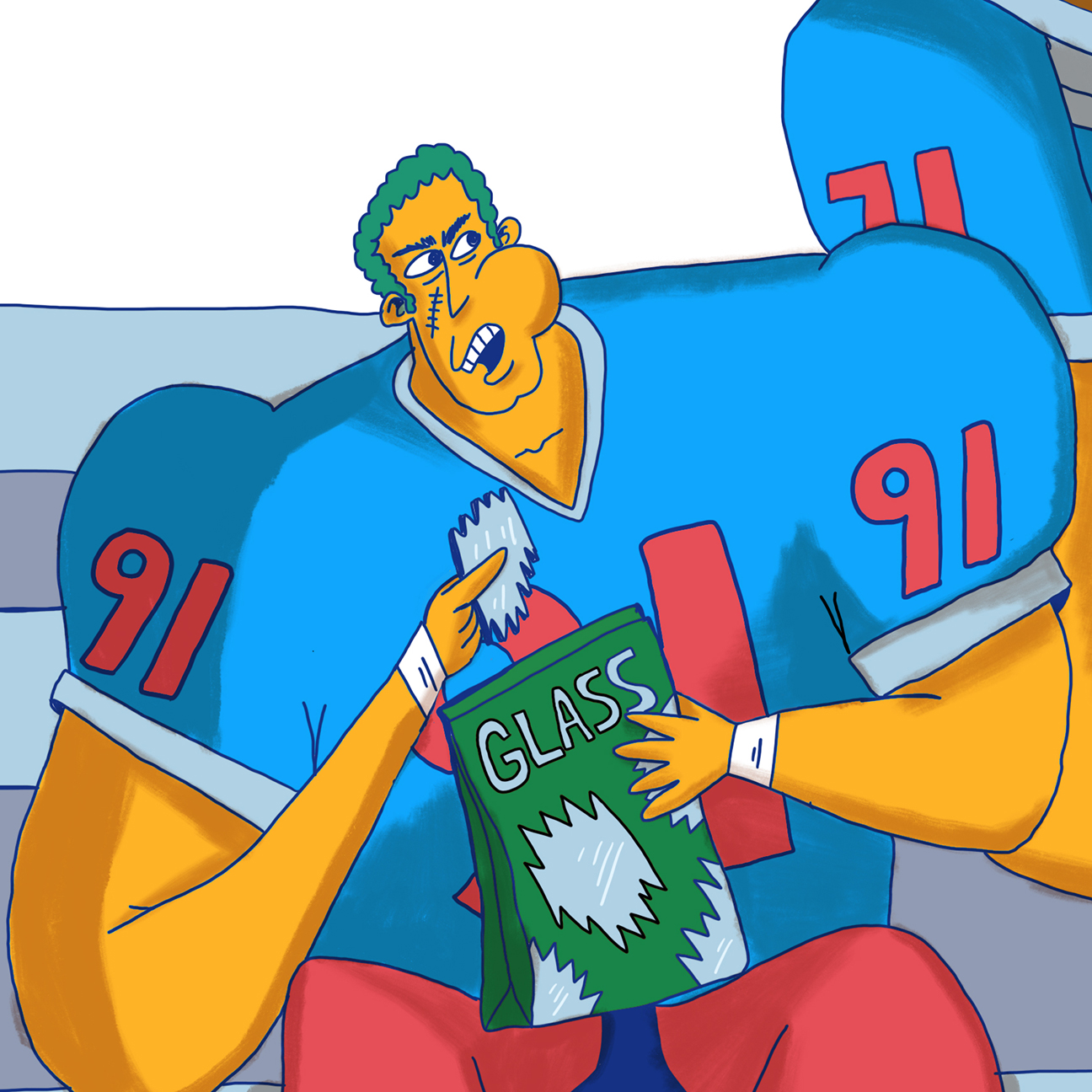 Glass-eater (n., glas eder): A bad dude. The rest of us might just be avocado toast eaters, or avocado ice cream eaters in Tom Brady’s case, but these guys literally eat glass to get ready for NFL games and that makes them extra, extra tough. Usually reserved for offensive linemen.

Go-home gear (n., go-hom gir): The fastest possible speed. The ball carrier whose speed immediately separates him once he has the ball.

Hands catcher (n., hand kech ‘er): Self-explanatory. Reserved for receivers. It’s a player who, according to draftniks, “snatches” the pass with his hands.

J.A.G. (n., jag): In a world searching for exceptional people, this ain’t you. Only a handful of prospects in any NFL draft will be among football’s 1 percenters. You might be nice. A pillar of the community. Maybe even a contributor to an NFL team. But when measured against draft elites, you have been deemed Just A Guy.

Violent hands (adj., v., vi-elent hands): From the Latin violentus. Not just normal hands, but just like it sounds, it’s a player whose hands are powerful enough to move people where he wants with the initial impact.

Waist bender (n., wast ben’der): Again, anatomy. Every football players bends at the waist and the knees. However, from a physics standpoint, football values the bending of the latter more than the former. Ideally, for better leverage, a player in a stance should keep a flat back and bend at his knees. It allows for more power and balance. It’s physics plus football; it can’t be argued with.

“Holy s—” tackler: Like the many famous cases before the Supreme Court defining subjective obscenity by visual evidence: You know it when you see it.

L.I.A.: You know the bubble. This is the opposite. Often, this refers to a thin-waisted lineman who needs more lower-body strength. This is scout shorthand for “light in the ass.”

See also: Needs some sand in his pants

Couldn’t even use a crosswalk: When you’re watching a game and there’s that defender pacing around, that’s it. This describes a defender who repeatedly, as in all the time, has trouble getting lined up before the play.

Thinks he’s a soloist, but he can’t sing: The misplaced-confidence guy. He is a star and a leader in his mind only.

Trash can full of dirt: From the Latin lutum for dirt. Out of use in some dialects, this refers to, usually, defensive linemen who are hard to move out of the way.

Washcloth tackler: Visualize throwing a wet washcloth against something only to watch it stick briefly and then fall off. This is the guy who ends up sliding off the runners on all the big plays.

No drama here: Dak will still be QB1, coach says
What are Ronaldo’s options? Man United forward has big call to make on his future
Munster’s Farrell to step away due to court case
NFL ends Pro Bowl, turns to skills competition
Safety Burns (neck) sits out LSU’s 38-0 victory