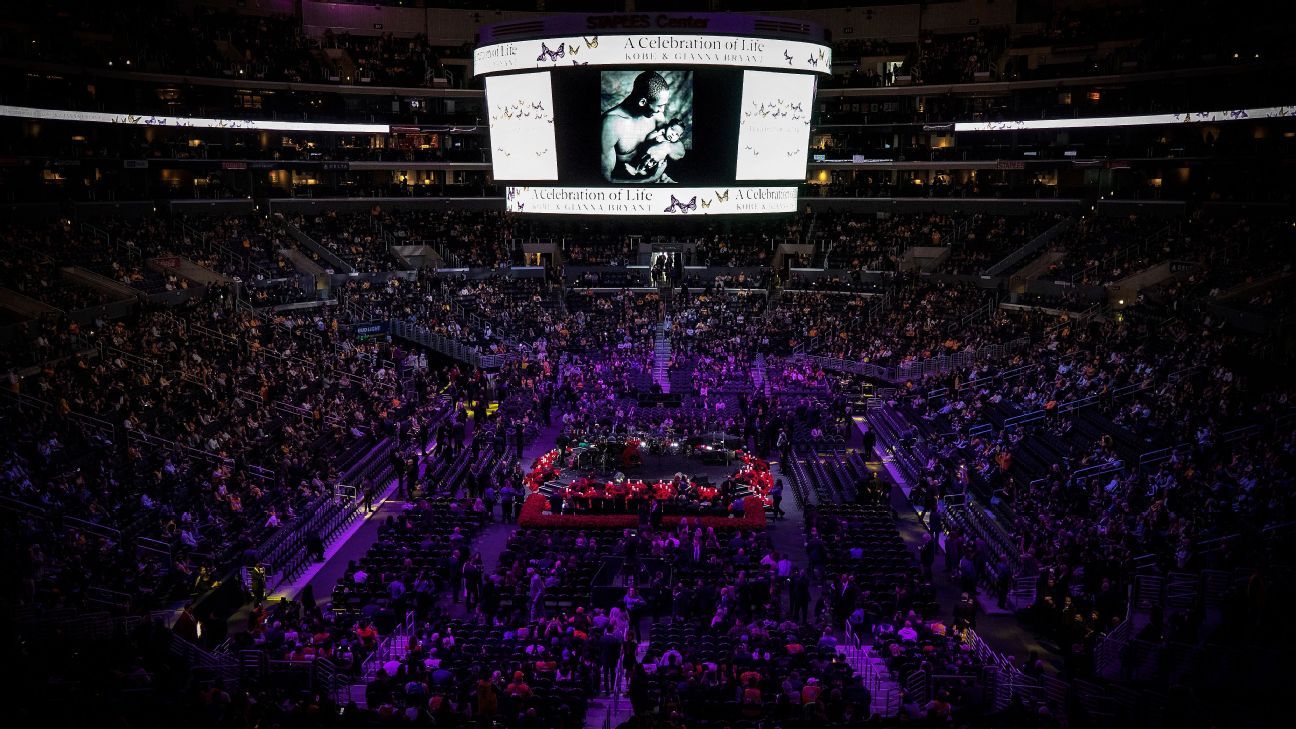 LOS ANGELES — In the 6 a.m. hour, a line begins snaking down Olympic Blvd.

“It’s going to be a crazy day, bro,” one security guard says to another as people flood the plaza outside Staples Center. Peddlers hawk memorabilia on nearby corners. City bus signages blink, “RIP KOBE.”

In the seven days after the crash, as many as 350,000 people passed through this plaza, leaving behind tens of thousands of flowers, more than 25,000 candles, 1,353 basketballs, more than 1,000 jerseys, hats and T-shirts, more than 500 personalized notes and more than 350 pairs of shoes.

But for now, the space is clear, save for barricades to silo a swelling crowd of nearly 20,000 waiting to fill Staples Center. Nearby, large LED screens read, “A Celebration of Life — Kobe & Gianna Bryant,” their names surrounded by 24 purple and gold butterflies.

“All right, let’s have a good time today,” a security guard tells the crowd soon before the arena doors open near the Star Plaza, where statues of several Lakers greats currently stand. Bryant had been involved in talks about his own statue and even potential poses, but no decisions had been made. And as discussions accelerate, those decisions will now fall to his family.

Inside the arena, a 24-foot-by-24-foot stage stands at center court, framed by 33,643 red roses, one for every point Bryant scored during his 20-season career with the Los Angeles Lakers, a source says. Here is the intersection between the speakers, the crowd and an arena full of people consoling each other and celebrating Bryant, his 13-year-old daughter and seven others who died in a helicopter crash Jan. 26 in Calabasas, California.

WITH A BAND dressed in white behind her, Beyonce Knowles-Carter directly faces Vanessa Bryant, who sits in the front row of a small, separate section for the Bryant family. It is surrounded by roses.

“I’m here, because I love Kobe,” Beyonce tells the audience, “and [‘XO’] was one of his favorite songs. So I want to start that over. And I want us to do it all together.

“And I want you to do it so loud,” she adds, her gaze peering upward, “they hear your love.”

After Beyonce finishes “Halo,” she blows a kiss toward the heavens, places her hand over her heart, looks to Vanessa and mouths, “I love you.”

Soon after, Jimmy Kimmel, who is emceeing the memorial, asks the crowd for a favor.

“Since we are here today to celebrate,” he says, “I’d like to invite you right now to take a moment to say hello to the people around you, whether you know them or not — to be grateful for life and for the fact that we are all here together.”

All around the stage, NBA legends, Lakers staffers and others rise and turn to each other. There are handshakes and long, emotional embraces. The moment lasts for 20 long seconds.

EVERY DETAIL FOR the event itself had been approved by Vanessa and the Bryant family, a source says.

Just after 11 a.m. PT, Vanessa is introduced, and the crowd erupts, immediately rising to its feet. She has been widowed for 30 days, and she walks with a resolved stride toward the lectern.

She carries folded, white pages in one hand, wipes her hair from her face, unfolds her speech and scans the words that capture what she has lost. She clenches a tissue in her left hand as fans shout, “I love you!” Looking down from the rafters behind her, Bryant’s No. 24 and No. 8 retired jerseys shine in purple light. She surveys the crowd, her eyes welling, and she takes several deep, long breaths. She places both hands on the lectern and looks toward the crowd. She takes one more deep breath.

Vanessa Bryant says Gigi would have likely been the best player in the WNBA and praises Kobe as the MVP of girl dads.

“I AM THE White Mamba,” Diana Taurasi says.

A source close to the family says the most important thing to them was that the day focused not only on Kobe, but on Gianna — that she didn’t get lost in the mix. Vanessa opened by speaking about her daughter, and the next three speakers — Taurasi, Oregon star Sabrina Ionescu, UConn women’s basketball coach Geno Auriemma — were all from the sport Gianna loved and pursued.

As Taurasi continues her speech, her face clenches. She sniffles. The words are caught somewhere in her throat, and they will not move. She is teetering on that terrible edge, before the body completely surrenders to emotion. She shuffles left to right, back and forth, waging an internal battle for control.

After those long seconds pass, Taurasi finds the words about the last time she saw a young girl considered to be the future of women’s basketball, who aspired to play at Connecticut and dominate the WNBA.

“It was the look,” Taurasi says of Gianna, fighting tears, “of excitement, a look of belonging, a look of fierce determination.”

Keep it simple, Auriemma believes. Nothing much more than asking them to stay in front of the person with the ball. But Kobe, of course, wants to know more about rotations, nuances, complexities.

MINUTES AFTER THE ceremony ends, Shaquille O’Neal — who won three titles with Bryant, who warred with Bryant but then grew closer to him as they both aged –bounds out of his chair.

As attendees make their way toward the exits, O’Neal approaches Bryant’s father, Joe “Jellybean” Bryant, who rises from his chair. The two embrace in a long hug.

The tens of thousands of flowers that were left at L.A. Live in the days after Bryant died fill a blue shipping container and are in the process of being mulched and placed on plants and trees around L.A. Live in the coming weeks.

The same will happen to all the roses at Monday’s ceremony.