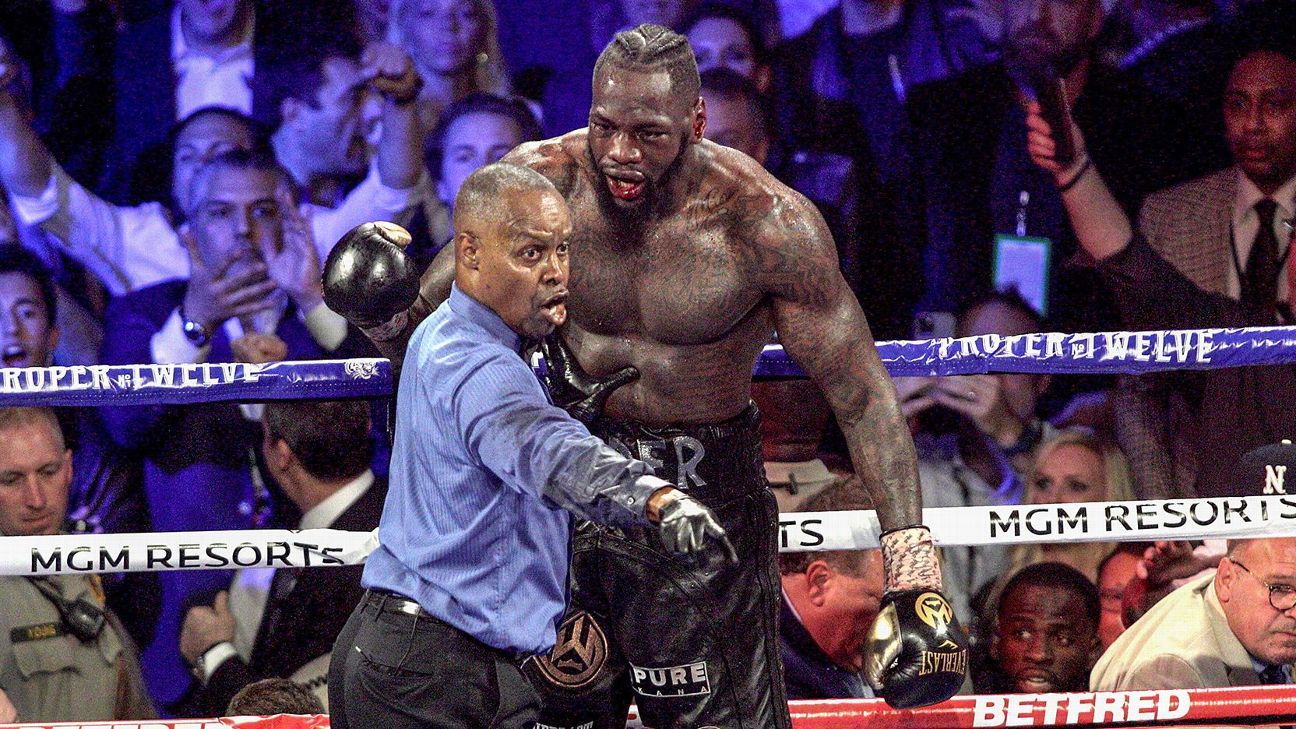 Tyson Fury defeated Deontay Wilder on Saturday night to claim the WBC heavyweight title and hand Wilder his first professional loss. As Fury landed at will with Wilder trapped in the corner, Mark Breland, one of Wilder’s trainers, threw in the towel, resulting in the fight being stopped.

Jay Deas, Wilder’s head cornerman, publicly questioned the decision at the postfight press conference, as did Wilder himself, in interviews with various media outlets on Monday.

“For Mark to do it, I was very heartbroken,” Wilder said to Dan Rafael. “If I say statements like I want to kill a man [in the ring], then I have to abide by those same principles in the ring of him doing the same thing to me. I’d rather die than go out with someone throwing the towel in.

Wilder also told ESPN that the outfit he wore to the ring was heavy and adversely affected his performance on Saturday night.

Was throwing the towel the right decision? ESPN polled other professional boxing trainers to get their take on the action of Wilder’s corner, as well as whether or not they believe Wilder’s wardrobe decision impacted his performance in the ring

Responses were edited for clarity.

Do you agree with Breland throwing in the towel?

Joe Goossen (Trainer of Rafael and Gabe Ruelas, Michael Nunn, Joel Casamayor, Diego Corrales, Sergey Lipinets and Chris Arreola): Without a doubt he did the right thing. Look, Deontay Wilder protested, which is the nature of fighters — they never want to quit. So I understand that, but the trainer is there to protect your life, as are the doctors, the referee and the commission. But the first line of defense is normally your corner, because they know what you’re capable of, or not capable of.

With the amount of fights Breland has been with Wilder, he knows what he’s looking at when it comes to his well-being. So I think it was absolutely the right call. I think it was all but over at that time. Breland initiated the process to the inspector, to the referee. He definitely overrode Deas, and what was going on was unbeknownst to Wilder as he was being attacked by Fury.

Wilder is not happy about it, and his statements since show how it has definitely interfered with that relationship.

Kevin Cunningham (Trainer of Cory Spinks, Devon Alexander, Erickson Lubin): I do agree. I thought he made the right decision. I thought Deontay Wilder’s legs looked weak from Round 1. And once he got tagged and hurt like that, I mean, he had a 6-foot-9, 273-pound man lining him up and teeing off on him.

I’m hearing people say that a fighter wants to go out on his shield. Well, that’s fine, that’s what a fighter’s mentality is supposed to be. But a good, experienced pro trainer is supposed to know when his fighter’s had enough and protect his fighter so he can regroup and come back another day. I thought Breland saw enough to know that it was not his fighter’s night and it was going to get worse, he wanted to save his guy from any permanent and further damage.

It’s a tough decision, but it’s a decision that you have to make when you’re in the trainer’s role. The head trainer is the leader of the team. When you’re a leader, you have to make leadership decisions, and that’s what I don’t understand with Jay Deas, the head trainer, going to the press [and] throwing Breland under the bus, saying that he doesn’t agree with Breland throwing in the towel.

For one, if I have an issue with anybody within the team, we discuss that behind closed doors. We don’t go to the press and tell the press and say, “I don’t agree with what he did,” and “He shouldn’t have did that,” and “My guy’s tough enough to go out on his shield.” Well, everybody’s guy is tough enough to go out on their shield, but what professional trainer really wants to see his fighter go out on his shield?

Andre Rozier (Trainer of Daniel Jacobs, Richard Commey, Sergiy Derevyanchenko and Edgar Berlanga): Absolutely he should have thrown in the towel. Deontay was bleeding from his ear and required stitches afterward. You don’t really see that in boxing, you see that in the MMA, guys are bashing their heads against the canvas and up against the cage. But you don’t see that in boxing. That’s problem No. 1.

Secondly, Deontay seemed to be disoriented after the second round, he didn’t have any coordination. From my perspective, it is not a good thing. As the bout wore on, it seemed to become even worse. I truly believe Mark did the absolute right thing, and whoever says he didn’t, they don’t know s— about boxing.

After the first round, Wilder was OK, but Fury was putting undaunted pressure on him. Of course it’s uncomfortable, and he doesn’t have great feet to begin with. If you have a big 6-foot-9, 273-pound monster coming at you, your not-so-good-feet aren’t going to be any better. But to let it just go on and have him suffer more damage, even though he said he wanted to go out on his shield — he was already on his shield.

Buddy McGirt (Trainer of Arturo Gatti, Antonio Tarver, Sergey Kovalev, Paulie Malignaggi and Janibek Alimkhanuly): Yes, he made the right decision. First of all, Deontay Wilder was not himself the other night. After the second round, he had nothing. You could see that. So, now here you are, as you’re slowing down, the other guy’s getting stronger. What chance do you have? Isn’t it best you live and fight another day, instead of getting your ass whooped and never fight again?

And on top of that, the trainer knows his fighter, You know when your fighter ain’t got it. He had nothing, his legs were gone, his equilibrium was f—ed after the knockdown, he was bleeding at the ear, every bomb he threw he missed.

Mark did the right thing. I texted Mark right after the fight and told him that. I wouldn’t have been mad if he threw in the towel after the fifth or sixth round.

How difficult is it to throw in the towel?

(Editor’s note: Buddy McGirt was the trainer for Maxim Dadashev during a fight in July 2019 in which Dadashev suffered brain injuries that resulted in his death four days later. McGirt stopped the fight after the 11th round. You can read more on his thoughts on that fight here.)

McGirt: It’s the toughest thing because it’s like… you really don’t have much time to think about it. But once it gets in your head — “Should I or shouldn’t I?” — then you’re watching the fight and it’s like, “F—.” But what comes from it is knowing your fighter, you say, “My guy has no chance in coming back in this fight, none. So why let him sit there and get beat more? Why?”

You can’t care about the emotions of your boxer, because if you did, you’d never stop a fight. Listen, I tell the fighters this: I’d rather you be mad at me for a month or two than, God forbid, your family being mad at me forever because something bad happened to you.

Goossen: First off, when you throw in the towel, it means you lost, OK? And everything you do going into a fight, it’s about winning. So whatever form, manner, or shape it takes, whether it’s a referee who stops it, your corner stops it, the judges award the other guy the fight, it’s all very hard to stomach. But stopping a fight is very difficult, especially when you still believe in your guy. Maybe he’s got something left to offer, but sometimes it comes to that.

It’s a tough thing to do, because sometimes you’re putting your own wishes ahead of what is the reality of the fight. You’ve got to come to grips with it. You want to win so badly sometimes, but for the betterment of the fighter, you’ve got to stop the fight.

Cunningham: For me, personally, it doesn’t matter whether or not the fighter wants to keep going, or if he has the mentality to go out on his shield and keep fighting. If he’s in a certain level of trouble, and I see that it’s just not his night, his legs are gone and there’s potential that some permanent damage could happen, I’m stopping the fight regardless of what my fighter’s mentality is. So it’s not that tough, to me.

Could Wilder’s walkout attire really have affected his legs?

Stephen A. says Deontay Wilder blaming his 40-pound costume for his loss to Tyson Fury is the most embarrassing excuse for a loss he’s ever heard.

SugarHill Steward (Trainer of Tyson Fury): I’ve heard a lot of crazy stuff — this doesn’t even rank up there, this is really nothing to me. But if that’s what they really believe is true, that’s what they believe is true. Everybody has their own truth, so you start thinking about it, hearing about it and you’ll start believing certain things. That’s the power of the mind, we know that.

Goossen: It’s really ironic and coincidental that one of the guys in the gym today said, “That outfit looked really heavy.” It definitely was part of the conversation, the outfit: the color of it, the flashing lights, then the weight of it, too.

How much did it really weigh? Wilder said 40 pounds, right? Then the next question is — how long did you have it on? What was the duration? Certainly it’s something that’s not conducive to having better legs, that’s for sure. I would probably, if I were in that locker room, nixed the idea of something that heavy on my fighter, for obvious reasons. So it could’ve played a part depending on how long exactly did he have that thing on.

If he had it on for like an hour, having 40 pounds on your shoulders, that’s a long time.

Cunningham: If you’re in training camp for eight, nine weeks, and your costume weakens your legs, you need to find a whole new training camp program. I have a hard time believing that the weight of a costume drains your legs to the point you have no legs coming into the ring. I mean, Deontay had no legs in the first round.

But if that’s what he says, I’m not going to go back-and-forth with what he’s saying and what not. It’s really a shame because the only person in that corner with world-class championship boxing experience is Breland — and he’s the fall guy. That’s what I have a problem with.

Rozier: Listen, it’s not that long of a ring walk. I have to say “no bueno” with that one. No, I don’t believe it had anything to do with the costume, and even if it were 100 pounds, you’re walking a few steps down and then you’re taking the top off it, so no, that in itself is an excuse. And I don’t go for that, at all.