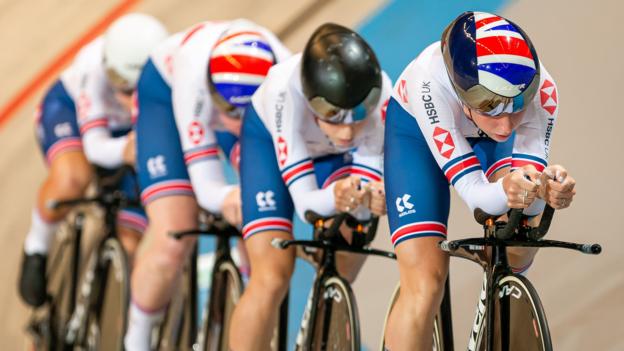 These are the most important and exciting World Championships in the four-year Olympic cycle. There is so much more riding on them than just rainbow jerseys because we’re really getting towards the sharp end.

The World Championships are a stepping stone to the Olympics, but it’s super exciting because this is the final selection event for all the teams. It’s getting really tight in certain events, and this is the last chance for riders to show what they have got leading into Tokyo.

The Great Britain team are the healthiest they have been in the past four years. In some ways it has worked really well in that they are the underdogs going into certain events, but in almost every single event we have a medal chance.

They won’t be at their very best but they’re definitely going to be the best we have seen since Rio 2016.

And I think the rest of the world will be nervous looking at GB even though they haven’t dominated over the past three or four years.

They’re like a sleeping giant. Are the GB team suddenly going to get back to where everybody expects them to be? Are we going to see some huge performances from some of the established stars? Will that shake the confidence of the guys from other nations who have been dominant?

The GB men’s endurance squad are looking good but the world has moved on and the standard has been raised.

Traditionally, it’s been seen as an Australia-GB head to head in the team pursuit, but now you’ve got maybe five or six different nations who are fighting it out for the gold medal. For the riders, it’s extremely tough, but the GB boys just need to focus on themselves and prove they are worthy of wearing that Olympic jersey.

I really hope three-time Olympic champion Ed Clancy makes the Tokyo team, and this is his last chance to cement his place. I would say he is the greatest team pursuit rider of all time.

I think they need him, but they will only pick him if he is absolutely on top form. There is no room for sentiment and he won’t be selected on his reputation.

It would be fantastic if Ed could produce a really good performance in Berlin. His experience and ability to shoulder pressure could be crucial in Tokyo.

Matt Walls has been exceptional over the past couple of years. He’s really earned his place in the squad, as has Ethan Hayter – they’re two exceptional riders.

Mark Stewart has performed incredibly well in the bunch races at the highest level. His ride at the Commonwealth Games to win gold in the points race was one of the best in the past four years of any British rider on the track. It was so gutsy. When he’s on form, he’s a match for anybody.

I think there will be two or three medals from the men’s endurance squad – but we’ll have to wait and see whether they get a gold.

Laura Kenny broke her shoulder in January and while she will race in Berlin you can’t underestimate how much a crash or an injury like that can affect your confidence and your preparation.

It will be a big setback, but I have no doubt that she can still physically get herself back to where she needs to be in time for Tokyo. However, she will have really wanted to lay down some big markers in Berlin to prove she is still the rider to beat.

It’s been an interesting progression between her and Katie Archibald over the past few years. Laura was the queen bee of the women’s endurance squad, but Katie has produced some incredible performances – so the big question is who does get that omnium place in Tokyo?

You’ve got Elinor Barker in the mix too, an incredibly successful world champion in her own right, so I think Laura will be frustrated. It is just really unfortunate but that is the nature of the sport.

Looking at the past three Olympic cycles, the women’s endurance squad have been your bankers for gold medals, but it’s getting tougher and other nations are raising their bar.

But it seems that GB have always got a little bit extra to give, no matter whether it’s the Americans, the Kiwis, the Aussies or whoever coming at them.

They will be the team to beat, and everybody who is in the squad and in the running will be trying to prove they are the ones to be picked for Tokyo.

Jason Kenny needs just one gold medal in Tokyo to become GB’s most successful Olympian, a title I share with him at the moment. But he won’t be feeling the pressure because I don’t think he’s motivated by these accolades. He’s motivated by medals, he wants to be the best he can and get the best results.

Jason is really starting to show some interesting form in the keirin – at the World Cup in Glasgow he was taking the race on from the front with confidence; he was making the big moves. I think he could be an outside chance to win a medal and he might surprise quite a few people.

We’ve always been on the back foot in the team sprint going into the past three or four Olympics, but traditionally we’ve been able to perform when it counts.

However, this time it is the biggest challenge the GB team have faced in recent times because the Dutch have been so strong.

Jason has previously said that Jack Carlin is the benchmark for the squad, and I would agree. Jack has shown that he can make world-level finals, and his silver medals in 2018 – at the World Championships and the Commonwealth Games – saw the rest of the world really start to take him seriously. This is a guy who can beat anybody on his day.

I think he was disappointed with his season last year. We were hoping to see his progression continue and it plateaued a little bit, but he has the potential. I’d love to see him get back to his very best and beyond.

It’s really interesting because since the team sprint ship has sailed in terms of qualification for Tokyo, it has really unleashed Katy Marchant.

Training for the team sprint wasn’t helping her in the individual sprint and the keirin, but now she can train in bigger gears and really focus on the strategies for being the best she can be in the individual events.

The confidence with which she performed in Glasgow made it one of the rides of the year. It was fantastic to see her take on that keirin final and win it. That really gave her confidence and the belief that she can be a genuine medal contender in Tokyo.

It will be interesting for the younger riders in the team sprint – Lauren Bate and Sophie Capewell – to get the chance to shine and establish themselves without any real pressure of qualification concerns.

It’s the first time in recent history where the medal chances are spread evenly across many nations – you just won’t get one country winning six or seven gold medals.

For the neutral observers, that’s a really good thing. It’s lovely when your home nation is dominating but to keep interest across the board and around the globe, it’s important that the smaller nations have a chance to win and can show you don’t have to have a massive set-up in order to be successful.

One of the stars of the championships could well be Lee Wai-sze of Hong Kong. She’s already a superstar but I think this will be a significant moment for her if she can continue her progression in Berlin and leading into Tokyo.

After the accident in which Kristina Vogel – the superstar of women’s sprinting – was paralysed, there was a massive void in world sprinting but Lee has filled that and really established herself as the person to beat.

It’s sad that we’ll never see that competition between her and Vogel but I think Lee is a new star and she’s definitely one to watch.