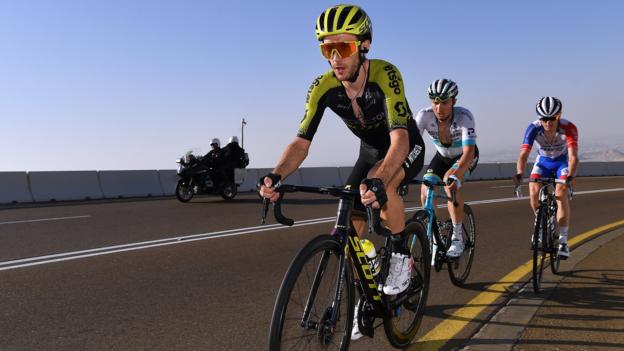 Britain’s Adam Yates leads the UAE Tour after a stunning attack to win stage three by the Mitchelton-Scott rider.

Yates claimed his first stage win outside Europe after breaking clear 6km from the top of Jebel Hafeet.

The 27-year-old shook off Alexey Lutsenko and David Gaudu around 5km from the summit to effectively win his first WorldTour stage since last April.

Britain’s Chris Froome was dropped at the foot of the climb and finished 10min 49sec behind Yates.

Slovenia’s Tadej Pogacar (UAE Team Emirates) overtook the chase group of Gaudu and Lutsenko but could not catch Yates, who collected the 10-second time bonus and finished 1:02 ahead.

“It is my first race of the season, so it was difficult for me to estimate where I stood compared to the competition,” said Yates.

“With today’s heat, it’s difficult to estimate – I think it was 37 to 38 degrees all day. I just wanted to test the legs to see where I am.

“That was perhaps a little too early [to attack], but I felt good. A few boys came along and behind me I could see that they organised themselves. I just went for it then.”

The 187km stage went from Al Qudra Cycle Track near Dubai through Abu Dhabi and up to Jebel Hafeet – one of the highest peaks in the UAE – near Al Ain.

The seven-stage race finishes on 29 February.

Wales Rugby to be externally reviewed – chief
Duke’s Whitehead (leg) out Saturday vs. G-Tech
LIV’s plea to subpoena Augusta members denied
Ex-player Ryans returns to Texans as head coach
‘You only fight him because you have to’: Why nobody wants to get into the ring with light heavyweight champion Artur Beterbiev