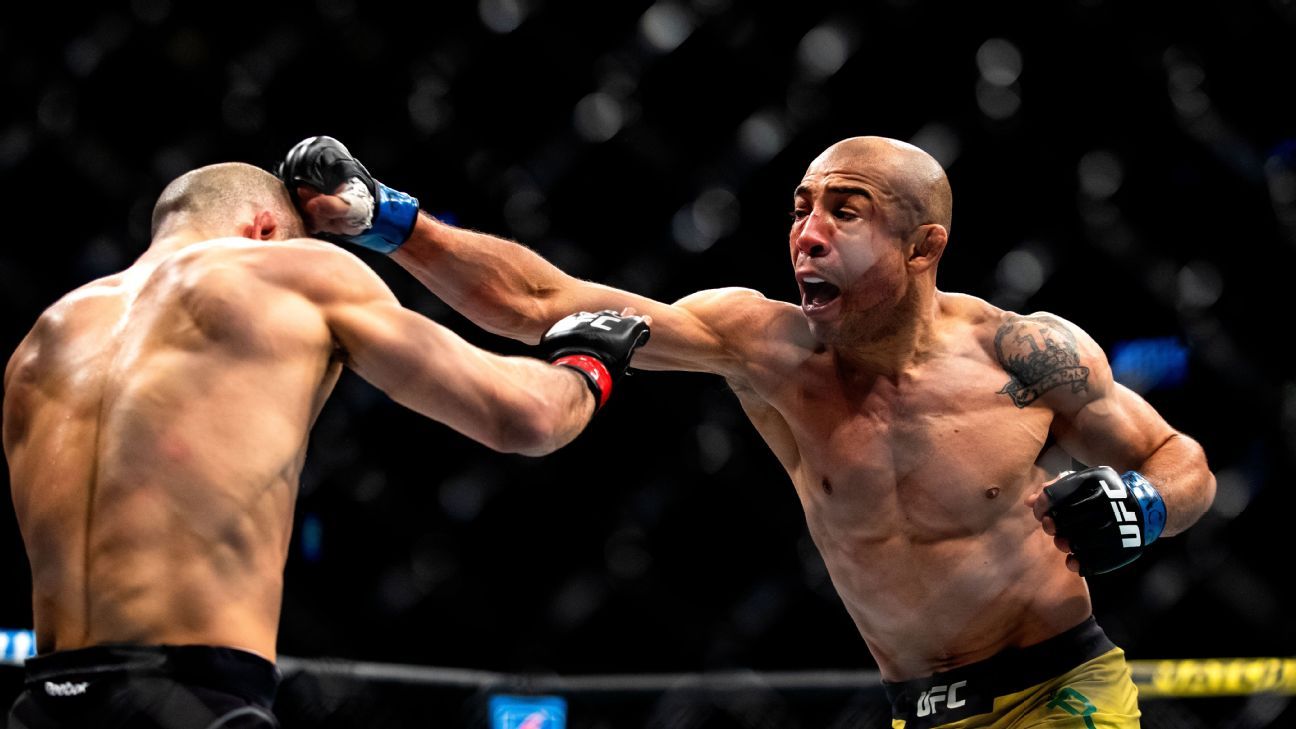 Let’s make something very clear right off the bat:

Jose Aldo getting a bantamweight title shot against Henry Cejudo isn’t the most egregious title shot in UFC history.

No, that distinction still belongs to Alexander Gustafsson, who got a shot at then-light heavyweight champion Daniel Cormier in 2015 following a brutal knockout loss to Anthony Johnson.

But, this one feels different.

Why? Well, Aldo is on a two-fight losing streak. Oh, and he’s 0-1 as a bantamweight.

The only justification I can muster up for this title fight is that the event, UFC 250 on May 9, is taking place in Brazil, Aldo’s home country. That’s it.

Now, I know what you’re probably thinking: Aldo deserved to beat Marlon Moraes in his previous fight, which was his bantamweight debut. That’s fair, I suppose. So then let’s look at his fight before Moraes, shall we?

So yes, the man fighting for the bantamweight title on May 9 is on a two-fight losing streak.

Now, let’s be honest: getting a title shot off a loss isn’t a new phenomenon. In fact, some of the more high-profile title fights ever have involved a fighter coming off a loss. Nick Diaz at UFC 158, Chael Sonnen at UFC 159 and Miesha Tate at UFC 168 come to mind.

The difference is, those fighters weren’t on losing streaks.

OK, so let’s talk about fighters on losing streaks getting title shots. That isn’t technically new, either. Frankie Edgar at UFC 156 and Holly Holm at UFC 208 had lost two in a row when they fought for a belt.

Even next weekend’s UFC 248 event in Las Vegas features a title fight with a fighter on a losing streak: Yoel Romero. However, one of those fights was supposed to be a middleweight title fight against then-champion Robert Whittaker, but after Romero missed weight it was turned into a non-title affair. I’m not sure if that one is better or worse, but it still feels a bit different than what is happening at UFC 250.

You see, a situation like the one at UFC 250 has happened only once before in the 26-plus year history of the UFC.

In 1997, Tank Abbott entered his UFC heavyweight title fight against Maurice Smith on a two-fight losing streak. Abbott was stopped in both fights, by the way, and neither of those losses were in title fights. He ended up losing to Smith, as well.

So it has been 23 years since a situation like this came about. Truth be told, it was a lot more acceptable back then because the sport was 4 years old and there just weren’t enough MMA fighters out here. That certainly isn’t the case anymore.

The UFC title is the most prestigious belt in MMA. It should mean something when you fight for it and a heck of a lot more when you win it. If we’re going to start handing title shots to legends on a losing streak, where does that slippery slope end?

Aldo is a legend. A first-ballot Hall of Famer. The greatest featherweight champion ever. He put that division on the map and deserves all the praise in the world for it. But he doesn’t deserve this title fight.

Cringe gimmick aside, Cejudo generated so much good favor within the MMA community last year when he single-handedly saved the flyweight division and then won the bantamweight belt, too.

Less than a year later, he’s about to be stripped of the flyweight title due to inactivity and has openly campaigned for this Aldo fight while dismissing the other three more deserving contenders along the way.

Remember, 12 years ago, Cejudo won his Olympic gold medal because he earned it. It was not handed to him. I know MMA title fights aren’t as cut and dried, but if anyone should understand and respect the meritocracy concept in this sport it’s Cejudo.

Unfortunately, by accepting this fight he’s only watering down the title he currently holds.

Speaking of title shots, while I would rather see Tyson Fury fight Anthony Joshua next, I do like the fact that Deontay Wilder has a rematch clause he can exercise. Why isn’t this a thing in MMA? Of course, I wouldn’t give it to every champion, but long-reigning champions (i.e., Woodley, Tyron) would certainly qualify.

I don’t doubt for a second that Wilder’s elaborate ring entrance outfit was heavy and might have led to some fatigue, but I can’t believe he’s using that as an excuse for his performance. I would have kept that one very close to the vest.

I’m bummed to hear that Wilder is considering firing his co-trainer Mark Breland for throwing in the towel Saturday night. Trainers shouldn’t only be hired to help a fighter train for a fight, but also to save them from themselves. That’s what Breland did. Wilder wasn’t winning that fight. By stopping it when he did, Breland stopped Wilder from suffering further damage, as well. He should be celebrated, not fired.

I wish Karolina Kowalkiewicz‘s corner did the same thing Saturday night when it became very clear she couldn’t see out of her right eye. Did you see her literally covering her eye in the middle of the fight? That’s not intelligently defending yourself. That fight shouldn’t have gone the distance. Corners need to stop fights way more often in MMA.

Paul Felder vs. Dan Hooker was better than I thought it would be. I didn’t think that was possible considering the high hopes I had for it.

I think Felder won the UFC Auckland main event ever so slightly, three rounds to two. But it was close; real close. I totally sympathize with the sentiment of missing his daughter and the toll it takes on him as he’s preparing for these fights, but I also wonder if he’ll reconsider when he heals up. He entered the fight a winner in five of his past six and on a two-fight winning streak, after all.

As for Hooker, I don’t think he’ll get the Justin Gaethje fight next, though I do appreciate the callout. As I mentioned last week, Gaethje is the current front-runner to fight Conor McGregor. I don’t hate the Dustin Poirier callout either, but Poirier seems ready to go. So, if I were in charge, I’d book Poirier vs. Al Iaquinta next, and Hooker vs. the winner of next month’s Kevin Lee vs. Charles Oliveira fight.

I am glad Israel Adesanya quickly apologized for using the 9/11 tragedy as trash-talk fodder. By all accounts, Adesanya is a good person with a kind soul. I enjoy speaking to him very much. I don’t think he meant to be malicious, but 9/11 or any other tragedy should never be used to hype a fight. Truth is, he’s lucky that didn’t turn into a bigger deal leading up to his title fight. Hopefully it is a lesson learned.

Sorry to hear Chan Sung Jung needs eye surgery, after all. That all but confirms Max Holloway will be next for Alexander Volkanovski, most likely on June 6 in Perth, Australia.

Brad Riddell waking up to teach a class to a bunch of people looking to get into shape at 5 a.m. the morning after his three-round battle at UFC Auckland is one of the coolest things I’ve seen a UFC fighter do. Kudos to him.

Saturday’s Joseph Benavidez vs. Deiveson Figueiredo bout will mark the first UFC flyweight title fight that doesn’t feature Demetrious Johnson or Henry Cejudo. Interesting, right? There are also two women’s featherweight fights on this weekend’s UFC Norfolk card. That feels like a big deal. That’s two divisions that were left for dead last year on display this weekend in a fresh way. I dig it.