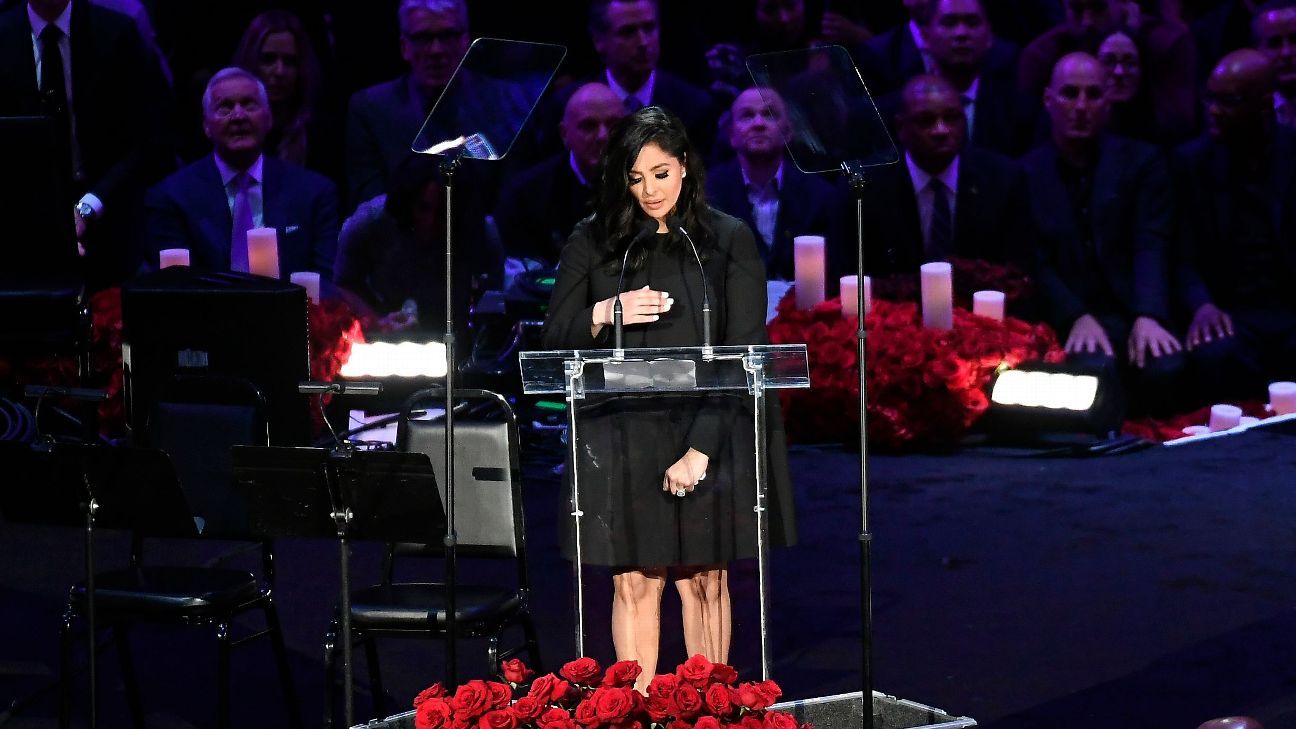 LOS ANGELES — Vanessa Bryant offered a poignant portrait of her NBA superstar husband and their daughter Monday at a sold-out memorial service for the two, who were among nine people killed last month in a helicopter crash in Los Angeles.

Speaking at times through tears, Vanessa praised Kobe’s devotion — calling him “the MVP of girl dads” — as she addressed thousands of fans gathered at Staples Center to remember Bryant and 13-year-old Gianna.

“God knew they couldn’t be on this Earth without each other,” she said. “He had to bring them home to have them together. Babe, you take care of our Gigi.”

The service took place at the downtown arena where Bryant played for the Los Angeles Lakers for 17 seasons of his two-decade NBA career.

The ceremony began with Beyonce performing her songs “XO” and “Halo” with dozens dozens of backup musicians.

After Jimmy Kimmel welcomed the crowd, Vanessa Bryant remembered the family’s life with Gianna, describing her as a sweet, thoughtful soul who loved always kissing her mother good morning and goodnight.

Vanessa said Gianna loved swimming, singing along with hit songs, baking cookies and watching “Survivor” and NBA games with her father. She says the 13-year-old loved basketball so much she even offered the boys’ school team advice.

Vanessa predicted that Gianna could have become “the best player in the WNBA.”

She then eulogized the husband she had been with since 1999, saying they had planned to renew their vows and often talked about how they looked forward to becoming the “cool grandparents” after their kids have their own children.

“He was the most amazing husband,” she said. “Kobe loved me more than I could ever express or put into words. I was fire. He was ice. Vice versa at times. … He was my everything.”

Jordan gave a lengthy speech through tears, and joked that he’ll have to “look at another crying me” — referencing the famous crying Jordan meme. He said he was grateful to be given the opportunity to “celebrate the gift that Kobe gave us all.”

“What Kobe Bryant was to me, was the inspiration that someone truly cared about the way either I played the game, or the way that he wanted to play the game,” Jordan said. “He wanted to be the best basketball player that he could be. And as I got to know him, I wanted to be best big brother that I could be.”

Jordan concluded the speech saying: “When Kobe died, a piece of me died.”

Shaquille O’Neal spoke next and compared his partnership with Kobe to that of John Lennon and Paul McCartney of The Beatles — whose competitive rivalry only fueled them to make better music.

O’Neal mentioned the time he reminded Bryant there is no “I” in “team.”

Bryant had a retort.

The service featured several other speakers who were close with the Bryant family, including Diana Taurasi, Geno Auriemma and Rob Pelinka.

Pelinka told the story of texting with Bryant just minutes before his death. Pelinka was in church while Bryant was in the air on the helicopter. Bryant was reaching out to see if Pelinka had ties to a baseball agent, because he wanted to set up his friend’s daughter with an internship.

“Kobe’s last human activity was heroic,” Pelinka said. “He wanted to use his platform to bless and shape another’s life.”

Auriemma talked about the excitement that Gianna showed while visiting UConn, where she had hoped to one day play basketball. “Gianna passed the ball when she was open. I thought, ‘she is not listening to her father,'” Auriemma joked.

Money from ticket sales was to be given to the Mamba and Mambacita Sports Foundation, which supports youth sports programs in underserved communities and teaches sports to girls and women.

Bryant played his entire 20-year NBA career with the Lakers, who moved from the Forum to Staples Center when it opened in 1999. The five-time NBA champion’s two retired jersey numbers — 8 and 24 — hang high above the arena where he became the third-leading scorer in league history until Lakers star LeBron James passed him on the night before Bryant’s death.

Bryant’s death caused an outpouring of grief across Los Angeles, where he remained the city’s most popular athlete into retirement. Dozens of public memorials and murals have been installed around the sprawling metropolis, and thousands of fans gathered daily outside Staples Center to commiserate after the crash.

Symbolic meanings ran throughout the ceremony, which was held on a 24-foot-by-24-foot stage. Vanessa chose Feb. 24 as the date of the memorial in honor of the uniform numbers of Kobe and Gianna, who wore No. 2 on her youth basketball teams.

A private funeral was held for Kobe and Gianna Bryant in Orange County on Feb. 7.

ESPN’s Dave McMenamin and The Associated Press contributed to this report.