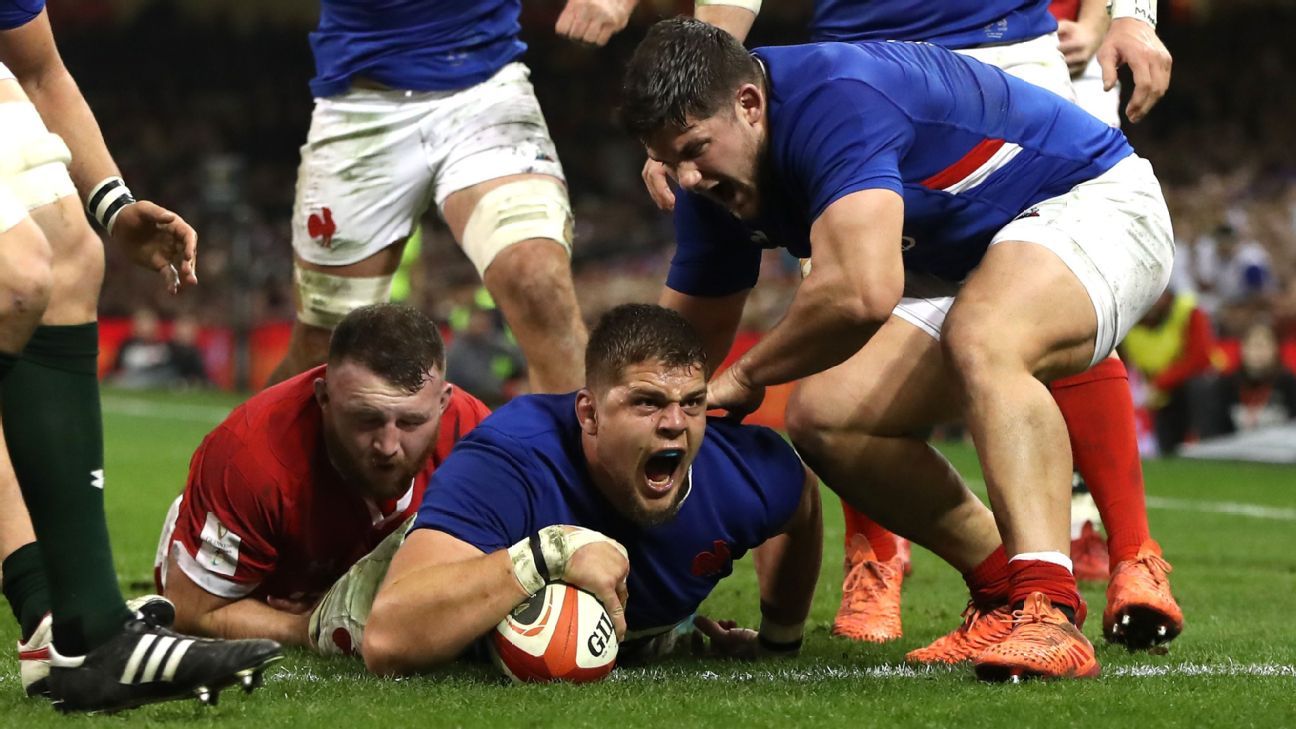 The weather, it turned out, did not have as much of an impact on the third week of the 2020 Six Nations as the midweek forecast suggested it was going to.

Rome, as predicted, basked in late-winter sunshine as Italy and Scotland traded errors. The conditions were taken out of the equation as the Principality roof was closed for Wales versus France, by some distance the match of the tournament so far; and the predicted hooley at Twickenham on Sunday was entirely on the pitch as England and Ireland tetched at one another under a dolorous sky that, in the end, proved nowhere near as threatening as it looked.

Now the matches are over, the data gathered, and the numbers crunched. And here is ESPN’s Fantasy Rugby Team of the Week, which features — as you’d expect — four French players, but also — as you may not expect — four Scots, three Welsh, just two English and one each from Ireland and Italy.

Looking at the ownership stats, some managers may have moved up their tables a bit…

Must-win games are often gnarly, tension-fueled affairs. Italy-Scotland was, for both sides, a must-winner of the first order. So Hogg’s solo try midway through the first half, a contender for try of the tournament, went a long way to calming Scottish nerves. And he was dangerous all afternoon in Rome, for good measure. A true captain’s performance.

Daly makes it a trio of fullbacks occupying the three outside back positions in ESPN Fantasy Rugby’s Team of the Week. That’s cool. We allow that. The Saracens player probably did enough to show that he could, after all, be a long-term option for England at 15.

Tompkins probably had a point to prove after last week’s outing in Dublin and, to be fair, he went some way to proving it with some dangerous attacking play, though it was his pass that Romain Ntamack intercepted at a crucial time in the game.

Big and solid in defence, and scored a decent enough try. That equals a Fantasy Rugby points-busting week. Expect to see him start again next time out against France in Edinburgh.

What riches France now have at fly-half. If Ntamack, who scored 17 of France’s 27 points in Cardiff and effectively shut the door on a Welsh fightback with his 52nd-minute interception try, picks up a knock, they have Mathieu Jalibert and Louis Carbonel to call on — with Antoine Dupont, Baptiste Serin and Thomas Ramos all capable of doing the job, too, if needed.

Clearly an awkward week — in Fantasy Rugby terms — for the scrum-halves on show. Even France’s Dupont didn’t impress the cold, calculating stats bots at ESPN Towers. To be fair, Williams added some spark to Wales when he came on, but it shows how hard points were to come by when a replacement who doesn’t score a try gets the nod here.

Scotland’s back row dominated Italy all Saturday afternoon, and Watson was the dominant member of that trio. He was a constant menace at the breakdown, a brute in defence and a threat in attack. If points could be awarded for artistic impression, he’d have scored a load more, too.

No player of the match award for the La Rochelle eight this week — that went to fly-half teammate Ntamack. Even a points-costing yellow card, however, can’t keep the ever-present back rower out of ESPN Fantasy Rugby’s Team of the Week. Look, if you haven’t already, just pick him, alright?

No points on the board for Italy, but they were a thorn in Scottish sides for much of the afternoon, and Polledri, as Gloucester fans have been telling anyone who’ll listen for years, was the spikiest of them.

Not so very long ago, Thomas Thomas Castaignede was questioning whether South African-born Willemse was French enough to play for France. Never mind that the player gained French citizenship before donning Les Bleus‘ shirt. The lock still has his detractors, but his blood-and-guts performances alongside Bernard Le Roux in this Six Nations are beginning to silence them. And his roar of triumph on scoring a deserved try should silence are few more.

The other half of an all-southern hemisphere-born engine room in ESPN Fantasy Rugby’s Team of the Week. A sure thing on Scotland’s lineout and a nuisance on Italy’s, and a Jonny Gray-standard tackling machine.

The tighthead’s hard work in defence was rewarded in attack with a useful try — worth its weight in gold for Fantasy Rugby managers — as Wales fought to stay in the game against France. He did well scrum-time too, where the pressure was heightened due to the prematch mind games… at least he did until Demba Bamba came on.

A second replacement in the front row of ESPN’s Team of the Week. Another try-scorer. England are at home to Wales next time around, then face Italy in Rome on the final week of this year’s Six Nations. Do not be too surprised to see the Exeter player start at least one of them…

Was on the pitch for a little over 20 minutes, but it was enough time to burrow over the line for the try that made him Ireland’s only representative in the Team of the Week for round three of the 2020 Six Nations. His post-try scowl is thoroughly meme-worthy.