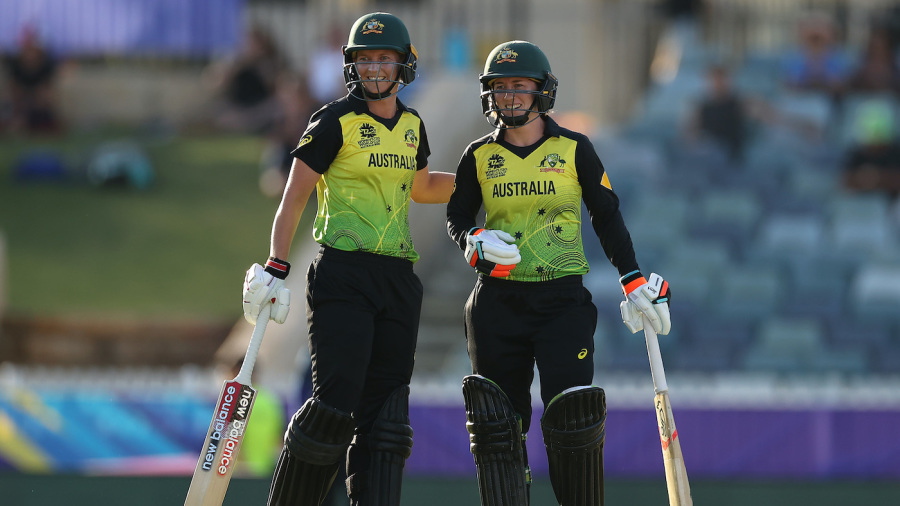 Australia are not playing well at all. Australia are still in the T20 World Cup. These two truths were undeniable at the end of a white-knuckle encounter with Sri Lanka at the WACA Ground, which on several occasions looked like being the day in which Meg Lanning’s No. 1-ranked side were eliminated at the first available opportunity.

Sri Lanka, having also lost their opening fixture, had never beaten Australia in a T20I but got closer than most anybody expected. Putting up a sound total and defending it desperately has been a more than useful strategy so far in this tournament, and at 3 for 10, the hosts were in all sorts of trouble thanks to the swing of Udeshika Prabodhani.

Lanning and Rachael Haynes put together a partnership, however, and they were given what turned out to be much-needed assistance by both the umpires – not ruling Lanning caught behind when she was on 15 – and the Sri Lankans, who dropped both Australia’s captain and deputy when the game could easily have swung back their way. In the end Australia scrambled to victory with three balls to spare. They are still in the tournament, but they have plenty of improving to do.

Having never lost to Sri Lanka in 16 matches across formats, Australia had to be wary of Chamari Atapattu after her glorious 103 in an ODI in Brisbane in October. Megan Schutt broke through early, having found some of her trademark new-ball swing away from the left-hand opener Hasini Perera, but otherwise Lanning’s team could not find a way to confound Atapattu before she had given Sri Lanka a serviceable start in conditions that, in considerable breeze and on a fresh, fastish pitch, had plenty to offer the bowlers.

Critically, Atapattu gained some handy support from Nos. 3, 4 and 5 as Umesha Thimashini, Anushka Sanjeewani and Nilakshi de Silva all contributed. Their innings were at varying degrees of fluency, Thimashini most striking in her cover drives off Ellyse Perry, but they ensured that once Atapattu departed, caught at extra cover the ball after she was very nearly run out, the Sri Lankan effort was not to peter out entirely.

Retained in the team after being a surprise choice for the opener against India, Molly Strano did not share the new ball this time but still had a key role bowling in the middle of the innings and then returning at the death. Her dismissals of Sanjeewani and Ama Kanchana in the same over were moments in which it felt as though Australia were taking control of proceedings, but in her final over of the innings, Strano erred full and then short.

This allowed de Silva to drive and pull a pair of priceless fours, making the 19th over of the innings the most expensive of all at a cost of 12. In a low-scoring and pressure-filled game, these runs were vital for Sri Lanka and troubling for the Australians, pushing their required rate in the chase beyond a run-a-ball.

It is more than 20 years since Chaminda Vaas set-up Sri Lanka’s first ever Test victory over Australia by swinging the new ball around corners in Kandy. There was something similarly memorable about the way Prabodhani curled the white ball into the stumps of Alyssa Healy and Ashleigh Gardner at the start of Australia’s chase, raising the anxiety of the hosts.

Both Healy and Gardner are in the top order to go on the attack, and as such their gates are more open to the inswinger than some others. But it was still a transfixing sight to see the new ball curling back through their somewhat crooked defences in the midst of a new-ball spell from Prabodhani. She was to bowl her full allotment of overs in the one spell, by which time Australia were a wobbly 3 for 27, with Shashikala Siriwardene turning the ball sharply at the other end.

Facing an equation that was dialled up from manageable to tricky, and a moving ball, Lanning and Haynes benefited from plenty of good fortune even as they showed more solid defences than Healy and Gardner. Lanning was facing her second ball when she played and missed and Sri Lanka reviewed for caught behind – revealing that the bat had brushed the wicketkeeper’s gloves rather than the ball. On 15, Lanning was caught behind cutting, but this time given not out, and then she was to be dropped by Sanjeewani when on 33.

Haynes, who took on a more aggressive posture in the partnership, was most vitally dropped on 26 just as the required rate had begun to spiral away from Australia. Duly revived, she was able to connect with the big leg-side shots off left-arm spin that have become something of a trademark, taking 18 runs off the 16th over to pull back the asking rate from 8.8 an over to a far more manageable 6.5 in one fell swoop. From there, Australia wobbled further, but got over the line. Lanning’s clenched fist after diving for the winning run said it all.