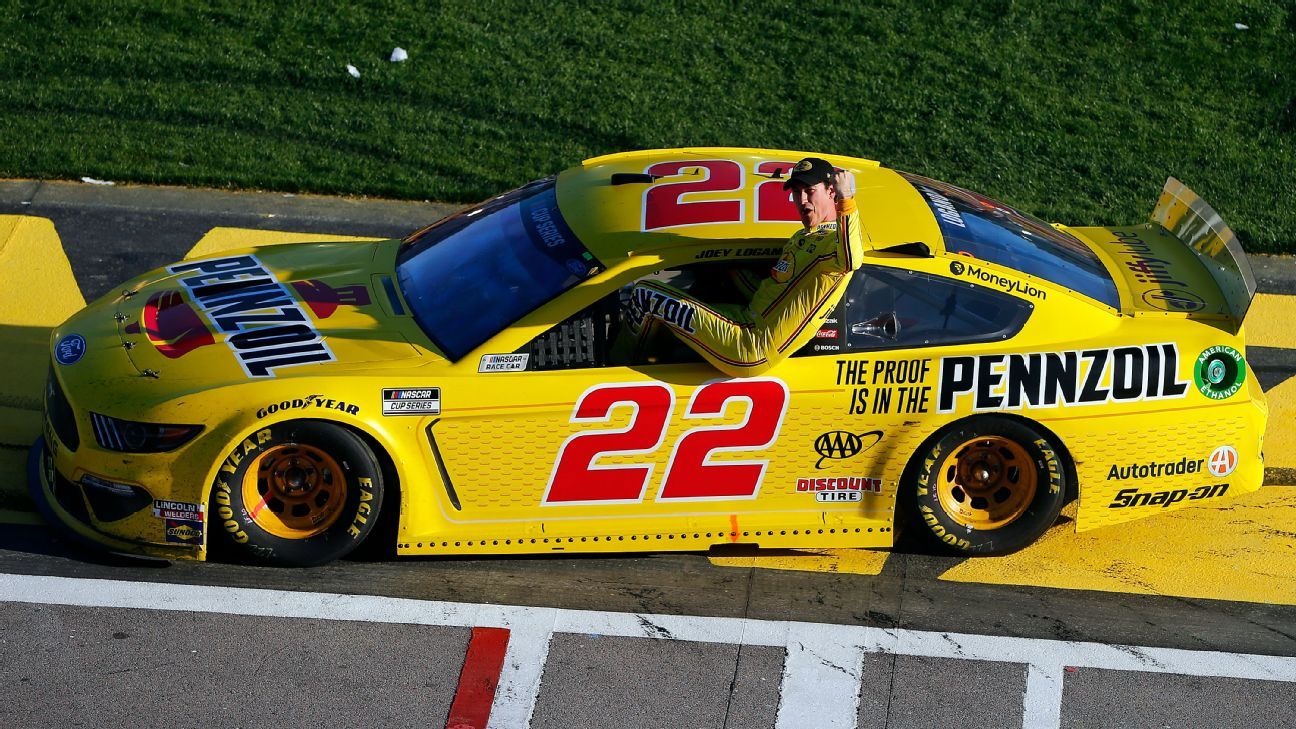 LAS VEGAS — The adjustments to a major offseason overhaul at Team Penske continued Sunday at Las Vegas Motor Speedway, where miscommunication between Joey Logano and his new crew chief led to a botched final pit stop in the NASCAR Cup Series race.

Logano still wound up in Victory Lane for the second year in a row, winning a two-lap sprint to the finish that ended under caution.

A caution with six laps remaining forced teams to make strategic decisions, and crew chief Paul Wolfe told Logano to head to pit road for new tires. Logano didn’t hear Wolfe and remained on the track, a move that cycled him into the lead but put him in position to hold off a slew of contenders on fresh tires.

Logano knew it was critical to get his Ford separated from the pack quickly on the restart to have any shot at the win.

“Clean air was going to be key with old tires,” he said. “If I got swallowed up by a couple cars, I was just going to fall backwards really quick.”

Logano got a push from Ricky Stenhouse Jr. on the restart with two laps remaining, then threw a block on William Byron to maintain his position out front in what Logano called “the winning move.”

“I was able to get down in front of him and then be able to separate myself a little bit from the field,” he said.

Logano, the 2018 Cup series champion, just missed advancing to the title race last season. At the start of this year, owner Roger Penske announced he’d swapped the crews of Logano, Ryan Blaney and Brad Keselowski, with Logano getting Wolfe, the crew chief who led Keselowski to a Cup title.

They’d worked together at the track the past three weeks, and Logano praised the new pairing.

“He’s done such a great job, and it’s been fun getting to know each other, and the whole team,” Logano said. “The pit crew was amazing today. I think we gained a spot every time at least. Proud of the effort that everyone has put in over the offseason.”

Logano had taken the white flag when a crash occurred deep in traffic to bring out the caution, freeze the field and secure the victory for the No. 22 Ford.

The 24th victory of Logano’s career broke a tie with Ricky Rudd for 35th on NASCAR’s all-time wins list.

Matt DiBenedetto, in a Ford for the Wood Brothers — a Penske partner — for his second race, was 0.491 seconds behind to tie his career-best finish.

“This is all just too surreal,” he said. “Tough to be that close, but, hey, this is only the second race of the season. So it was the strength of this team. It’s so cool to have the backing of all the people that allow me to drive this thing.”

Stenhouse, pole sitter for the Daytona 500 a week ago, was third in a Chevrolet in his second race for JTG-Daugherty Racing.

“So far, so good,” Stenhouse said. “Two weeks, we’ve been fast this week — we weren’t bad this week — and we know what we need to work on.”

Kyle Larson and Ty Dillon rounded out the top 10.

Daytona 500 winner Denny Hamlin was the highest-finishing Toyota driver in 17th as the brand and Joe Gibbs Racing struggled the entire 400 miles.

Ross Chastain drove the No. 6 Ford for Roush Fenway Racing as the replacement driver for Ryan Newman, who suffered a head injury in a crash on the final lap of Monday night’s Daytona 500. It ended a streak of 649 consecutive starts dating to 2002 for Newman, who has no timetable for a return, but his team said Sunday that he intends to get back in his car.

Chastain finished 29th, in part because of a late spin, but ran inside the top 10 earlier in the race. Roush Fenway has not indicated who will drive the car next week.

Chastain was bitterly disappointed as he headed to his Xfinity Series car for the resumption of Saturday’s race, which was rained out after 50 laps and rescheduled for after the main event.

“I was just overdriving there at the end, for sure. It just got away from me there and got loose,” Chastain said. “The car deserved a lot better finish. I just didn’t have great restarts. These guys kind of ate me alive on the restarts and I’d lose three or four spots every time, and picked the wrong lines through [Turns] 1 and 2, and then 3 and 4 again, I just kept making silly mistakes that I should learn from after I make the mistake once. I just have to be better.”

Chase Elliott appeared to be the driver to beat through the first two stages, both wins for Elliott in his Hendrick Motorsports Chevrolet.

But his shot to win the race ended after a tire issue following a pit stop from the lead caused Elliott to hit the wall. He had led five different times for 70 laps, with the two stage victories, before heading to pit road for repairs.

An emotional week for Blaney ended with an 11th-place finish at Las Vegas and Blaney moving toward closure after Newman’s crash on the final lap of Monday night’s Daytona 500.

It was contact from Blaney that triggered Newman’s crash, and Blaney said Sunday morning before the race that he struggled in the first few days over his role in the accident.

“I talked to his dad on Tuesday and said when he’s feeling better, I’d like to talk to Ryan,” Blaney told The Associated Press. “Ryan called me Wednesday, and just talking to him, hearing him, really made things easier.”

Blaney said he’d never before been involved in such a violent crash and the potential of Newman being hurt rattled him.

“You never want to see something like that, especially coming off your own nose,” Blaney told AP.

Blaney thought he had a shot to win the race until he was one of the drivers to pit on the final stop and failed to make up the difference with his fresh tires.