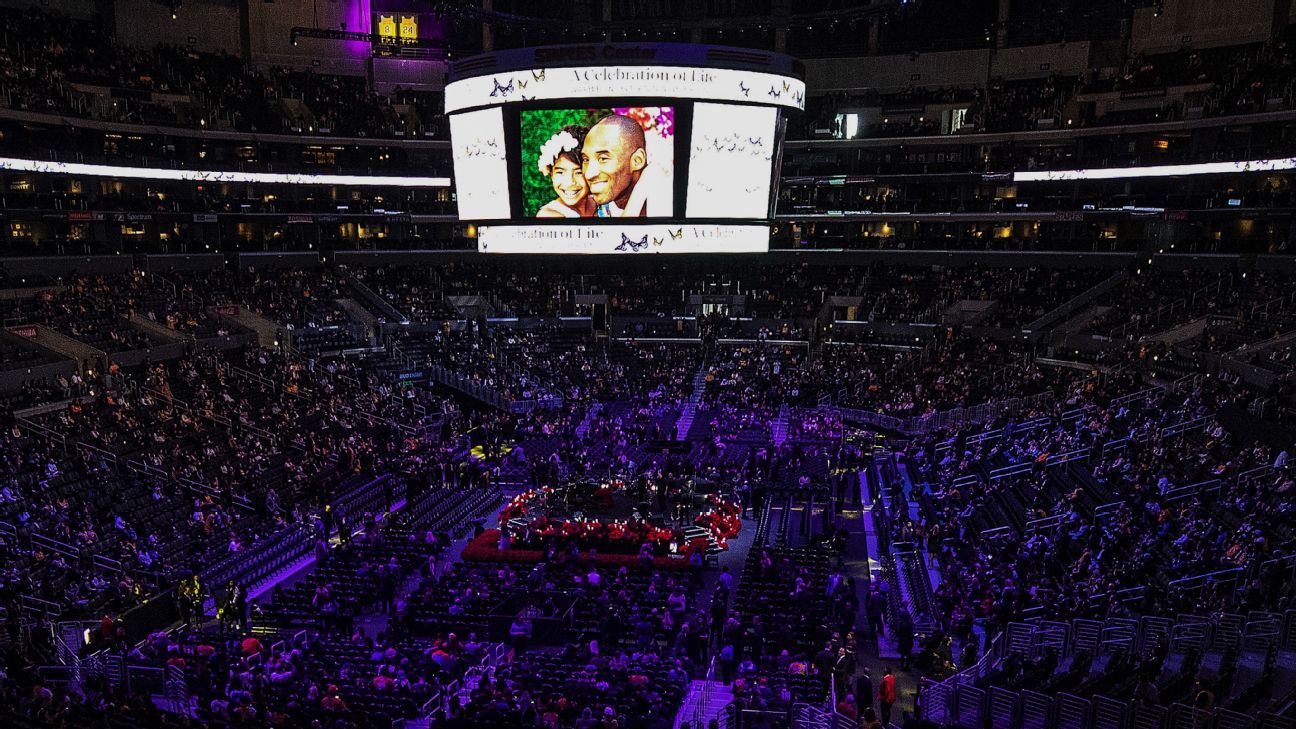 A memorial service celebrating the lives of Los Angeles Lakers legend Kobe Bryant and his daughter Gianna is underway at Staples Center in downtown L.A. The date — Feb. 24 — reflects the basketball jersey numbers worn by Kobe (No. 24) and Gianna (No. 2).

The service is being held just less than a month after Bryant, 13-year-old Gianna and seven others died in a helicopter crash in Calabasas, California, on Jan. 26.

More than 20,000 people — friends, family and those who acquired tickets through a lottery (80,000 applied) — crowded into the arena, with ticket proceeds benefiting the Mamba & Mambacita Sports Foundation.

A Celebration of Life for Kobe and Gianna Bryant is airing live on ESPN, the ESPN App and ESPN Radio, and you can follow along here as Los Angeles, the Lakers and the NBA world honor the basketball legend.

Attendees at Kobe and Gianna’s Celebration of Life are receiving a book filled with Bryant family photos.

– @ramonashelburne on LeBron helping the city of Los Angeles come together after Kobe’s death. pic.twitter.com/km692Itkmk

The Pelicans are expected to have 3-4 players, head coach Alvin Gentry, GM Trajan Langdon and VP of business operations and player development Swin Cash attend “A Celebration of Life for Kobe and Gianna Bryant” at Staples Center tomorrow morning in LA, @TheUndefeated has learned.

People closest to Kobe Bryant share the stories they’re looking back on ahead of Monday’s memorial. — Ramona Shelburne

The morning after LeBron James passed Kobe Bryant for third in all-time scoring, on the flight home from Philadelphia, the Lakers learned of Bryant’s death. — Dave McMenamin

Kobe had the skill and knowledge to be any kind of player he wanted to be. — Zach Lowe

From his first NBA media day to his phenomenal final game, we reveal the untold stories behind the most legendary images of the Black Mamba.

From the archive: ESPN writers on Kobe