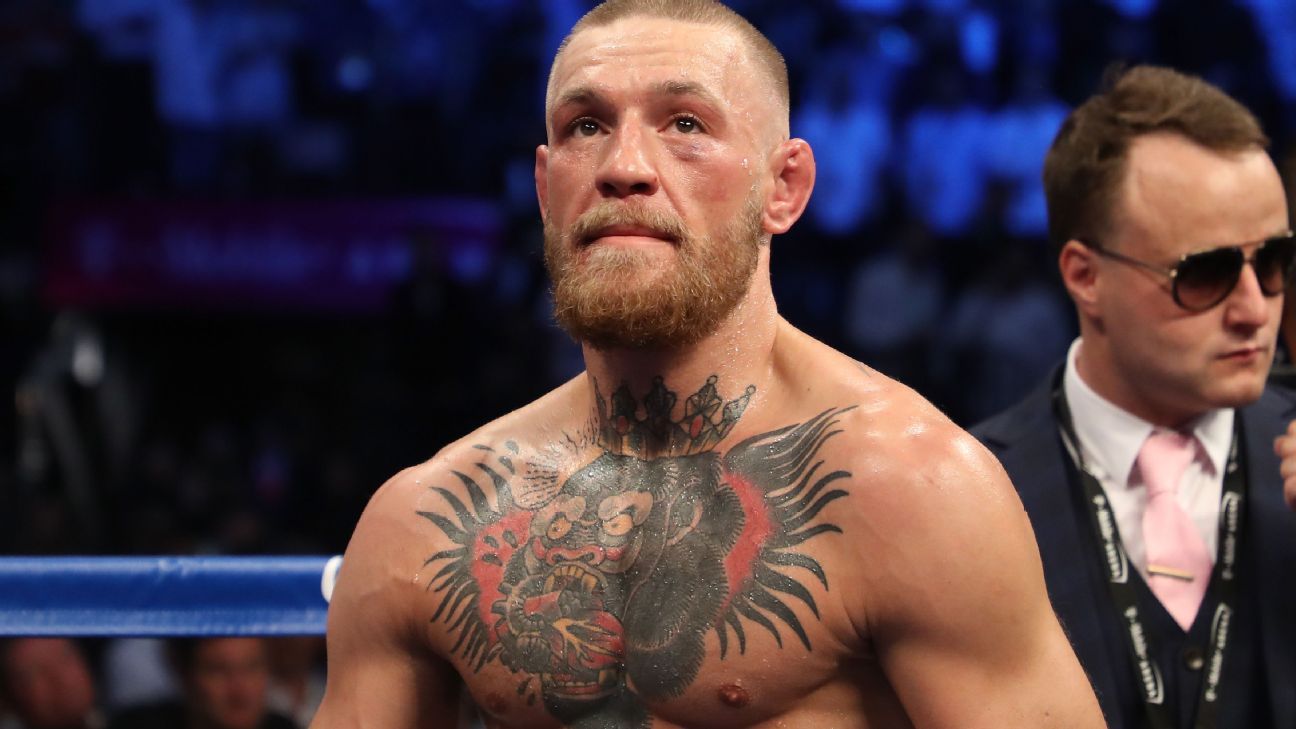 It’s been over a month since Conor McGregor‘s 40-second destruction of Donald “Cowboy” Cerrone. And while McGregor wanted to stay active in 2020, it’s possible he may wait out the winner of the Khabib Nurmagomedov–Tony Ferguson lightweight title fight on April 18 before booking his next bout.

UFC president Dana White said McGregor is next in line to challenge for the lightweight belt, and if the April 18 matchup falls through — as it has four previous times — McGregor will step in.

But is that too long to wait?

ESPN’s Ariel Helwani believes Justin Gaethje may be the front-runner — or possibly Nate Diaz in a trilogy bout. Jorge Masvidal also has been talked about as a potential foe, although the momentum for Masvidal to challenge welterweight champ Kamaru Usman is growing.

And when will Manny Pacquiao joining McGregor’s Paradigm management agency manifest into a boxing match between the two?

If McGregor faces Gaethje next, how do you see that fight going?

Okamoto: Crazy. Insane. Fight of the year, which Gaethje is no stranger to. The obvious handicap is to look at McGregor’s power and combine it with Gaethje’s willingness to get hit, and put your money on McGregor. I think there’s some truth in that handicap, but it oversimplifies things, of course. Gaethje’s pace and pressure would be a real challenge for McGregor, as it is for anyone. At the end of the day, though, I believe McGregor would be favored, because of the power and his exceptional counterstriking.

Raimondi: It’s a fight I’d really be curious to see. Earlier in his career, Gaethje would have had a hard time with a precision striker who has power like McGregor. But look at Gaethje’s past three fights. He beat Cerrone, Edson Barboza and James Vick by first-round KO/TKO without getting roped into a brawl.

Gaethje isn’t just a wild man anymore. He has become technical and strategic. He isn’t eating a lot of shots. His coach, Trevor Wittman, is one of the best in the game, and Gaethje has completely bought in. There’s a reason why Dustin Poirier said recently that Gaethje might be the hardest matchup for Nurmagomedov in the division.

How would Gaethje do against McGregor? Pretty well. If he can weather the early McGregor storm and take things into the later rounds, he would be in excellent position. Gaethje is still hittable, though, and McGregor is excellent at countering and landing right on the money. The X factor is Gaethje’s wrestling; he rarely uses it, but it’s a strength.

The new Gaethje could absolutely beat McGregor. The old one probably would have gotten starched.

Wagenheim: I know Gaethje has a strong wrestling pedigree, but that is not what has earned him all those postfight bonus checks. He prefers to stand and bang, and I have yet to see that strategy work against McGregor. If ever there was a time to trade leather with McGregor, it would have been last month, when the Irishman was returning from a long spell of inactivity and his vaunted precision and timing might have been off by just a hair — all it takes for Gaethje to land a telling blow. But Cerrone got that fight instead.

If Gaethje gets next, he’ll be facing a McGregor who will have had one added training camp behind him. If McGregor’s timing is on point, that would not bode well for Gaethje. I envision McGregor’s straight punches finding their target before a Gaethje bomb lands.

I think McGregor will fight __ next, because __

Okamoto: I think McGregor will fight Nurmagomedov next, because that’s what the UFC wants. Now, there are a few exceptions to this:

No. 1: If McGregor is adamant about fighting someone else this summer, I believe he would get his way. And I believe it would be against Gaethje … with Diaz and Masvidal as the other options, depending on who McGregor pushed for.

No. 2: If Nurmagomedov were to lose his title to Ferguson in April, McGregor vs. Ferguson would be booked immediately.

No. 3: If Nurmagomedov beats Ferguson and then refuses to fight McGregor, obviously McGregor would have to find another opponent. And honestly, it would not shock me if Nurmagomedov just outright refused the fight. He doesn’t believe McGregor deserves to face him a second time.

Raimondi: Diaz. He is the best available option, it seems, and McGregor vs. Diaz 3 is one of the biggest fights the UFC can put on. The two have one of the great rivalries in the history of the sport. A third fight is one the UFC had had on the back burner since their two-fight series in 2016. But now is as good a time as any to run it back.

Masvidal is an attractive next opponent for McGregor but is likely challenging Usman for the UFC welterweight title in July. The UFC wants McGregor to fight Nurmagomedov next, but Nurmagomedov is not interested.

That leaves names like Gaethje and Diaz. Gaethje wants that fight, and it would be incredibly intriguing. But from a pure box-office perspective, Diaz is the bigger name and the more compelling story. That’s usually the way McGregor goes.

Wagenheim: I’ll go with Masvidal because, well, it’s complicated. Let’s start with what McGregor wants: a second shot at Nurmagomedov and nothing else. McGregor is a cash cow who gets what he wants from the UFC. But while it takes two to tango in Buenos Aires, in Las Vegas it takes three: two fighters and a promoter.

White is on board, but Nurmagomedov is not. And the champ doesn’t seem like a guy who can be bought with promises of rubles upon rubles.

If McGregor and White opt to move on, the most logical Plan B would be Gaethje. A McGregor win over the hottest lightweight contender out there would make it difficult for Nurmagomedov to deny the Irishman a title shot. McGregor would have earned it. But one complication: Nurmagomedov and Gaethje have the same management, and if Nurmagomedov is denying McGregor the fight he craves, might McGregor retaliate by denying another Ali Abdelaziz fighter a life-changing payday?

Sounds petty, but this is prizefighting, which everyone says is just business, but it always tends to get personal.

That would bring Masvidal into play. White doesn’t like that matchup, for some reason, so he is said to be trying to book Masvidal against Usman for the welterweight title instead. But Masvidal is in this game to make money, and McGregor is a walking, talking bank vault. So that’s the fight I think we’ll end up with — unless Ferguson becomes the fly in the ointment on April 18 and changes the whole dynamic. Which would be just like him.

I think McGregor should fight __ next, because __

Okamoto: I think McGregor should fight Masvidal next, because it would feel like a fight between the two biggest stars in the game right now. Masvidal is coming off a perfect year in 2019. He went viral, and he won a “BMF” title over Diaz. Masvidal is the man of the moment. These are the two hottest names in MMA, and a fight between them would actually elevate both even higher than they are now. I don’t think it’s going to happen, but I’d love to see it. It would capture the sports world this summer.

Raimondi: Masvidal, because it’s the biggest fight the UFC can make at this very moment. McGregor is the biggest star in UFC history. No one would argue with that. Masvidal is, right now, the hottest name in the sport. Look at the crowds he was able to draw halfway across the world in Australia recently. The guy has become a giant name in the past year and is one of the best stories in MMA right now.

McGregor vs. Masvidal makes a ton of sense. McGregor is a natural lightweight, but he has fought at welterweight — Masvidal’s weight class — three times in his past five bouts. McGregor knocked out Cerrone at welterweight. Even though White has said Masvidal is a much bigger man, that doesn’t entirely add up. Masvidal fought at lightweight for eight years.

Masvidal is likely challenging for the welterweight title against Usman next, which is deserved. But it’s somewhat surprising that the UFC wouldn’t strike while the iron is hot and do McGregor vs. Masvidal.

Wagenheim: I’m less interested in whom McGregor should fight than I am in whom he shouldn’t. Coming off an overwhelming loss to Nurmagomedov and then a win over Cerrone — who had lost two in a row by KO — McGregor does not merit a title shot. He might get one, because money talks. But if I’m the matchmaker, I say no Nurmagomedov-Ferguson winner and no Usman.

Beyond that, McGregor should look inward and determine what he wants at this point in his career. If it’s a championship belt, he can earn his way to a shot at one by fighting Gaethje at lightweight or Masvidal at welterweight. If what McGregor wants is the biggest check possible, he should complete the Diaz trilogy or angle for another crossover spectacle — with Floyd Mayweather, Pacquiao or whichever boxer wants to cash in. It’s McGregor’s life, and he should get to choose anyone not wearing a shiny belt.

Do you think McGregor ultimately will box Pacquiao?

Okamoto: When you say “ultimately,” you mean “ever” — and “ever” is a long, long time. I don’t think it happens in 2020. But depending on where things go for both men moving forward, yes, I could see it happening. Pacquiao’s recent decision to sign with Paradigm Sports, the same management company that represents McGregor, is certainly not a bad sign for the prospects of that fight. But do I think McGregor vs. Pacquiao is a looming inevitability? No, I don’t feel that yet.

Raimondi: Probably. Now that Pacquiao has signed on with Paradigm, it seems it would be easier to make this fight than ever before. It’s doubtful it will happen this year. McGregor seems very focused on MMA. But in 2021, depending on how things shake out for both men? It’s not out of the realm of possibility.

It’s worth remembering, though, that there are still obstacles at play. For one, McGregor is still promoted by the UFC. If he were to box Pacquiao — let’s say at the new Allegiant Stadium in Las Vegas — the UFC would need to be a part of that deal. Is that something the UFC would even be interested in? That’s unclear. McGregor, though, has a way of moving mountains. It’s the kind of leverage that only the biggest stars in combat sports history have. McGregor is on that list. So, nothing is completely out of reach.

Wagenheim: I know these crossover spectacles are really about legacy and honor and challenging oneself, but allow me to be crass for a moment and inquire about one minor detail: Would McGregor be getting paid for this sweet science detour? Would Pacquiao pocket a few pesos? Would the UFC get its taste for allowing its contractually tied-up man to take part? Would these payouts exceed whatever else is on the table? If the answer to all of those questions is yes, then start the hype train moving down the track.