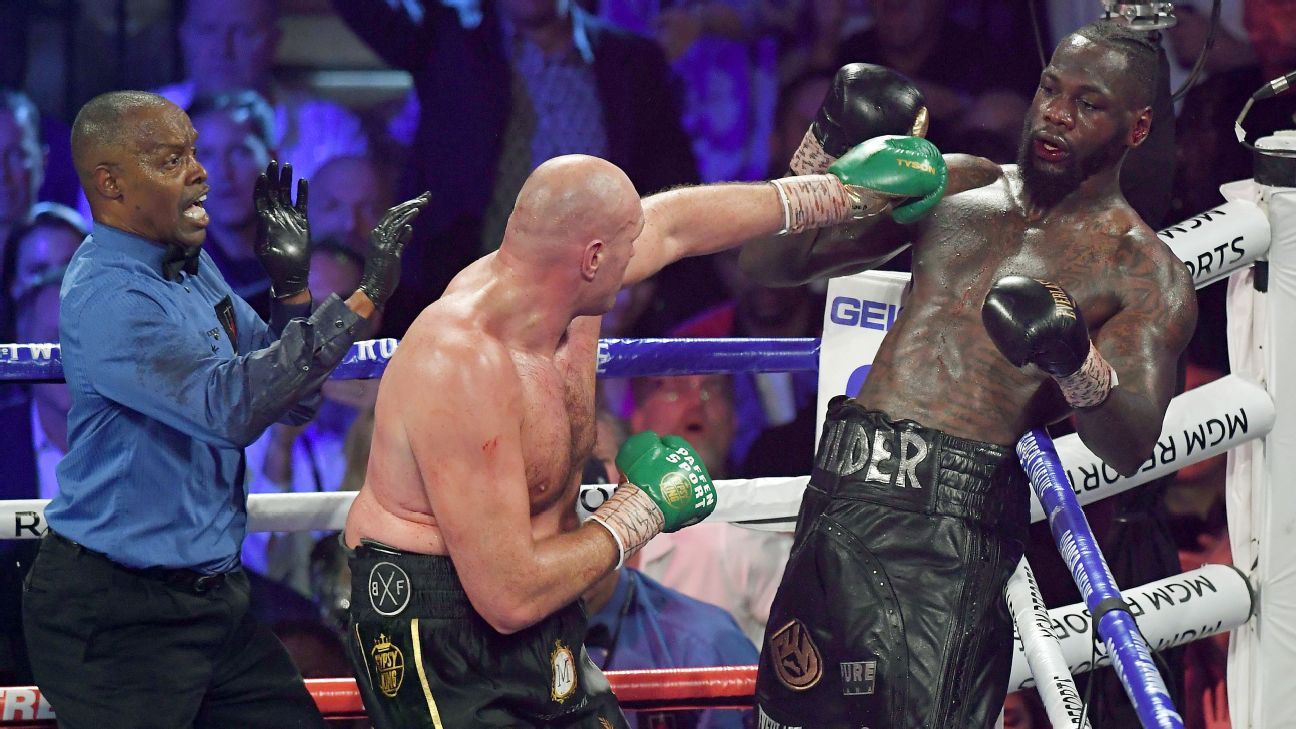 LAS VEGAS — It is a ritual that plays out before virtually every fight of consequence: Each boxer is asked about his plan for the bout and declines to offer any specifics for fear of giving too much information to his opponent.

But Tyson Fury is not your normal prizefighter.

“The Gypsy King” not only told the world exactly what his plan was going to be for his mega heavyweight championship rematch with Deontay Wilder, he was audacious enough to tell us over and over and over.

“I’ll meet you, Deontay, in the middle of the ring,” he said right to his rival’s face at one point. “I won’t be running. You won’t have to look anywhere for me. Just watch out for the right hand because you’re going to sleep in two rounds.”

Fury could not have been more specific with his plan, and he could not have been more right — well, except for the second-round part. Instead, it took Fury seven rounds to knock out Wilder to retain the lineal heavyweight title and take the WBC belt on Saturday night at a sold-out MGM Grand Garden Arena that had as electrifying an atmosphere as just about any of the nearly 100 fights I have covered there.

“I was pretty pissed because I predicted Round 2,” Fury, wearing a suit, green tie and no shirt, joked at his postfight news conference.

That Fury (30-0-1, 21 KOs) would divulge his plan — and then follow it to a T — is one of the things that made it so masterful. Not only do fighters not typically do that, but the style Fury said he he would fight in was the opposite of the style we have come to know from the British champ.

Fury has always been a boxer who relied on quickness and technical ability. A brawler and banger Fury is not. That held until Saturday, when he absolutely dominated Wilder (42-1-1, 41 KOs), leaving him dazed and confused before Mark Breland, Wilder’s co-trainer, threw in the towel as his fighter was pinned in a corner and being pummeled.

Fury said it was no big deal to give away his plan of attack.

“We didn’t mind revealing the game plan. We had nothing to hide,” Fury said. “I said what I was going to do — run across the ring, put him on the back foot and unload big shots on him. I’ve always been a slick master boxer — jab, move, get out of the way of everything. When I made the decision to move from [my previous trainer] Ben Davison, who done a fantastic job, by the way, I did it for a reason. Everybody was like, ‘This is a bad move, a really bad move.’ But it worked out for the best.”

Fury hired trainer SugarHill Steward, an old friend whose offense-first philosophy was handed down to him by his uncle, the late, great Emanuel Steward, one of the greatest trainers in boxing history.

“I believe in SugarHill. I believed in the style he teaches and I knew we’d get it right on the night,” Fury said. “Everything I did in the ring we practiced in the gym — setting up off the jab and landing the detonation right hand. Deontay Wilder is a very tough guy. He took a lot of good rights, and I think they done the right thing [throwing in the towel] because it was only a matter of time until he would get severely hurt.”

I asked Fury why he’d make such a radical style change when boxing against Wilder seemed to work well in the first fight. After all, most people thought he won that fight despite it being scored the draw.

“Everybody knows I’m a master slick boxer who can jab and move around the ring for 12 rounds. But that didn’t work last time,” Fury said. “I got a draw, and a draw is a failure to me because all I do is win, win, win. This time I wanted the knockout, and I think the only way I could guarantee that I was going to get a win was the knockout. So when me and SugarHill spoke, he told me that I would knock him out, and I believed in what he said.”

Throughout the fight, Fury forced Wilder backward. He took Wilder’s legs away, dropped him twice: in the third round — with a right hand that was supposed to Wilder’s money punch, not Fury’s — and again in the fifth round with, of all things, a left to the body. I couldn’t recall ever before seeing Fury do any sort of damage with a body punch.

“It’s the best performance I’ve ever seen from a British fighter in my time in boxing,” said Frank Warren, who co-promotes Fury with Top Rank and has been promoting fights for nearly 40 years. “When you think where he’s come from the last two years to where he is today, what an achievement.”

Indeed, after Fury won three major belts and the lineal title from Wladimir Klitschko in a big upset in 2015, Fury struggled. He was hooked on alcohol and drugs and overcome by mental health issues that left him suicidal. The notion that he would not only return to boxing, but reach the pinnacle, was virtually inconceivable.

Fury was able to get himself together and he returned after a 31-month layoff, won two tune-up fights against lesser opposition and then faced Wilder 14 months ago. In that memorable first fight, Fury looked very good putting his boxing skills to work against Wilder, whose punching power is devastating. He managed to drop Fury twice, but Fury, as he had done in battling his personal issues, rose each time, including from the now-iconic 12th-round knockdown.

Tyson Fury says he still wants to improve following his TKO victory over Deontay Wilder, and even cracks a joke about Wilder’s pre-fight trash talk.

“I always believed that if he couldn’t beat me [in the first fight], when I was only 50% the man I am today, that he never had a chance [in the rematch],” Fury said. “I can’t wait for the next fight, the rematch, hopefully, if he wants it.”

Wilder has 30 days to notify Fury’s team if he plans to exercise his right to an immediate trilogy fight. He didn’t attend the news conference Saturday because he was getting stitches in a cut inside his left ear, which bled for much of the fight, and also because he had trouble producing a urine sample for his doping test. However, both co-manager Shelly Finkel and co-trainer Jay Deas attended and said they believed Wilder would indeed go for the third fight next.

“Deontay will take the time, but you will see these guys in the ring again,” Finkel said. “I have told him many times I don’t expect to die but I’ve had insurance for 50 years. You have the rematch [option] for a reason, no matter what.”

Deas added, “Knowing him like I do, he will absolutely want the rematch. These guys have put on two tremendous fights already, so I certainly think the public will want it and I think we’ll want it, [Fury will] want it, so it seems a natural. I think it’s what you’ll see happen.”

Fury believes his rival will seek a third fight with him.

“I’m almost sure he’ll take a rematch because he’s a dynamite puncher and any time he can take somebody out,” Fury said. “I’m pretty sure we’ll run it back again. Whoever’s next will get the same treatment, that’s for sure.”

It didn’t sound like Fury planned to alter his style if that fight does come to pass.

“They said I can’t punch,” Fury said. “Deontay Wilder himself said I’ve got two pillow fists. … Not bad for an old, fat guy who can’t punch, eh? I did alright, didn’t I?”