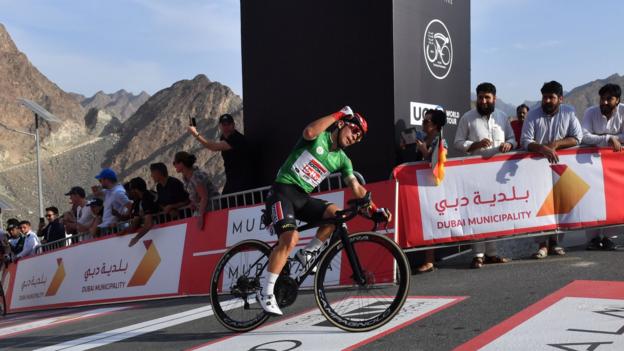 Australia’s Caleb Ewan moved into the overall lead of the UAE Tour with victory on stage two – but Britain’s Chris Froome lost time.

The four-time Tour de France champion was dropped by the peloton in the final 8km and crawled in 111th – three minutes and 46 seconds off the pace.

Ewan won the hilly 167km stage after edging Ireland’s Sam Bennett in a sprint to the top of Hatta Dam.

He takes over the race lead from Pascal Ackermann, who was dropped with Froome.

Britain’s Adam Yates finished the stage in eighth, four seconds off the pace, while Mark Cavendish was 124th, seven minutes and five seconds behind.

“I was happy with that win – it’s a really tough finish and we thought today would be harder than last year,” he said.

“The profile looked hard and because there was no wind it was straightforward. My team did a great job to drop me off in that final corner.”