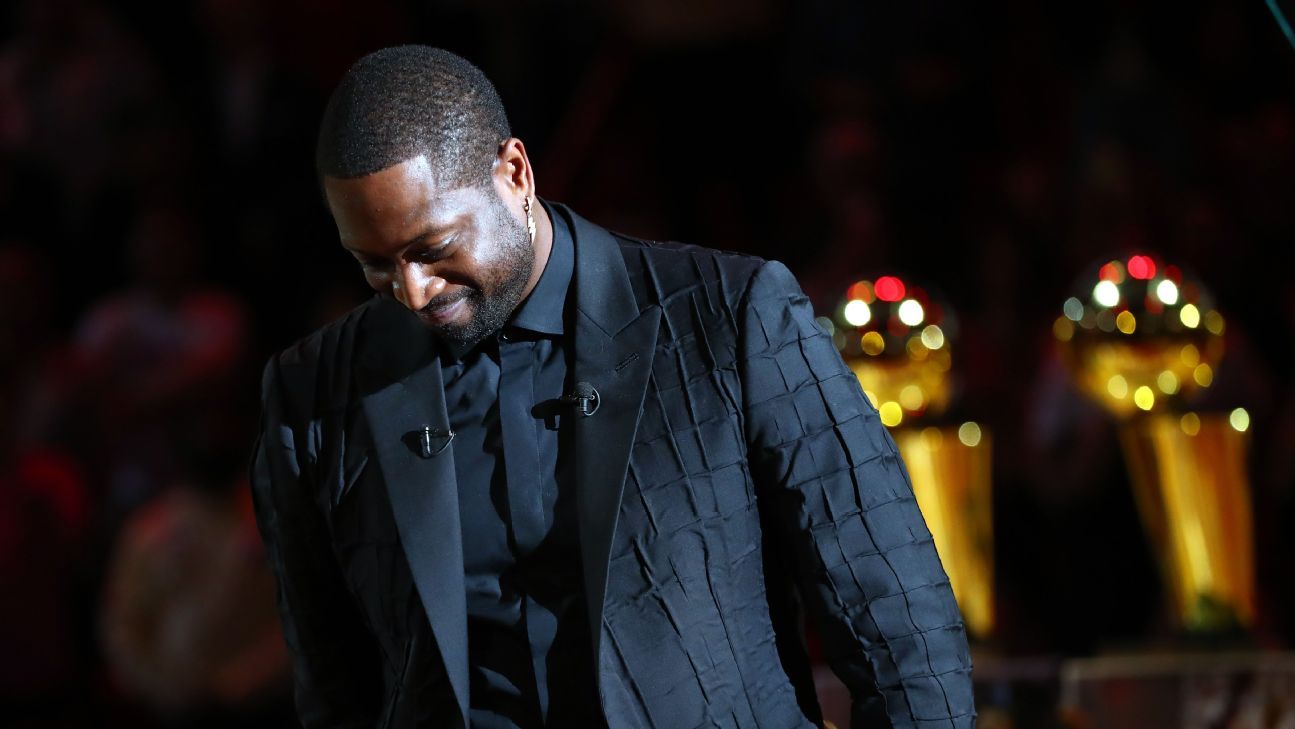 MIAMI — In the arena he made “his house” and the county nicknamed after him, Dwyane Wade starred up to the rafters with a wide grin as his No.3 jersey was lifted to its rightful place.

Suited in an all-black suit and shirt combination, Wade stood center-court at halftime and delivered a powerful, emotional speech. He gave thanks to his family, Pat Riley, Erik Spoelstra, his late agent Henry Thomas, Heat Nation and former teammates and coaches among others, but maybe his most impactful message came in his final words — which included a tribute to the late Kobe Bryant.

“Kobe said the most important thing is to try to inspire others so they can be great in whatever they try to do,” Wade recalled to a full Heat crowd on Saturday night. “I hope I inspired you. Thank you for making me a part of your legacy. Please know you’re a huge part of mine.”

After the ceremony he expanded about Bryant saying, “The impact that the passing of Kobe has done on myself and so many others is it’s made us sit down and stop. Life goes so fast. We move at a rapid pace. It’s made me enjoy the moment more. It’s made me want to create more memories. It definitely put a lot of things in perspective. As athletes, we’re looked at as superheroes. We looked at Kobe as a superhero. That moment has touched all of us and will continue to. Kobe was leading the way — he retired and showed us in his next act after retirement that you can master that as well. He mastered basketball, he mastered being an amazing father, he mastered being a husband, he mastered being a creator. He was showing us the way and now we don’t have that. So I do have a responsibility to be that guy and show the way for the next generation.”

In the midst of a three-night celebration of his career, Wade declared that after this weekend ends with the airing of his documentary, “D. Wade: Life Unexpected,” on ESPN on Sunday night that it marks the end of “basketball Dwyane Wade.”

As Wade walked onto the court for his jersey retirement ceremony, he turned to his oldest son Zaire and said: “This is it. I’m getting out of your way now.”

Wade was the fifth Heat player to have his jersey lifted into the rafters, but hearing American Airlines Arena erupt with cheers made it clear that Wade is second to no one in this city.

A three-time champion, a Finals MVP and a future first-ballot Hall of Fame, Wade is arguably the greatest athlete in South Florida history. But he resonated in this market because he was more than just an athlete. He felt human and superhuman at the same time.

“I hope their memories of me were of someone who gave everything he had on the basketball court, someone who was unselfish, someone who did it the right way, did it his way,” Wade said. “(Someone) who in the midst of doing it his way made sure he uplifted others, empowered others, brought others along the journey. When I came into this game, all I wanted was respect. I wanted respect for the way I play the game. You don’t know until it’s over if that respect is there. The last year and a half I felt that everything I tried to give the game, the game has given back to me. Hopefully it’s motivation and inspiration for so many kids and families out there.

On the court, the current Heat team did their best to impress Wade, setting a franchise record for most points (82) in a half in the opening two quarters Saturday evening. They led the Cleveland Cavaliers 82-52 at half, their first 30-point halftime lead since 2010, before cruising to a 124-105 win.

Heat president Pat Riley and Wade shared a special moment during the ceremony. Riley called Wade on stage ending with a passionate but succinct closing: “Dwyane, it’s all yours, my man. I love you.”

Then Wade proceeded to open his speech by claiming that Riley knew he had to draft Wade in the 2003 draft once the Marquette guard put up a triple-double against Riley’s Kentucky Wildcats in the Elite Eight.

Wade’s words with Spoelsta were also special as he spoke about early headbutting between the two strong personalities that later became a strong lifelong bond throughout the years. He talked about how much he appreciated that journey. Spoelsta spent a few moments Saturday evening before the game reminiscing about his time with Wade.

“It is the hardest thing you’ll ever do as a professional. To be able to commit to a team and take that journey all the way to the top. It takes special human beings to be able to connect and face adversity and overcome,” Spoelstra said. “We’re celebrating greatness and a legacy that will live on forever. That doesn’t just happen from being a good basketball player. You have to embody so many other characteristics.”

Wade said he got texts earlier Saturday from young stars like Donovan Mitchell and Devin Booker thanking him for paving the wave for them. He smiled. That’s part of his legacy.

“I’m most proud that I’ve inspired different generations to want to be better, to want to be greater, to want to do things they never thought they would,” Wade said. “My goal is to bring people with me and lift others up along the way. That’s legacy. When you’re able to change someone’s life and help their families have generational wealth. It’s not how many points I score or how many times I dunk the ball. That’s not legacy to me. Legacy to me is how much change I can create.”