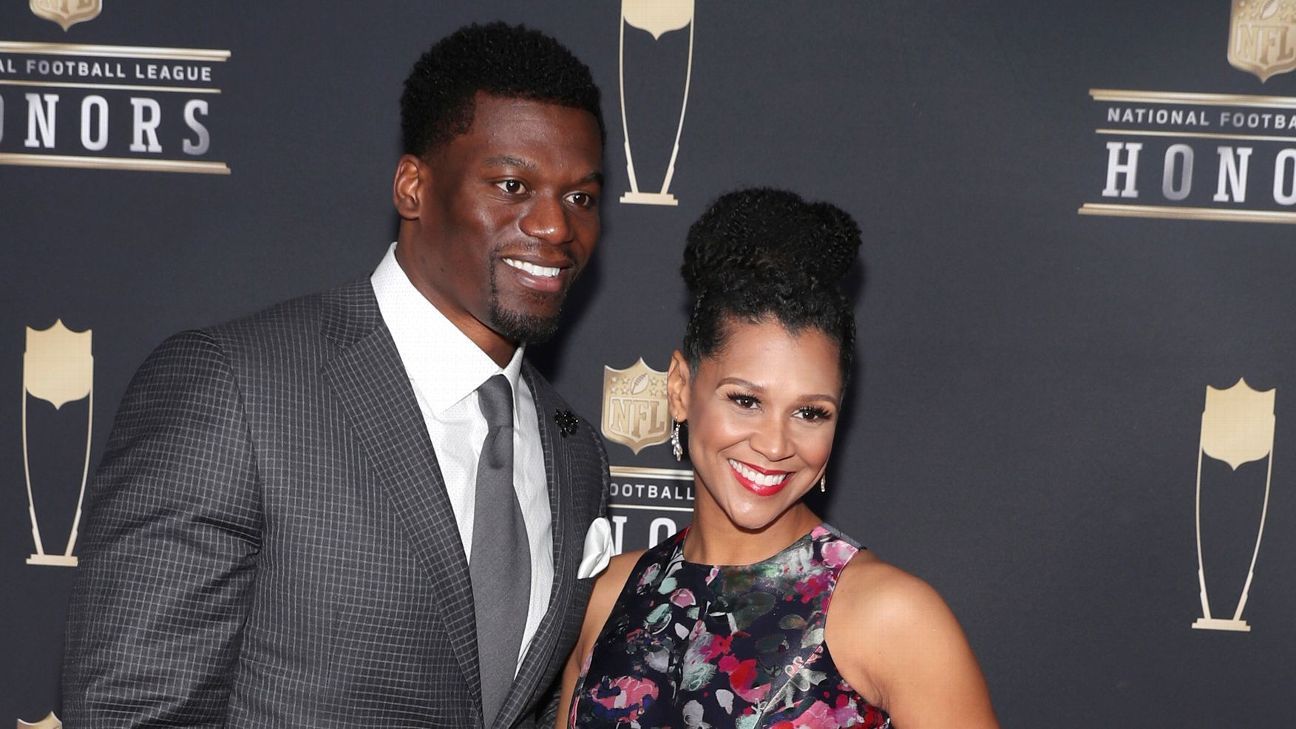 FOXBOROUGH, Mass. — Quick-hit thoughts and notes from around the NFL and the New England Patriots:

1. Watson hopes for agreement with owners in which players are true “partners”: As a vice president on the 11-member NFL Players Association executive committee, retiring Patriots tight end Ben Watson has been at the heart of the most important story surrounding professional football the past week — the possibility of ratifying an extension of the collective bargaining agreement that owners have already agreed upon.

Watson, 39, and his wife, Kirsten, have seven children and should be enjoying the start of his football retirement, but the suddenness of CBA talks in recent weeks has thrust him back into the business side of the game.

I asked him why he remains so invested, with his playing career in the rearview mirror, and what type of workload the recent surge of negotiations has sparked.

“Throughout the history of pro football, players have always come together for the betterment of the collective past, present and future. It is imperative that every player concern themselves with the issues that affect the business of football,” he explained. “Our player leadership, myself included, has spent countless hours discussing the future of our workplace on calls and in face-to-face meetings with each other and ownership.”

One of those meetings two weeks ago, in Los Angeles, had Watson returning to Boston on a red-eye flight.

Of his specific role on the executive committee, which voted 6-5 not to recommend the current CBA proposal to players, he said, “My job is to serve the membership by being a voice, as well as a conduit of information, and acting in the best interest of players. There are tough decisions that have to be made that are sometimes not in one’s best personal interest.

“But the examples of sacrifice set before us compel us to do the same. It has been quite a process and we are hopeful for a favorable outcome. The league refers to players as partners. My intention is to encourage an agreement that accurately reflects that sentiment.”

The NFL Players Association intends to hold a vote of its full body of players this week, a source told ESPN’s Dan Graziano.

Specific to the Patriots, the team’s player representative is longtime special-teams captain Matthew Slater, who is supported by co-alternates Ted Karras and Joe Cardona. As part of their roles, they communicate with players to keep them informed before any vote. They also can address areas of concerns that players have during the process.

Desmond Howard and Marcus Spears discuss whether a Patriots trade for Stefon Diggs would persuade Tom Brady to re-sign with the team.

2. How a new CBA might help Patriots in Brady talks: Prior to last August’s “extension” of Tom Brady’s contract, when the Patriots added two voidable years on his pact for salary-cap purposes, the team had never used voidable years in a contract during Bill Belichick’s coaching tenure. So it was a precedent-setting decision, and while there is no guarantee the team would do it again, it currently wouldn’t be an option regardless. Teams can’t put voidable years in contracts in the final year of a collective bargaining agreement, and 2020 is the final year of the existing CBA. So for Patriots followers asking the question “How would a new CBA affect the Patriots,” this is one definitive example. If a CBA extension is struck, it would open the possibility of the Patriots discussing another “extension” for Brady with voidable years, if there was indeed mutual interest in doing something similar to last August.

3. Culture could play a role in Brady’s decision: An entertaining interview with ESPN NFL Insider Jeff Darlington on Thursday’s Golic and Wingo Show sparked a thought on what Brady might ultimately be wrestling with as it relates to his football future. “He loves the idea of going in and really creating and helping to impart a culture on an organization that maybe is not quite there yet,” Darlington said. That makes sense as a primary factor if Brady departs as a free agent. I also think something that tugs at Brady’s heart is the culture he’s helped create in New England over 20 years, and it won’t be easy for him to leave if the Patriots come to the negotiating table with emotion and the intention of keeping him. That last part, in my opinion, is the key, and it’s why the negotiating football is currently in the Patriots’ hands.

4. Cannon, Jackson, Shelton among Patriots switching agents: Veteran offensive tackle Marcus Cannon, third-year cornerback J.C. Jackson and sixth-year defensive tackle Danny Shelton have all switched agents this offseason, according to NFL Players Association documents. Cannon’s switch to Joby Branion and Eugene Lee seems to reflect that he intends to play a 10th NFL season despite some speculation that he might retire. Jackson and Shelton have both hooked on with veteran agent Drew Rosenhaus, with whom the Patriots have a history of making deals, for better (Rob Gronkowski) or worse (Antonio Brown). Such switches aren’t uncommon at this time of year, and there could be more to come. They are notable from a behind-the-scenes standpoint in that a reset button is hit on any prior contract talks.

5. Belichick created a buzz at Senior Bowl: Belichick’s presence in Mobile, Alabama, for Senior Bowl practices last month predictably generated some excitement and served as a reminder to prospects why being part of the game can be a great benefit. While some players skip it to protect against injuries, coaches like Belichick take note of who is there to compete. “It was different. Someone on the staff there said it had been 10 years since he had been to the Senior Bowl, which is an amazing run of them playing in the [conference] championship that many years,” said Senior Bowl executive director Jim Nagy. “He draws a crowd and got the fans down here buzzing. One day at practice, he spent the bulk of practice talking to [Alabama] Coach [Nick] Saban, which was great to see them on the Senior Bowl sideline together.”

6. Caserio, Belichick & Co. scheduled to attend combine this week: Belichick, as usual, is scheduled to attend the NFL combine this week. The big change for the event is a shift to prime time, with the first night featuring tight ends and receivers — two positions at which the Patriots could use a boost. ESPN NFL analyst Louis Riddick recently said, “If you need a wide receiver, there is zero doubt this is one of the best years to get one that I can remember in the past 20 seasons.” Meanwhile, ESPN draft analyst Mel Kiper said this week that he wouldn’t be surprised if five receivers went in the first round and as many as eight landed in the second round. The combine schedule:

7. Edelman a reminder that scouting doesn’t stop at combine: While the NFL descends on Indianapolis for the combine, and media coverage promises to be plentiful, the daily presence of receiver Julian Edelman at Gillette Stadium this offseason (he’s one of the few players using the facility regularly) serves up a reminder that it isn’t the be-all and end-all for prospects. Edelman, center David Andrews, fullback James Develin and safety Duron Harmon are a few Patriots who weren’t even invited to the combine.

8. Did You Know: Edelman is second in Patriots history with 599 receptions, behind only Wes Welker’s 672.

9. Patriots turn to “kicking whisperer” in Houston: The Patriots are adding University of Alabama special-teams analyst Joe Houston to their coaching staff, Bruce Feldman of The Athletic reported Friday, which continues the well-established pipeline between Belichick and Saban. When I learned more about Houston’s background — he was a former kicker at USC and a 2018 article in the Des Moines Register referred to him as the “kicking whisperer” — it was easy to see how Belichick would value his perspective. Veteran kicker Stephen Gostkowski is coming off left hip surgery and is entering the final year of his contract, so the Patriots — just as they were in 2006 when they drafted Gostkowski to replace Adam Vinatieri — are naturally going to keep their eyes open for his eventual heir apparent.

10. Seymour on meaning of Black History Month: One leftover from last week’s interview with former Patriots defensive tackle and two-time Pro Football Hall of Fame finalist Richard Seymour, on what February being observed as Black History Month means to him.

“I think for me, the essence of Black History Month and having an opportunity to do something I love to do, I recognize it’s a lot of people before me that paved the way. They bridge the gap so I wouldn’t have the same struggles they had,” he said.

“In terms of what I’m doing now, I just want to help bridge that gap as well, because I think about guys like Bill Russell, we’ve had many talks. Jim Brown. Kareem Abdul-Jabbar. For me, it’s all about reaching back. It’s bigger than yourself.

“I’ll say this too: Any time I do something like helping other guys out and giving them the blueprint, it’s also self-fulfillment. No matter what you’ve done, if you can help somebody else reach their goals, those are the types of things I think about. It’s not about talk, it’s about helping others.”