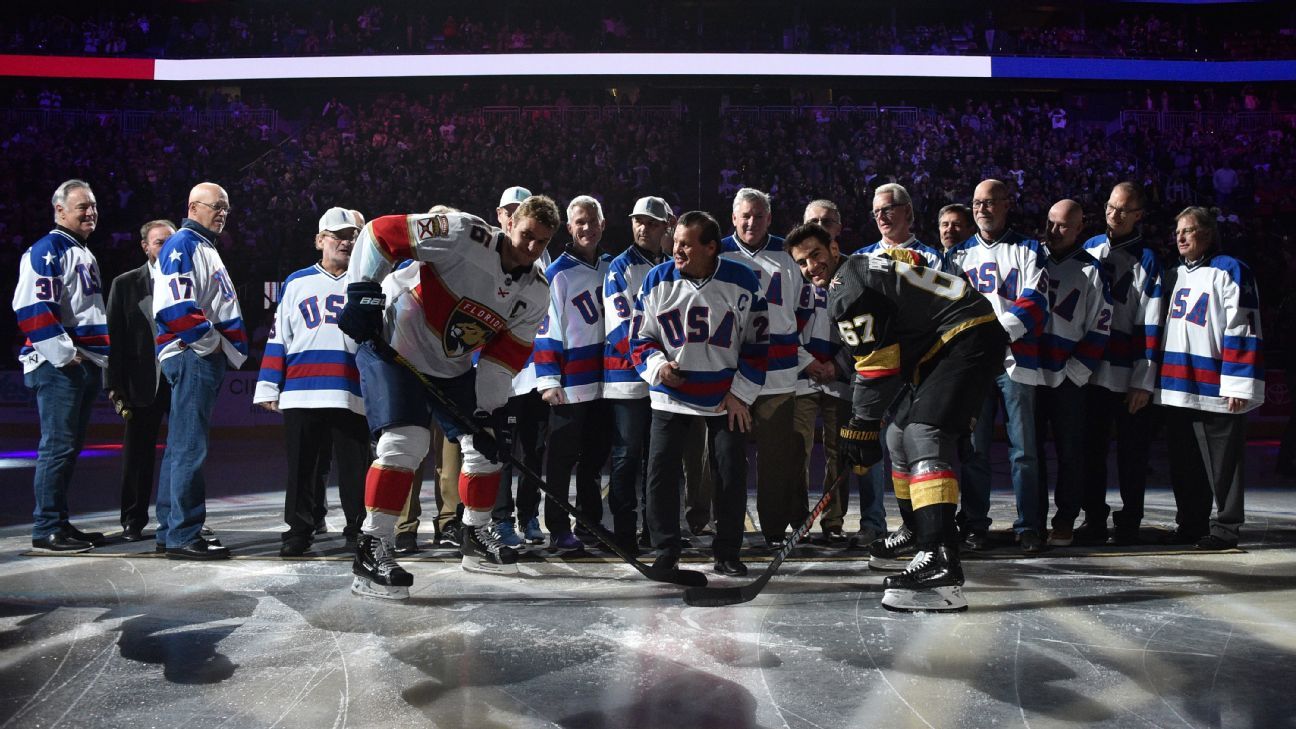 LAS VEGAS — Amidst a sports-filled weekend that included the heavyweight championship boxing match and a NASCAR race at Las Vegas Motor Speedway, hockey fans were reminded about believing in miracles on Saturday night.

Prior to the game between the Vegas Golden Knights and Florida Panthers, members of the 1980 U.S. Olympic team were honored, commemorating the 40th anniversary of the team’s epic run to the gold medal in Lake Placid, New York.

“I think as time has gone on I’ve had a greater appreciation for my good fortune that I had and to be able to make that team and how it all worked out and that I could be a part of that,” John Harrington said. “I think that as the years have gone on that it’s humbling to think that I was a part of that. I’m humbled because it’s still being talked about 40 years later and I was lucky enough to be a part of it.”

The only missing players were Mark Johnson, who is head coach of Wisconsin’s women’s hockey team, Bob Suter, who died in 2014, and forward Mark Pavelich, who was jailed last year on assault charges and ruled mentally incompetent to stand trial. Also missing was coach Herb Brooks, who was killed in a car accident in 2003.

The ceremony 40 years to the exact day veteran broadcaster Al Michaels asked the world, “Do you believe in miracles?” culminated a two-day celebration that included President Donald Trump introducing the team during a rally and a meet-and-greet with fans on Friday night.

“Relive the Miracle,” originally planned for UNLV’s Thomas and Mack Center on Saturday afternoon, was canceled due to poor ticket sales.

Saturday’s sellout crowd greeted Michaels and the former Olympians with enthusiasm and pride, providing them with a standing ovation and a thunderous “U-S-A!” chant as they exited the ice after Florida’s Aleksander Barkov and Vegas’ Max Pacioretty took the ceremonial opening puck from Team USA captain Mike Eruzione.

NHL Network analyst Brian Lawton, who became the first US-born hockey player drafted first overall in the NHL Entry Draft when he was taken in 1983 by the Minnesota North Stars, said although the league was not akin to American-born players back then, watching the U.S. team strike gold gave him a bolt of confidence he could play at the next level.

“You could count the number of first-round picks that were American on one hand back then,” said Lawton, who is still the only U.S. high school hockey player to be drafted first overall, and one of only eight Americans to be taken first overall. “It was Canada’s game and Canada only, and I felt that my first few years in the league. For me it was significantly important. I wasn’t a great player in the NHL, but obviously just by virtue of no one else having done it before -I was the first American ever pick first and all that stuff — in some small way hopefully helped other kids down the road.”

Golden Knights general manager Kelly McCrimmon said while it was a tremendous sports story — one that was chronicled in several films, most notably the 2004 motion picture “Miracle” — it was the opening puck drop for the evolution of ice hockey in the United States.

“It was the single most important event in the growth of hockey in the United States, McCrimmon said. “When you compare the landscape of U.S. players today with what it would have been at that time, it’s incredible how the sport has grown. I just think it was on the front end of tremendous growth in the sport in the U.S.”

Which New York staff is No. 1? Way-too-early 2023 MLB starting rotation rankings
Croke Park ruled out for Taylor bout over cost
Marcotti’s Musings: Man City’s nightmare weekend on and off the pitch
Let’s get this party started: Chiefs, Eagles arrive in Phoenix for Super Bowl
Potter confident Chelsea can still push for top 4