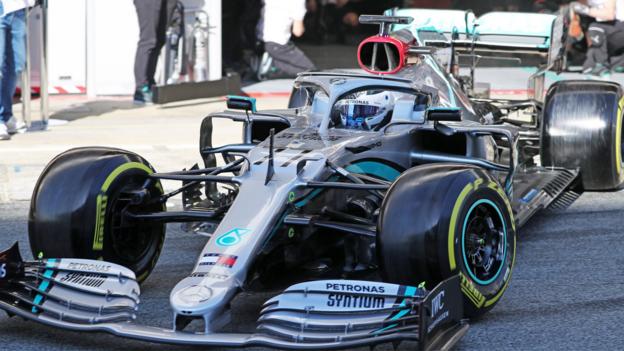 Technical director James Allison said they would start the season next month with improvements to the aerodynamics and engine.

The team had “a good winter” and produced a series of innovations to try to fend off challenges from rivals, he added.

“We decided we would make a car that was aggressive,” he said.

“Take every part and challenge ourselves to make it better.”

Allison used a video produced by Mercedes to detail three main areas of innovation on the car – but did not touch on the new ‘dual-axis steering’ system that surprised their rivals at last week’s first pre-season test.

“The temptation for us was just to keep polishing that one – after all it finished the season really strongly and it was developing very fast all the way through the year, so there was still lots of opportunity to make that one quicker.

“That conservative approach was very, very tempting. But in the end, we decided that wouldn’t be enough.”

He said the front and rear suspension changes had been “a structural compromise” that had added weight, but that this had been offset by changes elsewhere.

Allison said: “We have got a car here whose development slope has kicked up, is steeper than the one we finished last year with, in that very, very good car from 2019, and we’ve got a car that we hope will be fertile ground to develop strongly all the way through the 2020 season.”

Mercedes are aiming for a seventh consecutive drivers’ and constructors’ championship double this year, having set a new record of six in a row in 2019.

And driver Lewis Hamilton hopes to win a seventh world title, which would put him level with all-time record holder Michael Schumacher.

Mercedes drivers Valtteri Bottas and Hamilton set the fastest times at last week’s test. The second and final pre-season test runs from 26-28 February, and the first race is in Melbourne, Australia, on 13-15 March.