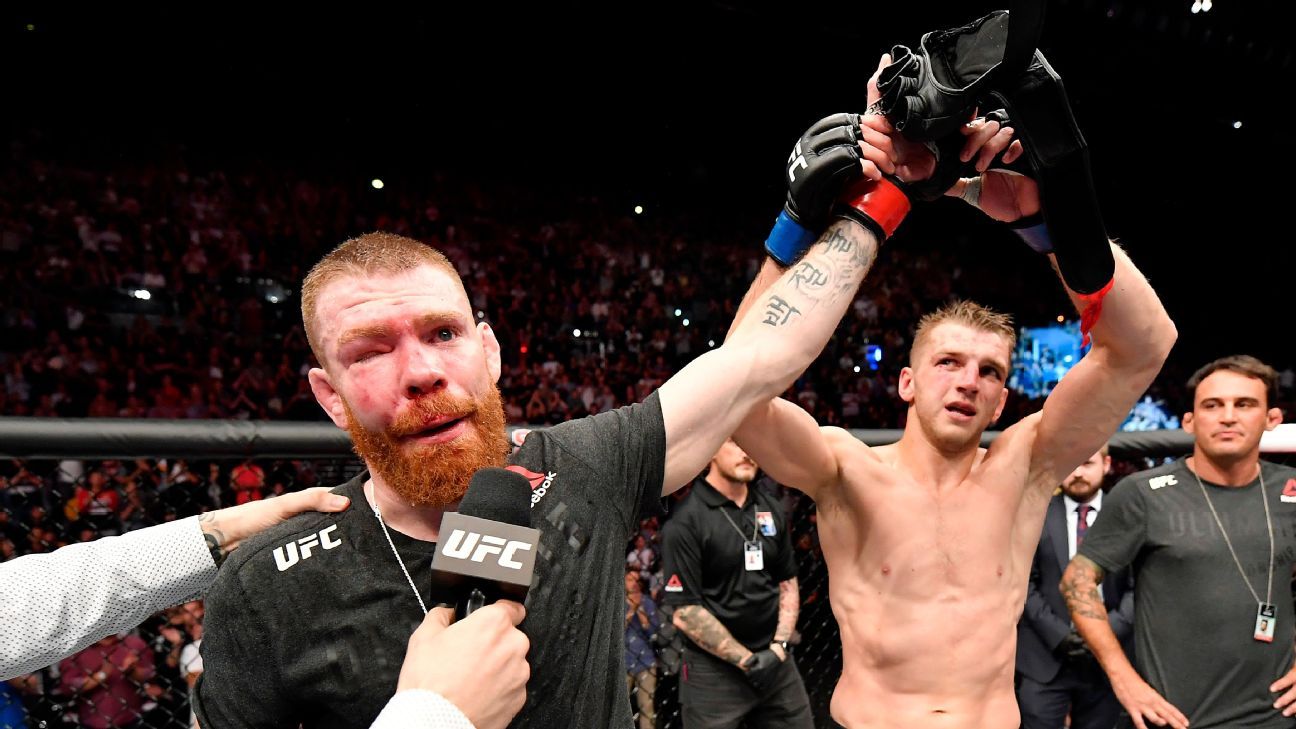 UFC Fight Night: Felder vs. Hooker delivered on the promise of an action-packed card, especially the main event, which featured Dan Hooker pulling out a split-decision victory over Paul Felder.

The animosity between the fighters was so intense during fight week that Hooker wouldn’t touch gloves with his opponent before the fight. But at the end of the five-round war, both fighters hugged each other out of respect for the action that just took place.

Felder and Hooker split the fight-of-the-night bonus, and they had to be taken to the hospital afterward.

Here are some of the key moments from a memorable night, including Felder flirting with the idea of retiring.

Felder was overcome with emotion after the decision was announced. It wasn’t so much because he lost, but the wear and tear of a brutal fight coupled with the sacrifices fighters make in training camp conspired to make him consider calling it a career.

“I knew it was close, I felt like I hurt him a lot in the fight but he got the takedowns, so he’s smart,” Felder said during the postfight interview with Dan Hardy. “He busted me up pretty good, and that might be it for me.”

The Spark Arena crowd, despite celebrating the win by hometown fighter Hooker, rallied behind Felder at that point, imploring him to reconsider his future plans.

“Man I got a four-year-old at home that misses me every time I go away like this. I don’t know,” Felder added through tears.

Hooker, too, sensed the gravity of Felder’s comments and walked across the Octagon to shake his opponent’s hand once more.

“Congratulations to Dan, I knew that this is this was exactly what I was in for when I came up here to New Zealand,” Felder said. “I pissed this guy off and when you piss off a talented guy like Dan he’s going to bring it to you. Man that was fun, brother, five rounds going at it.”

Felder has talked about going back into acting and currently does commentary for the UFC on ESPN, so he has options if he does follow through with the retirement talk. It’s possible the heat of battle prompted him to consider the end, but either way, he made his mark.

UFC middleweight champ Israel Adesanya and featherweight titleholder Alexander Volkanovski both hold camps at City Kickboxing, a 10-minute drive from Spark Arena. From the opening fight, the two were seated together in the first row, supporting three teammates on the card, something of a feat for Volkanovski.

He and his wife attended a wedding the previous night in Herekino, an area in the Northland Region of New Zealand that’s a five-hour drive from downtown Auckland. Volkanovski set a 3:30 a.m. alarm to make it back for the 10 a.m. local start time.

“That’s just how it is with my team: a true team, a true family,” said Eugene Bareman, head coach at City Kickboxing. “People will go the extra mile for each other, and that’s just the culture that we have.”

Added flyweight Kai Kara-France: “That’s just the kind of mentality and the kind of family environment we have at our gym. I’d do the same thing for him or any guy at our gym. If they need me there and want my support, I’ll be there without any question.”

Throughout fight week, the spotlight has been fixed on CKB, with this very much a hometown event following unmatched success in 2019. The trio on this card — Kara-France, Brad Riddell and Dan Hooker, in the main event — all came away with decision wins.

“This is what we work tirelessly for,” Bareman said. “This is our lives. This is what we dedicate every spare second that we have to. These results are exactly what we’re after, and I couldn’t be more over-the-moon.”

How Khabib scored it

After defeating Magomed Mustafaev by split decision in a hard-hitting battle in front of his hometown fans, Brad Riddell made a quick stop on the way from the Octagon to the locker room to celebrate by chugging a beer handed to him by one of those fans.

Angela Hill isn’t the only UFC fighter who receives phone calls from Mick Maynard, but lately she has been answering the call of the matchmaker more than anyone else.

“I feel like he’s calling people, they’re all saying no, I’m the only one that’s saying yes,” the 33-year-old strawweight said after her prelim victory over Loma Lookboonmee.

The unanimous-decision win was Hill’s sixth fight in a year. No one else in UFC history has done that. Not Donald “Cowboy” Cerrone. No one.

After three straight wins, what’s next for Hill?

Song Kenan had just performed with energy and excitement, knocking out Callan Potter in the first-round of their fast-twitch welterweight prelim. But in his postfight interview in the cage, the Chinese fighter was calm and softspoken as he explained how he had got the better of the Aussie.

Then he was asked about his difficult training camp, which started at the UFC Performance Institute in Beijing but had to be moved to Thailand after the outbreak of coronavirus in his native country. That changed his tone in an instant and Song’s voice turned emotional. His message, through a translator: “Stay strong, China! Stay strong, Wuhan!”

The first of three Auckland-based fighters on the card, Kara-France woke up Spark Arena with a walkout to “Poi E.” The iconic Māori-language song first topped charts in the early 1980s but has remained relevant in local pop culture.

“It’s not just my generation; it’s my dad’s generation,” Kara-France said. “They grew up hearing that song. It represents New Zealand and the native people of New Zealand, which I am: Māori. It’s embedded in our culture. I knew the crowd would feed off it.”

From the opening seconds until the unanimous decision was read, Kai-France regularly appealed to the crowd, raising his hand in their direction before, between and — at times — during rounds. Kara-France’s calls were met with stunning volume.

“It’s indescribable, really. I’ve never had that before in my career,” said Kara-France, who improved to 4-1 in the UFC. “It’s special for me. I’m doing it for the next generation, the kids that want to be in the UFC. There wasn’t a blueprint when I first started. Now there’s a blueprint of how to get into the UFC.

“This is my All Blacks jersey. I hold it with pride, and I’m extremely honored to do this and represent New Zealand.”