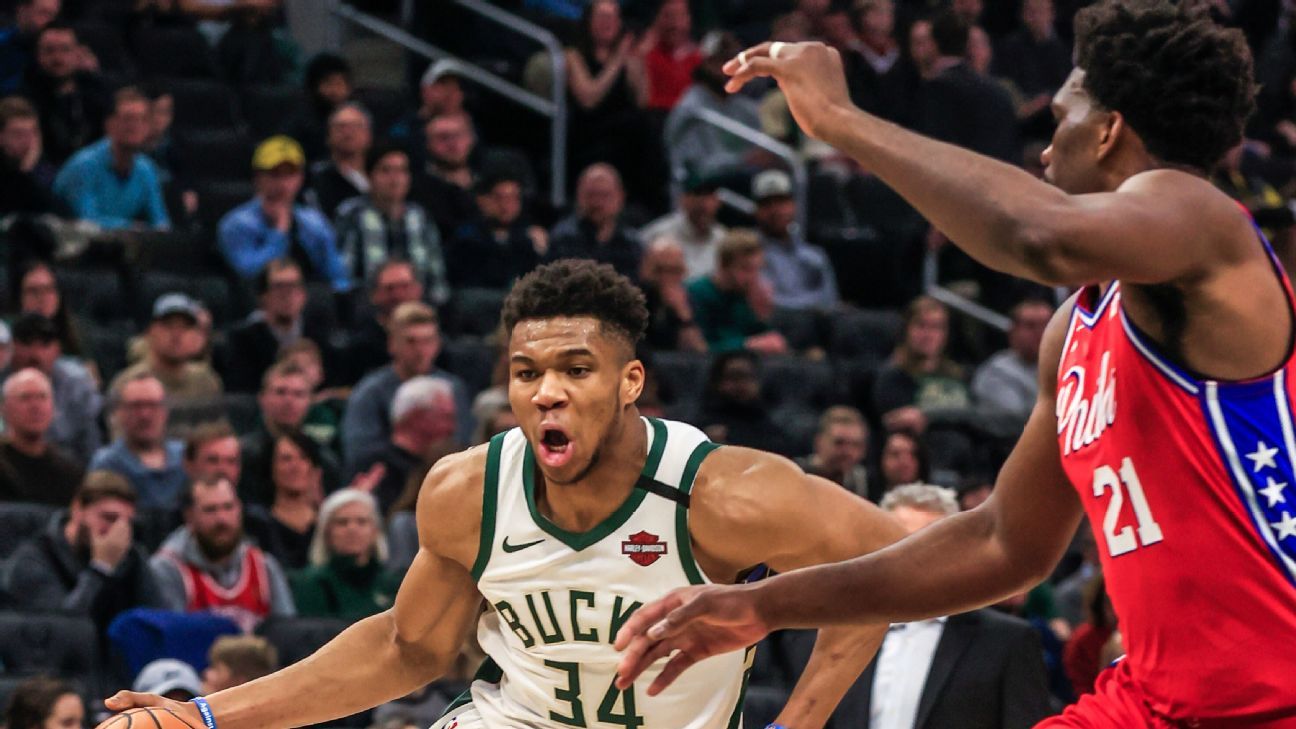 Once the sweaty, 6-foot-11 Milwaukee Bucks superstar wrapped up on the court, he hit the locker room for recovery with his legs stretched out in NormaTec recovery boots while studying film inside his stall next to Bucks assistant Ben Sullivan.

He then went on to display the same determination, focus and drive that he does every game while leading the Bucks to a 119-98 victory against All-Star big man Joel Embiid and the visiting Sixers in the midst of an historic start.

“Not trying to be selfish, because people confuse focusing on yourself and selfish as two different things,” said Antetokounmpo, who ended with 31 points on 12-17 shooting from the field, 17 rebounds and eight assists.

“I’m just trying to get better, because I know that my team wants me to be better and I know when getting better, I can help my team win easily, put them in the right spots easily. It just makes the game for my teammates a lot easier, so that’s my mindset,” Antetokounmpo continued. “We’ve got 26 more games until the playoffs. Just try to take as much of these 26 games, play good basketball, learn as much as possible, take notes, watch clips, so I can make my mind stronger and smarter — and that’s pretty much it.”

Just two nights earlier, Embiid declared himself the “best player in the world.” But Antetokounmpo was the clear-cut best player on the floor in their head-to-head matchup on Saturday as the Bucks improved to an NBA-best 48-8.

But Embiid struggled with efficiency on offense, making only 5-of-18 field goals and committing four turnovers. With Embiid as Antetokounmpo’s primary defender, Antetokounmpo went 5-for-8 from the field with 12 points — his best game of the season against Embiid’s defense.

Outside of Antetokounmpo’s 8 for 27 performance with 18 points on Christmas Day, he has averaged 39.2 points on 57% shooting in five other games versus Embiid’s 76ers under Bucks coach Mike Budenholzer, per ESPN Stats & Information research.

According to Second Spectrum data, Antetokounmpo made eight uncontested shots on Saturday, which is the most in a game in his career, regular season or playoffs. He made four field goals in the paint, two midrange and a pair of 3-pointers — including a trey at 10:14 in the fourth, which he followed up with a Stephen Curry-style shimmy celebration dance.

Milwaukee centers Brook Lopez and Robin Lopez drew the majority of the defensive assignments versus Embiid, which prompted Bucks guard Eric Bledsoe to declare Brook Lopez the “Defensive Player of the Year.”

But it was their MVP who proved to be the star among stars. Antetokounmpo’s 11 consecutive points out of halftime followed by a string of assists helped seal the win for Milwaukee, as they’ve now won 16 of their past 18 contests.

Antetokounmpo has established himself as the best scorer in the NBA in two facets: in the paint and on the fast break.

When it comes to scoring in the paint this season, Antetokounmpo leads the league with 17.9 interior points per game. He made 7 of 8 baskets in the paint on Saturday for 14 points.

Who is No. 1 in the latest NBA Basketball Power Index? Go to Ratings

On Saturday, that ultimately led to the Bucks earning their 18th 20-point win of the season. That is tied for the third most through 60 games in NBA history, according to research by ESPN Stats & Info.

“That’s what we want him to do,” fellow Bucks All-Star Khris Middleton said of Antetokounmpo. “We want him to play aggressive and prove that he’s the best player on the court every night, and we’re going to be right behind him backing him up.”