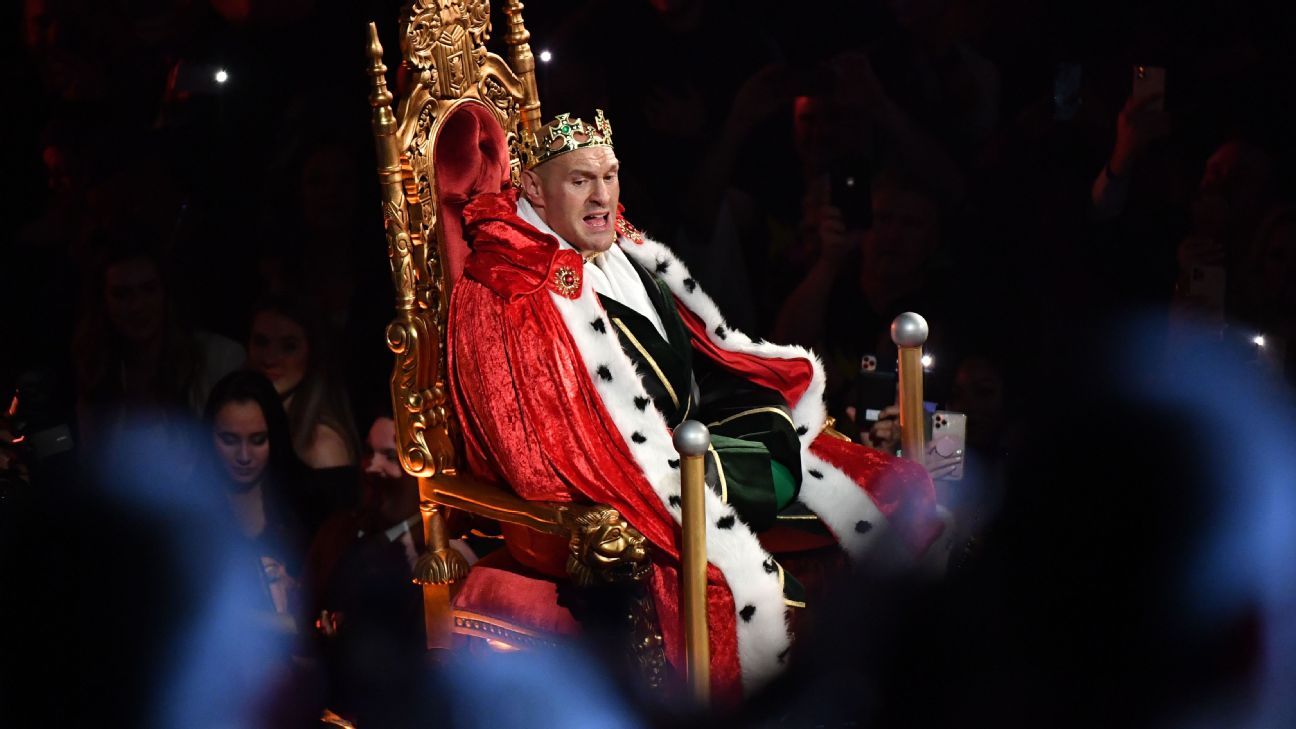 LAS VEGAS — Man’s most primitive endeavor came wrapped in the lavish and the absurd on Saturday night in Vegas. It was the biggest heavyweight fight in decades — a night the boxing folks hope is a prelude and not a throwback — and Tyson Fury owned every last inch of it.

Among the many slogans favored by his fans is this one: a king never makes a silent arrival. This fight, from Wednesday’s rowdy press conference to Friday’s clownish weigh-in to an impromptu post-fight concert, was big and loud and raucous.

The Gypsy King came into the ring on a motorized sedan chair, sitting on a throne, wearing a red robe and a gold crown, singing Patsy Cline’s “Crazy.” Fury throttled Deontay Wilder in every round before winning by TKO when Wilder’s corner threw in the towel in the seventh round. After the fight, he praised Wilder’s courage, said “The king has returned to the top of his throne,” and took the microphone to sing “American Pie.” He’s a pretty damned good singer, and the sellout crowd — at least half of the 15,816 seemed to have traveled from the United Kingdom to ransack Vegas — joined in the chorus. It was quite a moment, in a night and a weekend with many of them.

The big fights attract the fancy and important better than any event in sports, and this — a rematch between two undefeated giants who fought to a draw in December 2018 — was the biggest fight since Floyd Mayweather beat Manny Pacquiao in May 2015. For a sliver of the population, attending a fight like this one is not a luxury; it’s a necessity. To uphold social standing, you simply have to be there. Celebrities, athletes, a guy with a Mike Tyson tattoo who was not Mike Tyson, and the actual Mike Tyson, who signed autographs (minimum fee: $200) Saturday at a meet-and-greet inside a memorabilia shop in the MGM. The line was long at noon and longer at 5 p.m. (When Tyson finished his shift, the life-sized sign announcing his appearance was immediately swapped out for a new one: Pete Rose, tomorrow, noon to 5 p.m.) Gordon Ramsay, running down an escalator at a surprisingly brisk clip to avoid the rest of humanity. Patrick Mahomes. Jerry West, looking regal. Raiders coach Jon Gruden and owner Mark Davis sitting together ringside like brothers in their new city.

The fans from the UK, though, carried the night, and the buildup to it. The ushers tried to run Friday’s weigh-in like a wedding and steer fans to their respective sides. The idea is to avoid the fights that come with the cross-pollination, but the Fury dudes were more than willing to mix it up. Not to generalize, but his fanbase includes a lot of thick guys with shaved heads and prodigious appetites for beer. That combination can prove combustible, though it feels like there’d be more fights if fighting didn’t require putting down the beer.

And they were back strong before Saturday’s fight, singing loudly and intelligibly by 5:30, taking wild swings at whatever song happened to be playing over the speakers in a country-music bar between the casino and the arena. There was, somewhat unsettlingly, a squadron of preteen British boys in sportscoats and slacks, looking like they escaped from a harsh boarding school but had time to stop at a barber shop and all get the same haircut on their way out.

Their incessant “There’s one Tyson Fury” song made its way into the arena after the first round of the last undercard fight. If you’re not familiar, the song goes like this: “There’s one Tyson Fury.” That’s it, that’s the whole thing, so it tends to be delivered in quick bursts, like burps. They waited for “Sweet Caroline” — the more advanced of the two Fury-based songs, and far cooler — until it was blasted through the arena a few minutes before the national anthems.

Heavyweight fights are usually flares of violence trapped inside a lot of figuring things out. This one was not that way. Unlike the first fight, when Fury out-boxed Wilder but could only earn a draw after being knocked down twice, Fury came out aggressive and stayed that way. Wilder was never able to accurately unleash his right hand, his best — and maybe only — reliable weapon. That right hand is both real and existential, living in the minds of both fighters. Wilder holds it down by his hip, a little away from his body, like a warning, but on this night he was reduced to using it to flail and hope.

Wilder was disappointed in his corner’s decision to stop the fight, as was his coach Jay Deas, who both referenced the idea of “going out on your sword.” In truth, case could have been made for referee Kenny Bayless to stop it far sooner. Wilder hit the canvas like a sack of flour twice, and his balance was clearly affected by a shot to his left ear that had him bleeding and listing to his left over the last few rounds. When the bell rang to end the third round, he stood in the middle of the ring, frozen in his stance, as if he never heard it. To survive into the seventh, he grabbed the ropes, hugged onto Fury and generally did whatever he could to remain on his feet. That he managed to do it for as long as he did was a stout achievement.

“I’m my own worst critic,” Fury said in the post-fight press conference. “But even I will say that was a fantastic performance.”

Fury looks like a child’s version of an old man, and yet he does everything that seems impossible for a body that’s 6-foot-9 and 273 pounds. At one point he chased Wilder across the ring — there was actually a lot of that — and took a backhanded swing that somehow connected. He’s a giant who fights like a point guard.

He also runs afoul of the first rule of boxing: show no weakness. He’s open about his battles with depression and substance abuse. He’s vulnerable and raw, which can be misconstrued as unfocused and unserious. He laughed about Wilder’s suggestion that he can’t punch, calling himself, “Old pillow fist, can’t crack an egg.” He comes by his nickname organically. The Gypsy King is an Irish Traveler, a group known in Ireland as “The Walking People,” and he lyrically — if not grammatically correctly — says he’s fighting for “all the people who don’t think there’s no hope no more.”

They all seemed to show up Saturday night in Vegas: the hopeful and the previously hopeless. They traveled a long way to sing and chant and drink, and the new WBC and lineal heavyweight champion made it worth their while. And when it was over, they took it out into the streets and back into the bars, singing and chanting, their joy too big to remain inside. It’s a safe bet Fury wasn’t far behind.

There is, after all, only one Tyson Fury.