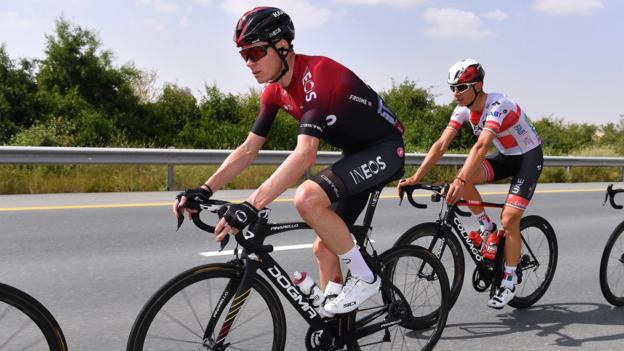 Chris Froome enjoyed a safe passage through stage one of the UAE Tour on his return to competitive cycling.

The four-time Tour de France winner was back racing for the first time since breaking his leg at the Criterium du Dauphine in June last year.

“It feels good to be a bike racer again,” said Froome, 34, after coming home in the peloton on a day set up for the sprinters.

The 148km opening stage in Dubai was won by German Pascal Ackermann.

The Bora-Hansgrohe rider finished ahead of Caleb Ewan of Australia and Frenchman Rudy Barbier.

“All of the big names are here. I wasn’t sure if my form was good enough but it proved to be,” said Ackermann, the points winner at last year’s Giro d’Italia.

Ackermann claimed a 10-second time bonus for winning and leads Ewan by four seconds overall, with Serbia’s Veljko Stojnic a second further back in third after taking a five-second bonus for winning the intermediate sprint.