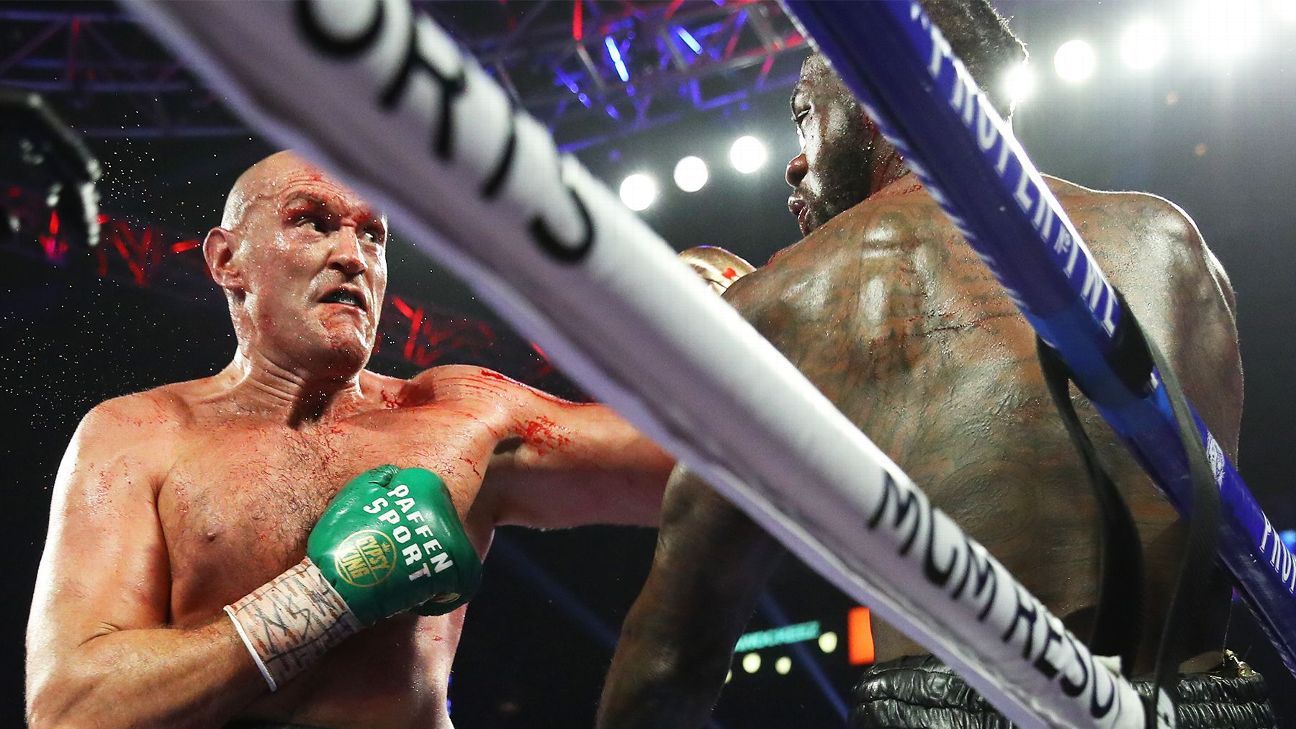 LAS VEGAS — Tyson Fury left no doubt about who the heavyweight king of boxing is, as he thoroughly dismantled Deontay Wilder on Saturday in a highly anticipated rematch of their 2018 split draw. Fury decisively won the bout via TKO in the seventh round after Wilder’s corner threw in the towel.

Prior to the fight, Fury (30-0-1, 21 KOs) promised he would go after Wilder (42-1-1, 41 KOs), which is exactly what he did. The result promises to have a major impact on heavyweight boxing, and the sport in general. And it’s the kind of performance that should raise Fury’s star power exponentially.

ESPN analysts and former world titlists Timothy Bradley and Andre Ward reflect on the night and examine how Fury got the job done.

What was the most surprising thing to you about this fight?

Ward: It’s tough, because I was surprised how the fight went — but then I wasn’t. When I initially heard Tyson Fury say in an interview he was going to attack Deontay, I didn’t believe it. Then I kept hearing it and kept hearing it, and I started to believe it a little more.

Fury was right. You don’t always have to move away from a puncher. Sometimes you have to attack a guy who is not used to being attacked. You have to have the audacity, courage and willingness to attack him, and do the one thing people refuse to do against a guy to see what he does about it. That’s what Tyson Fury did.

If you as a fighter have that thing in you, and you’re willing to rattle the cage of another man in the division like that, all you need is the right coach to build the strategy — and that coach was SugarHill Steward. It was a perfect match between Fury and SugarHill for this fight.

Bradley: Actually seeing Tyson Fury do exactly what he said he was gonna do. And he did it better than I ever thought he would. He applied pressure from the opening bell, but he did it smart. He beat Deontay Wilder with his own best punch, the 1-2. That’s his combination.

He was mauling Wilder on the inside. He put on a fantastic, unprecedented performance. I’ve never seen something like him at heavyweight — 6-foot-9 — I want to call him the modern-day Muhammad Ali. He has the goods.

Wilder has the right to demand a third fight. Should he? Would you?

Ward: I’m on the outside looking in right now. I don’t feel the pain Wilder feels. My ego isn’t bruised and my reputation isn’t temporarily shattered. I’m speaking with a clear head. I don’t think he should take a third fight. And I don’t think he will.

I’ve seen this movie before. I’ve seen a puncher, and not just any puncher, but a guy who has built his whole reputation on one thing. That is fear, intimidation and knockout power in one hand — I’ve seen these guys get undressed time and time again. Every puncher has this day, and today was Wilder’s day. And when these guys have their day, psychologically, they are shattered. That doesn’t mean Wilder can’t come back and win fights, but I just don’t think he can come back and win fights against this guy, Fury.

Now, I believe I would exercise the trilogy clause, because my reputation would be shattered. I would want to right that wrong, and I don’t know if I would allow myself to be swayed on that. You’re gonna have to do that to me twice, because I’m exercising the rematch. Period. I just don’t think he should, though.

Bradley: Absolutely, I would. I’ve got too much pride. I know Wilder got stopped tonight. He got beat down. But having that pride, I know what it feels like. It will fuel him to get back to the drawing board and learn how to box the right way. I think he’s going to want to exercise that rematch clause and get his belts back.

If I were advising him, I would tell him, “We’re going to pass on the rematch right away.” After the first fight [in December 2018], Tyson Fury waited. He signed with ESPN and made it a little tougher to negotiate. It happened two years later, but it happened. Why can’t Wilder do the same thing? Get a couple fights, get your confidence back. Add to your craft, and then come back and face those demons.

Physically, taking those punches can destroy you. Mentally, losing your “0,” it’s tough. But you can get that back over time.

How does this fight affect each of their legacies?

Ward: It’s going to affect Wilder’s legacy because he lost, and lost by knockout. That stain will always be there. He’s got a one next to all those victories now. But overall, you can’t knock Deontay Wilder. We ask these guys to fight the best.

Well, everybody can’t win. There has to be a loser, and that’s why a lot of guys don’t fight the best. I give a lot of respect to both guys, especially Wilder just for taking the risk. Both of those things will be weighed when looking at his career.

And Fury, his legacy continues. He doesn’t have a lot of great names on his record. He’s really got two [Wilder and Wladimir Klitschko], and in those fights he showed up every time. He’s a guy who rises to the occasion. Some guys can rise and some can’t. That guy rises.

Bradley: For Wilder, he was trying to pass Muhammad Ali in title defenses. He doesn’t get that claim now. For Fury, he has captured the WBC title. He’s on top of the world. He beat the baddest man on the planet, who everybody feared. This boosts his legacy a lot, definitely. I can’t put him just yet with the top, top heavyweights of all time, but right now, Fury is the baddest big man on the planet. Skills-wise, there’s no ceiling for him. He is the Terence Crawford of the heavyweight division.

I don’t see anybody beating him. And if Wilder does exercise the rematch, I think he’ll get stopped sooner. Fury might get him in the second round.

Will Tyson Fury fight Anthony Joshua? And what would that fight look like?

Ward: I asked Fury that question this week, and I didn’t really understand the response. It’s almost like he’s given up on it. He said, “I tried calling the guy out and he won’t.” I don’t know the history well enough to understand his response, but you’d think his next focus would be Joshua, either in Las Vegas or the U.K.

I would want to get those other belts. But first things first — we’ll see if Wilder wants to try to right that wrong. I said it before the fight, this was for first and second place. I have Joshua as the third-best heavyweight in the world, and I don’t think Joshua can beat Fury. I don’t think anyone can.

Bradley: Joshua has the British fans and Fury has the British and U.S. fans. Would Joshua come over here? This is where Fury wants to fight. The business can be difficult, but I wouldn’t mind seeing it.

Styles make fights. Joshua is no slouch. I know Joshua suffered a defeat against Andy Ruiz Jr., but that was a smaller guy. Sometimes smaller guys can get underneath you and if they’re quick, they can cause havoc. You saw Joshua come back and fight with the right game plan the second time, and totally against what he believed in before. That shows me he has adapted. If he needs to box, he can box and he can also fight. And he has the punching power to back it up.

I still think Fury would beat him, because Fury can do it all. And there’s a blueprint out on Joshua. That’s the left hook and pressure. When you pressure Joshua and take his space away, he doesn’t like it. I think Fury would cut off the ring, attack the body, use his jab, set him up. I feel Fury could possibly stop him.