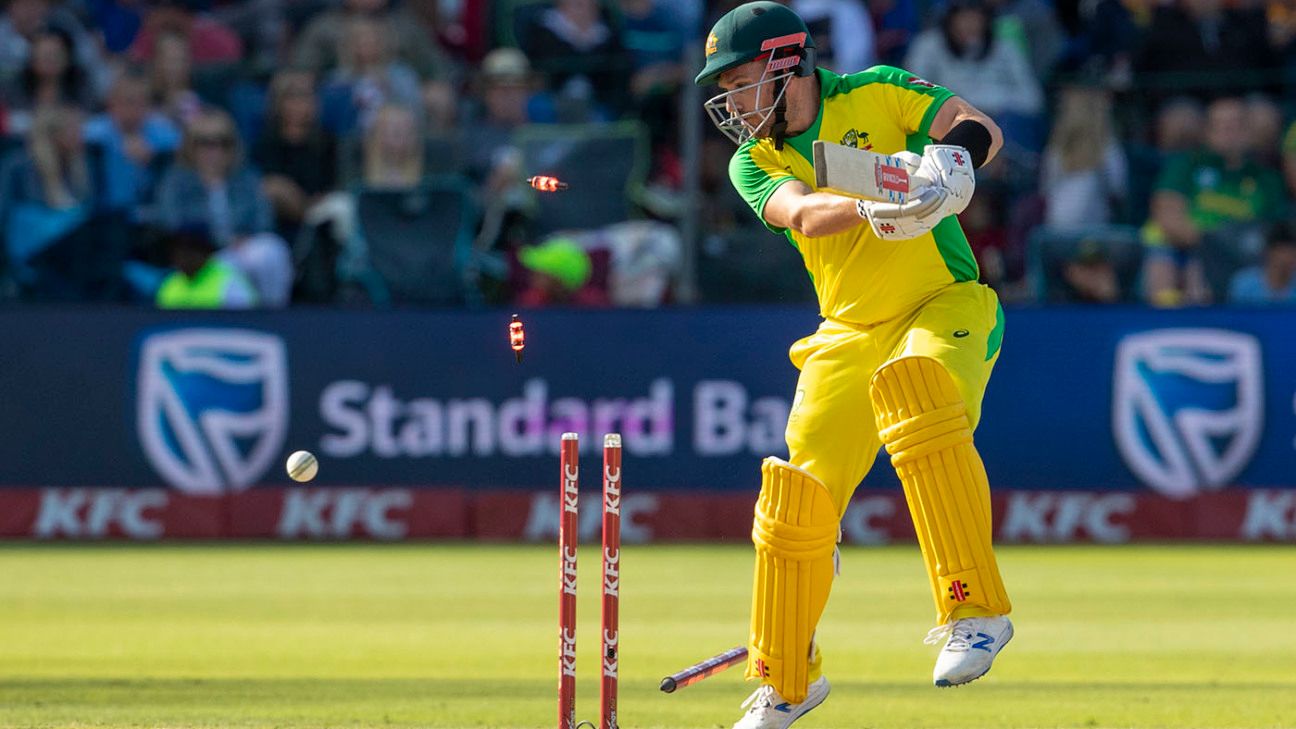 While South Africans celebrate their double success in T20 cricket on a super Sunday in which both the men’s and women’s teams won crucial matches, Australia are not making any attempt to hide their disappointment that victory could have been theirs.

Their men’s team lost a T20 for the first time since November 2018, ending a nine-match unbeaten run and thus squandered the chance to seal the series against South Africa in a tense tussle.

Chasing 159, Australia were fell 12 runs short, after putting themselves in a position from which assistant coach Andrew McDonald felt they could have won.

“We got the game into a situation, where even though [Tabraiz Shamsi] bowled four overs for 17, we could have won it,” he said. “The players will feel it is a missed opportunity to win a series away from home which is always a huge accomplishment.”

Shamsi was the most economical bowler in the match, bowling a tight middle-overs spell to keep the required rate rising, but was bowled out by the 14th over of Australia’s innings. Then, they needed 50 runs off the 36 balls to win but Anrich Nortje, Lungi Ngidi and Kagiso Rabada denied them.

Ngidi’s third over, which went for 11 runs but included the wicket of Alex Carey, and Rabada’s last two overs, which cost a combined 10 runs and saw Matthew Wade dismissed, did the trick for South Africa and helped restore some of their confidence after they suffered their biggest T20I defeat less than 48 hours before. Ngidi admitted it has been tough for the home attack, especially after they also failed to defend a total against England immediately before this series and coach Mark Boucher said their skills were not up to scratch.

“It’s been a very difficult build-up for us. There’s been a lot of situations where we have been tested at the death,” Ngidi said. “The chats have been to have confidence in the skills that we have. We have done it before so it’s to go out there and have trust in our skills. We saw in our innings, we had gotten off to a flier and they also bowled very well at the death. We saw that if we can hit our straps with our death bowling it’s going to be a tight game and we saw in the end, it was.”

Rabada was significantly improved from his effort at the Wanderers on Friday, where he took 0 for 45 in three overs, and Ngidi recovered from conceding 36 runs in his first three overs, which included 12 in his first three legitimate deliveries, to giving away only five in his final one. The trust he spoke about shone through as he kept himself in the fight until the end.

“You’ve got 24 balls to bowl and the first over doesn’t determine whether you have won or lost the game,” he said. “There were a few unfortunate boundaries that I went for that could have helped if those hadn’t gone but I knew there is still an opportunity to win the game. I just wanted to try and take as many wickets as I could.”

Ngidi probably knows that he can’t claim all the credit for his last wicket, which was the result of superb fielding from former captain Faf du Plessis. Stationed at long-on, du Plessis parried a Mitchell Marsh shot that was destined for six back into the playing area for David Miller to complete the catch in the third instance of a ball being saved from sailing over the boundary in the match. The other two efforts were from Steve Smith, who saved sixes when South Africa were batting and McDonald had nothing but praise for both teams’ showing in the field.

“The game gets better every day and fielding becomes a spectacle. It was fantastic. The cutting of angles and the speed, the athleticism of the modern-day player is outstanding and they never cease to amaze,” McDonald said. “They do practise it and they put themselves in those scenarios in training. It’s no fluke they are able to execute that in my match. These guys have got creative minds and they’ve added in different shots over time and fielding is no different.”

But for Wednesday’s decider, Australia’s focus will shift to their middle order, where they are still experimenting with No. 4 and No. 5 as they prepare for the T20 World Cup. “We’ve locked in Finch and Warner at the top and Steve Smith, I dare say he won’t be moving but we are flexible on No. 4 and 5,” McDonald said.

“Exposure to those situations more often grows experience and with experience comes the ability to execute and today we didn’t quite get that right. We saw at the Wanderers they had some work to do and they were able to do it batting first. Batting second on a tiring wicket is a different situation so they will be no doubt better for that experience.”

Perkins’ 32 powers Iowa past Illinois in thriller
Arbitration for Braves, Cy Young runner-up Fried
‘Mate, we can do it. I have full faith in ourselves’
BBL final: Peirson hopes a ‘short turnaround is the best thing’ for Heat against runaway favourites Scorchers
Ballance 137*, Mavuta 53 help Zimbabwe fight back before sporting declaration