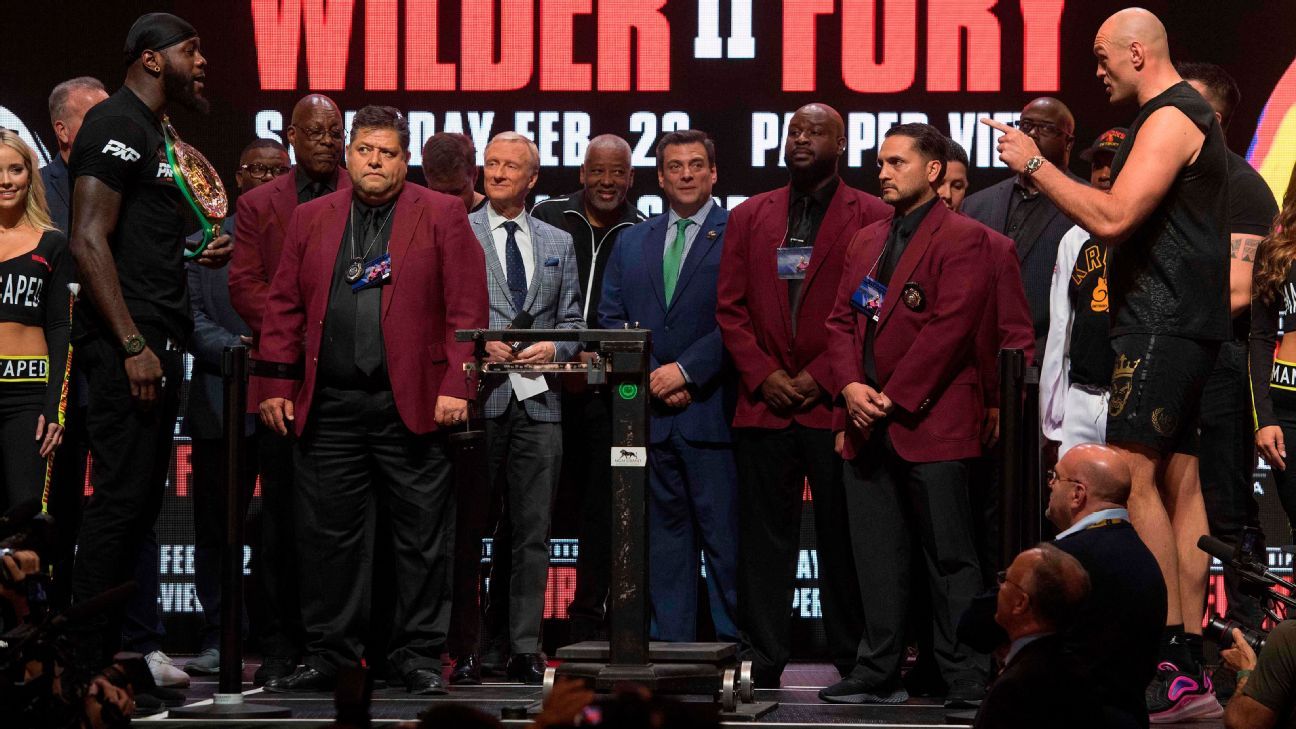 LAS VEGAS — Hoping to avoid a repeat of the pushing and shoving that took place between heavyweight world titleholder Deontay Wilder and lineal champion Tyson Fury at their final prefight news conference on Wednesday, the Nevada State Athletic Commission mandated that the big men would not be permitted to face off for the traditional photo following their weigh-in Friday.

So even though the fighters were kept apart by about 10 feet on a long stage, the rollicking crowd at the MGM Grand Garden Arena cheered, sang and partied in anticipation of perhaps the biggest heavyweight championship fight since Lennox Lewis retained the title in his long-awaited showdown against Mike Tyson in 2002.

Fury and Wilder made separate walks through the floor of the arena to music and the wild cheers of their fans before hitting the scale ahead of the heavily anticipated rematch, also inside the MGM Grand Garden Arena, on Saturday (ESPN-Fox PPV, 9 p.m. ET).

Fury weighed in first and was a solid 273 pounds, the third heaviest of his career. He weighed 276 for his return from a 31-month layoff against Sefer Seferi in June 2018 and was 274 for a 2014 bout against Joey Abell.

Fury had been telling everyone who would listen that he intended to weigh about 270 pounds with the intent of using the added bulk in an effort to go for a knockout rather than coming in closer to the 256.5 pounds he weighed for the first fight and using his superb skills and speed that enabled him to outbox Wilder for long stretches 14 months ago, although Wilder scored knockdowns in the ninth and 12th rounds that Fury somehow survived.

“I’ve been holding that weight for the last three months in training camp,” said Fury, who will be defending the lineal crown for the sixth time. “I’ve been sparring every day with it, training every day, so weight is not a problem — 273 pounds of pure British beef. It’s no secret. I’m looking for a knockout of Deontay Wilder.”

Wilder was the heaviest of his career at a ripped 231 pounds. He had been as heavy as 229 for two previous fights, his first title defense against Eric Molina in 2015 and for a 2012 win over Damon McCreary.

Wilder, who was 212.5 pounds for the first fight with Fury — because he was ill in the days leading up to the bout — downplayed his weight gain.

“At the end of the day, we’re heavyweights, so it really doesn’t matter about the weight,” said Wilder, who will be making the 11th defense of his belt. “As you can see throughout my whole career, I’ve been underweight. I probably outweighed my opponent maybe four times in my career. So I really don’t care about weight. This just indicates that I’m in a better state and a better mind than the last time, and I’ve come for the pain.”

For the rematch, Fury parted ways with trainer Ben Davison to work with Javan “Sugar” Hill.

After Wilder and Fury stepped off the scale, they took positions on opposite sides of the stage with six NSAC inspectors on hand to make sure they didn’t get too close to each other.

Though Wilder and Fury, who fought to an exciting and controversial split draw in December 2018 in Los Angeles, did not go nose to nose as fighters typically would at a weigh-in, they nonetheless spent the next few minutes pointing and yelling at each other. At one point Fury flipped Wilder his middle finger and Wilder appeared to respond by grabbing his crotch.

Fury added, “All my fans are here! We are ready for a war!”

Also, former heavyweight titlist Charles Martin (27-2-1, 24 KOs), a 33-year-old southpaw fighting out of Las Vegas, weighed 254 pounds and former world title challenger Gerald Washington (20-3-1, 13 KOs), 37, of Vallejo, California, was 236 pounds for their title elimination fight that is the co-feature on the pay-per-view.