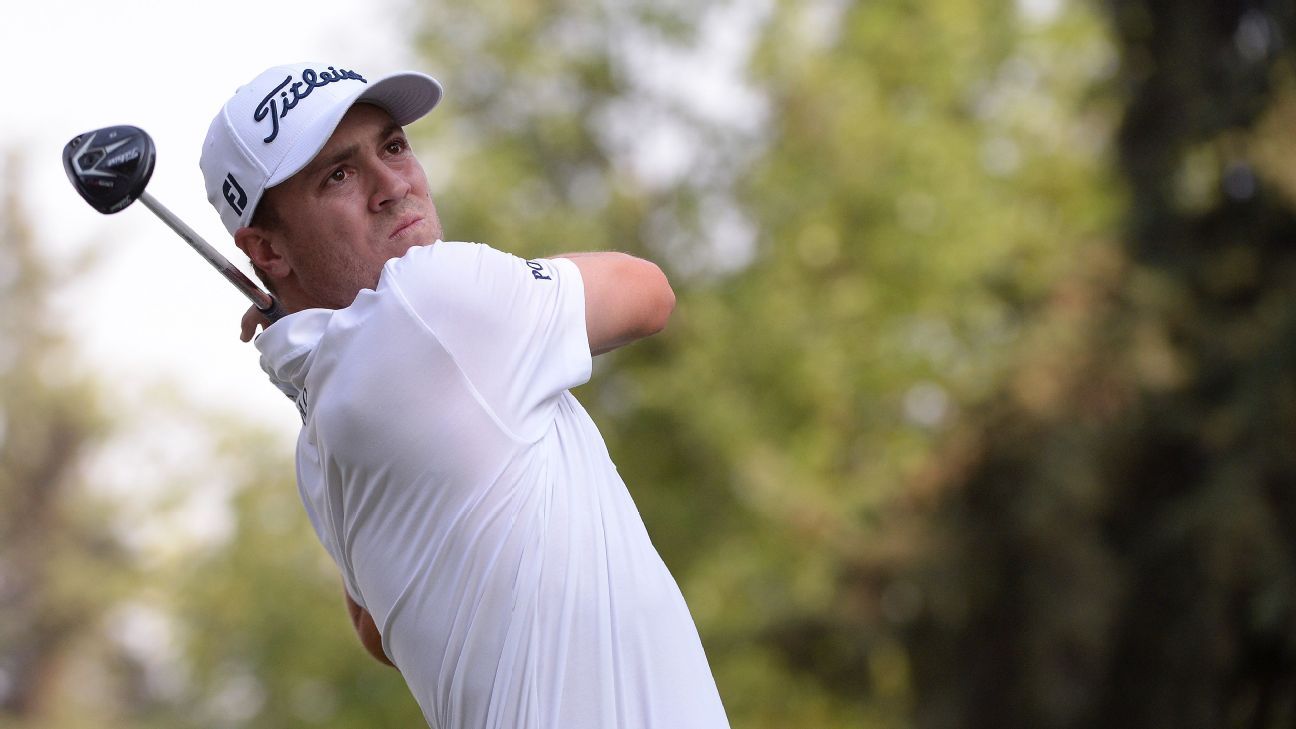 MEXICO CITY — Justin Thomas has done just about everything at the Mexico Championship except win.

Even with a one-shot lead going into the final round, Saturday was enough of a reminder that no lead is safe at Chapultepec Golf Club and nothing comes easily.

Thomas was five shots behind while playing the par-5 sixth hole. He was three shots ahead when he walked off the 15th green after a two-putt birdie. He wound up with a 6-under 65 — bogeys at the start and finish of his round, eight birdies and solid golf in between.

Patrick Reed also made bogey on the 18th hole for a 67 that cost him a share of the lead, while Erik van Rooyen of South Africa chipped in for the fourth time this week and posted a 67. They were one shot behind.

Jon Rahm, 3 over through his opening eight holes of this World Golf Championship, started the third round 10 shots out of the lead and wound up in the penultimate group, four shots behind. He opened with six birdies in seven holes. He made a hole-in-one on the 17th. And he shot 61 to break the course record and his own record as a pro.

Sunday in Mexico City will be no time for a siesta.

“I’ve been close a couple of times,” Thomas said. “I definitely feel like I have a little bit of unfinished business here. There’s a lot of great players that are going to be breathing down Patrick and I and everybody’s necks. I know I need to play well tomorrow. But I know I want it.”

Thomas, who’s at 15-under 198, seeks his third victory this season.

Six players were within four shots of the lead. That group included Rory McIlroy and Bryson DeChambeau, both of whom lost ground, one more than the other.

McIlroy was one shot behind when he ripped a 410-yard drive in the altitude of Mexico City to 30 feet on the par-4 12th. But he missed a 6-foot par putt on the 14th and didn’t make a birdie coming in. That gave him a 68.

DeChambeau led by three early in the round and still was tied on the back nine when he made three bogeys over the last five holes — one of his pars was a three-putt on the par-5 15th — and had to settle for a 71.

Rahm was dynamic as ever. Four of his six birdies at the start were inside 4 feet. He added three birdies on the back nine and then his gap wedge on the par-3 17th took one big hop and disappeared into the cup for an ace.

“With the start I had today, the only thing in mind was trying to get as close as possible to the leaders,” Rahm said. “I’m just really happy that after the first two days I’m going to have a legitimate chance tomorrow without needing to shoot 59 or something like that.”

Even so, it starts with Thomas.

He was the 54-hole leader in 2017, the first year in Mexico City, only to shoot 72 in the final round as Dustin Johnson pulled away to win. The following year, Thomas holed out for eagle on the 72nd hole, which got him into a playoff. Phil Mickelson beat him with a par on the first extra hole.

Even last year, when he was out of the mix, he set the course record with a 62.

Reed still can’t escape the fallout from swiping the sand twice in the Bahamas, especially with Brooks Koepka calling him out during his media availability this week for the PGA Championship. Whatever he feels between the ears, Reed doesn’t let it affect him on the golf course. He is putting well, grinding hard and right there with a chance.

“At the end of the day, you can’t listen to what other people are saying — all you can control is what you do,” Reed said. “For me, I just go out there and try to play the best golf I can.”

Van Rooyen, meanwhile, didn’t flinch. He matched birdies with DeChambeau at the first. When DeChambeau hit driver on the 379-yard second hole to 6 feet, van Rooyen hit driver to 12 feet. Both made eagle.

DeChambeau first crumbled when his third shot to the par-5 sixth spun off the green, down the hill and into the water. He had to scramble for double-bogey, and his lead was down to one, and then it was gone when Thomas began the back nine with consecutive birdies.

Even after DeChambeau faltered, van Rooyen stayed stride for stride with the leaders.

“Today was fantastic,” he said. “There were obviously a lot of cheers for the group ahead of us, guys like Rory and J.T., that are fan favorites. I don’t know who I’m playing with tomorrow. I think I’m final group again tomorrow, so J.T. will be there. I don’t know who’s — Patrick, as well?

“So hopefully we can create a bit of fun tomorrow for the people.”