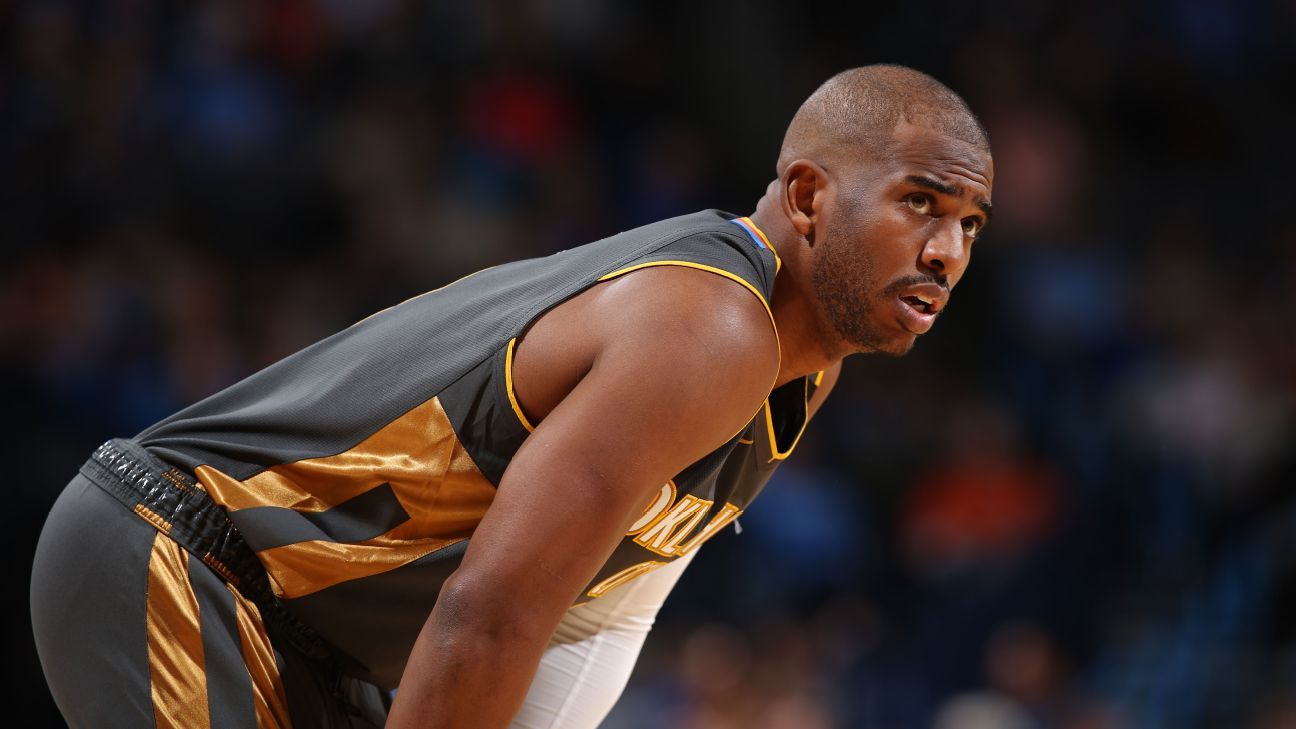 OKLAHOMA CITY — Before training camp, as nine new Oklahoma City Thunder players were getting to know one another while the organization itself was recalibrating to a post-Russell Westbrook world, Billy Donovan sat down with the three point guards on the roster and presented a bold plan.

They — being Chris Paul, Shai Gilgeous-Alexander and Dennis Schroder — are three of Donovan’s five best players. And he needed to find a way to play them all as much as possible, which would probably include playing all three of them together.

Paul is listed at 6-foot-1. Schroder is a generous 6-1. And Gilgeous-Alexander is the giant of the group at 6-5. None of the three are listed at more than 180 pounds. They’re all playmakers. They’re all scorers. They all thrive with the ball in their hands.

“If we moved it, if we shared it and if we played together, it would be really hard to guard,” Donovan told them. He saw it simplified: Two of the three would always being playing against defenders scrambling to close out on the perimeter.

“And you’re all really good at that,” he said.

Despite the positional and vertical challenges of it, Donovan wanted to try it. The counter-logic was obvious, and when Donovan floated the idea publicly at media day, it was met with heavy skepticism.

“I hoped it would work,” Paul said, leaning on the word “hope” pretty heavily. “We all have different personalities, you never know what different guys’ goals are and whatnot, but I was excited about it. The biggest thing was that Billy sat us all down. We met, us three and Billy and talked about the possibilities of what it could be and thankfully all of us are giving up a little bit here and there for the success of the team.”

Now, Donovan’s plan hasn’t just been validated 56 games into the season, with a sparkling 34-22 record and fresh off the lineup dismantling the Denver Nuggets in crunchtime for a 113-101 statement win Friday. The strategy has redefined the Thunder’s season, and the possibility to hope for something more ahead.

The Thunder are the league’s undisputed clutch-time maestros, with a league-best plus-27.3 net rating in a league-high 38 games that feature a score within five points in the last five minutes of regulation. They are 25-13 in clutch-time games, with the best offense in the clutch at an absurd 123.5 points per 100 possessions. Paul leads the league in clutch scoring (128 points), Gilgeous-Alexander is 12th (79) and Schroder is 27th (62). When that trio is on the floor, OKC outscores opponents by 29.6 points per 100 possessions.

Their preferred closing group — the three guards, plus center Steven Adams and power forward Danilo Gallinari — is the best lineup in the entire league by net rating, minimum 150 minutes (plus-30.2 per 100 in 159 minutes). 52.8% of those minutes have come in the fourth quarter.

“They’ve all coexisted, they’ve all found a way to make each other better,” Donovan said of the three guards. “I felt like it could work, but it wouldn’t have worked if those guys didn’t have the attitude and mentality they had towards it. Really it was them, they way they handled it.”

Against the Nuggets, it was Paul’s midrange mastery taking over. He snaked around screens, weaved through traffic, dribbled in, dribbled out, and knocked down shots. It’s become almost a formula the Thunder abide by: Get through the first three quarters, keep it close, and release the point guard. It is set up by Donovan playing different duo combinations throughout the game, setting up the final few minutes where they finish the game.

If the Warriors had the Death Lineup, the Thunder have the Endgame Lineup.

“If you guys had mics on all of us you’d get a chance to see we’re all each other’s biggest cheerleaders,” Paul said. “I’ve seen teams where guys aren’t necessarily rooting for each other. They want you to do bad so they can be in the game. But we’re not like that in here and it’s refreshing and nice to see.”

The Nuggets themselves are no crunchtime slouches, either. They’re 23-12 in clutchtime games, second-most wins in the league behind Oklahoma City. They found their way to the top tier of the West with a ground-and-pound approach, playing close games and winning behind timely stops and execution.

The Thunder wound up outscoring the Nuggets 35-24 in the fourth quarter. Denver’s sloppy finish on Friday was uncharacteristic, but also possibly evidence of the rhythm they’re trying to rediscover. The last two months have had games where the first priority was to field a playable rotation and the second was to try and win with whatever was cobbled together. Tonight’s starting lineup of Jamal Murray, Gary Harris, Will Barton, Paul Millsap and All-Star Nikola Jokic returned Friday night in Oklahoma City intact for the first time since January 6 due to injuries to everyone except Jokic.

They weathered the storm behind the pendulous brilliance of Jokic, who took on a more vocal leadership role during the last couple months. In the face of the recent attrition, the Nuggets entered Friday’s game still No. 2 in the West. It may look like moving is a chore and that he’s tucking the ball into bed rather than shooting it, but Jokic is a ruthless tactician.

“If you want to sleep on the Nuggets, if you want to sleep on Nikola, keep on sleepin’,” Nuggets coach Mike Malone said of the lack of appreciation for Jokic’s season. “We’re not concerned about any of that stuff. We know who we have. We have an MVP candidate, we have the best center in the NBA. And we’re gonna continue to play through and rely on him to lead this team on and off the court.”

“He’s not going to bed at night wondering why no one’s not talking about him,” Malone said. “He doesn’t care. He’s reading his book on horses, we’re winning games and he’s happy. If he’s happy, I’m happy.”

Jokic, and Malone, weren’t that happy after Friday’s game. The Thunder carved the typically stout Denver defense, and if this was a preview of a possible postseason matchup, it had to give Malone some pause. Those final five minutes is where the Nuggets often do their best work, and in this case, Oklahoma City outscored them 18-9 in the last 5:31 of the game. With Schroder battling through a tweaked ankle, the three guard lineup was deployed a little later than usual, but was on the front end of putting the wraps on another win.

The prevailing theme from everyone is unselfishness, but it’s also about connectivity. The Thunder have had reps in crunchtime, and it’s obvious to everyone that Chris Paul is good in close games. He produces winning possessions, consistently locating the best possible shot more often than not. But he doesn’t monopolize. On Friday, he had his moments, but he also leaned on Gallinari, he gave the ball to Schroder to let him work a mismatch, he had Gilgeous-Alexander bring it up and initiate. The plan is to let whoever is cooking to serve the meal and if needed, help clean the table after.

“We just want to win,” Gilgeous-Alexander said. “And whatever it is in that situation, we’re willing to do. We have guys that are unselfish, and that’s why it works.”

The Houston Rockets have the NBA’s attention with their radical smallball swerve, but the Thunder have been at their gamble since day one. It was borne out of necessity rather than strategy – like most all trendsetter moves are – but they committed to it and have leaned in. It’s their not-so-secret weapon and what keeps them as the frisky, dangerous, nobody-wants-to-play-them wildcard in the Western Conference playoff bracket.