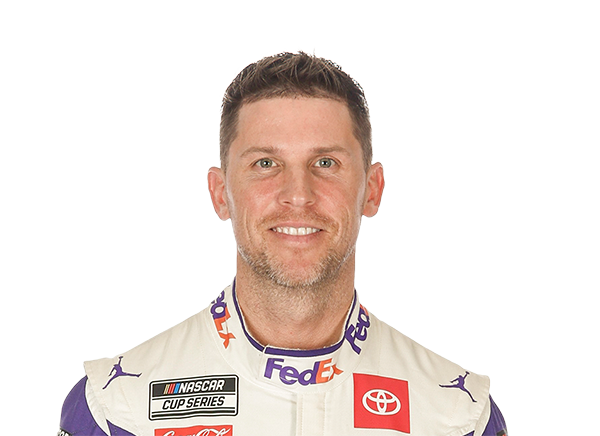 LAS VEGAS — Some levity returned to NASCAR on a rainy Saturday at Las Vegas Motor Speedway.

As drivers idled inside waiting for the eventual cancellation of qualifying for Sunday’s race, Kevin Harvick went on Twitter to defend reigning Cup Series champion Kyle Busch‘s participation in the Truck Series.

When a fan complained about on Twitter about Busch’s participation, Harvick first pointed out that Busch racing five times helps fund the entire Kyle Busch Motorsports team. Then he upped the ante by offering $50,000 to any Cup driver who can win one of the four remaining Truck Series races on Busch’s schedule.

“I like this so let’s make this fun,” Harvick posted on Twitter. “I’ll put up a $50,000 bounty for any full time cup driver who races a truck and can beat @KyleBusch in his next 4 races. #gameon.”

As rain washed out qualifying — the field for Sunday’s race was set by the 2019 points — bored drivers were quick to engage in Harvick’s salvo. Coca-Cola urged Daytona 500 winner Denny Hamlin, Busch’s teammate, to take the challenge, leading to a series of tweets between the two.

“Smoked him”?? I shoulda moved u but let u win your charity race. It’s on next time! https://t.co/HYbXbCypt8

Hamlin zeroed in on his home track in Richmond, Virginia, the final race on Busch’s schedule. He said if he can get into a Toyota Tundra and find sponsorship within the coming weeks, he’ll challenge his teammate.

Busch did not seem threatened.

“So what do I get if no one can do it?” Busch wondered.

Harvick said the money would then go to the Bundle of Joy Foundation run by Busch and his wife, Samantha, that helps families struggling to conceive children. Harvick egged on Marcus Lemonis, chairman of the Gander Outdoors brand that sponsors the Truck Series, to match his pledge, and there’s now $100,000 on the line to any Cup driver who can beat Busch in a Truck Series race.

On a dreary day at the race track, it was exactly what the sport needed after a difficult week wondering about Ryan Newman‘s frightening accident on the last lap of the Daytona 500. Many drivers initially feared Newman would not survive the spectacular crash, but he walked out the hospital 42 hours after the accident.

Still, the aftermath had some drivers reflecting on the dangers of auto racing. The series has avoided serious injuries the past several years and the last fatality was Dale Earnhardt in his own last-lap accident in the 2001 Daytona 500.

Martin Truex Jr. was in Daytona Beach when Newman was released from the hospital and spent time with him and said the duo is already scheduling fishing trips.

“I told him this week he’s lucky he’s such a hard-headed son of a gun,” Truex said. “It was a scary wreck for sure. Hopefully we don’t have to worry about things like that for sure. We just have to figure out ways to keep the cars on the ground.”

But he said he accepts the dangers of racing as a risk he assumed when he chose his profession.

“I think everyone who steps in a race car understands there’s a potential risk of injury,” he said. “I feel like a lot of people have gotten numb to it over the years because the cars have gotten so safe, but they are still, you have potential for danger. I think that’s why we sign waivers when we get in these things.”