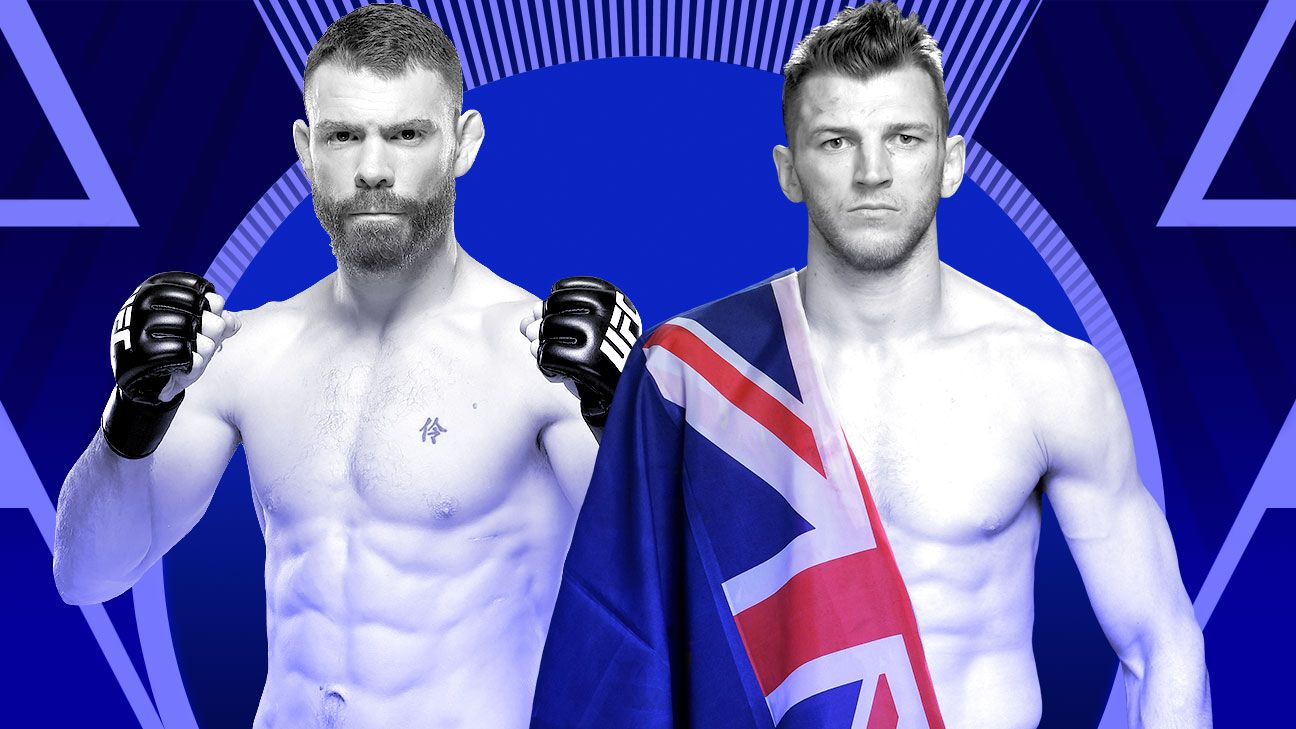 This weekend’s UFC Fight Night in Auckland will mark the company’s third trip to New Zealand, but this one undoubtedly has a different feel than the previous two.

The UFC visited Auckland in 2014 and 2017. New Zealand native James Te Huna headlined the inaugural card. Another Kiwi, heavyweight Mark Hunt, headlined the second. But while it’s true both men were born in New Zealand, they based their careers in Australia. And while New Zealand was unmistakably represented at those events, neither felt like a true showcase of the country’s talent.

Saturday, however, is undeniably that. The nation’s top gym, City Kickboxing, produced two UFC champions in 2019: Nigeria-born middleweight Israel Adesanya and Australian featherweight Alexander Volkanovski. Mixed martial arts is not just visiting New Zealand for the weekend. It is thriving there, and the country has reason to celebrate it.

One such reason for that is 30-year-old lightweight Dan Hooker, who meets Paul Felder in this weekend’s main event — in a fight some are calling a potential fight of the year. Lightweight remains arguably the sport’s most crowded division, especially at the top, and the only way to get anywhere is to do something that truly stands out.

Both Hooker and Felder have reputations as exciting, action-packed fighters. Both have explicitly said they are hoping for a back-and-forth, memorable bout. Felder has said he hopes New Zealand will be so entertained by what it witnesses Saturday, he’ll have an entire new country of fans when he boards his return flight to Philadelphia — win or lose.

With undefeated champion Khabib Nurmagomedov scheduled to face Tony Ferguson in less than two months, and superstar Conor McGregor closely eyeing that matchup, Saturday’s bout could easily fly under the radar. It shouldn’t in New Zealand, though, as the city of Auckland continues to build a potential powerhouse of talent at City Kickboxing.

2: Previous visits by the UFC to Auckland — in June 2014 and June 2017, with Hooker fighting (and winning) at both events, feeling right at home.

1: Fighters who have finished three consecutive UFC bouts by elbow strike. It’s Felder, who did so against Alessandro Ricci, Stevie Ray and Charles Oliveira in 2017.

6: UFC fighters with spinning back-fist KOs. Felder is among those who have won with this flashy technique.

6.16: Strikes landed per minute by Hooker, putting him behind only Justin Gaethje and Dustin Poirier among active UFC 155-pounders.

Following his TKO victory over Jim Miller in April 2018, Hooker was being interviewed inside the Octagon by a member of the broadcast team — Felder — when they had this exchange:

Felder: “I’ve been waiting for somebody to actually have some guts and stand here in front of me and say that they wanted to fight me. So if [UFC matchmaker] Sean Shelby talks to me tonight and says he wants me to fight you, you’re a tough opponent and I think you deserve somebody higher ranked like that.”

More recently — and less respectfully — there was this:

Rivals Dan Hooker and Paul Felder speak about a recent online argument ahead of their UFC Auckland showdown.

Hooker’s last fight, a unanimous decision over Al Iaquinta, was an important one in terms of his status in the division. Hooker is exceptionally entertaining and he had won five of six going into that bout against Iaquinta — but in his toughest task to that point, he had been outclassed by Edson Barboza. At this point, Hooker has proved he’s among the very best in the weight class. Felder has proved the same and, at five years older than Hooker, has less time to afford a loss. This is a fun stylistic matchup with a lot at stake. Felder via third round TKO.

What else to look for … beyond the main event

The rest of the card, co-main event on down:

The co-main event is a battle for the ages

Both light heavyweights in Saturday’s co-main event were ranked in ESPN’s recent list of the top 25 MMA fighters under age 25. Jimmy Crute is No. 7, and Michal Oleksiejczuk is No. 11.

But it’s a different number that most concerns these guys: Each is 0-1 in his last fight, interrupting a promising run.

Crute, a 23-year-old from Australia, was unbeaten in 10 pro fights heading into last September’s fight with Misha Cirkunov, in which he succumbed to a first-round Peruvian necktie submission.

Nickname of the night

“The Irish Dragon” (Felder) meets “The Hangman” (Hooker) in the main event. Earlier in the night, a “Warrior” (Zubaira Tukhugov) will go face-to-face with “The Angel of Death” (Kevin Aguilar).

There’s also a “Tarantula” (Jalin Turner), an “Assassin” (Song Kenan) and pure “Danger” (Shana Dobson). Maki Pitolo is known as “Coconut Bombz,” which is cool and evocative. And we’d love to know the story behind Yan Xiaonan‘s “Nine” moniker.

But we’ve got to hand the trophy to “Combat Wombat,” because Ben Sosoli found a rhyme that relates to both what he does and where he’s from. A wombat is, after all, native to Australia, just like Sosoli.

A group of wombats, by the way, is known as a wisdom. Let’s assume the best and say that applies to a group of Sosolis, too.