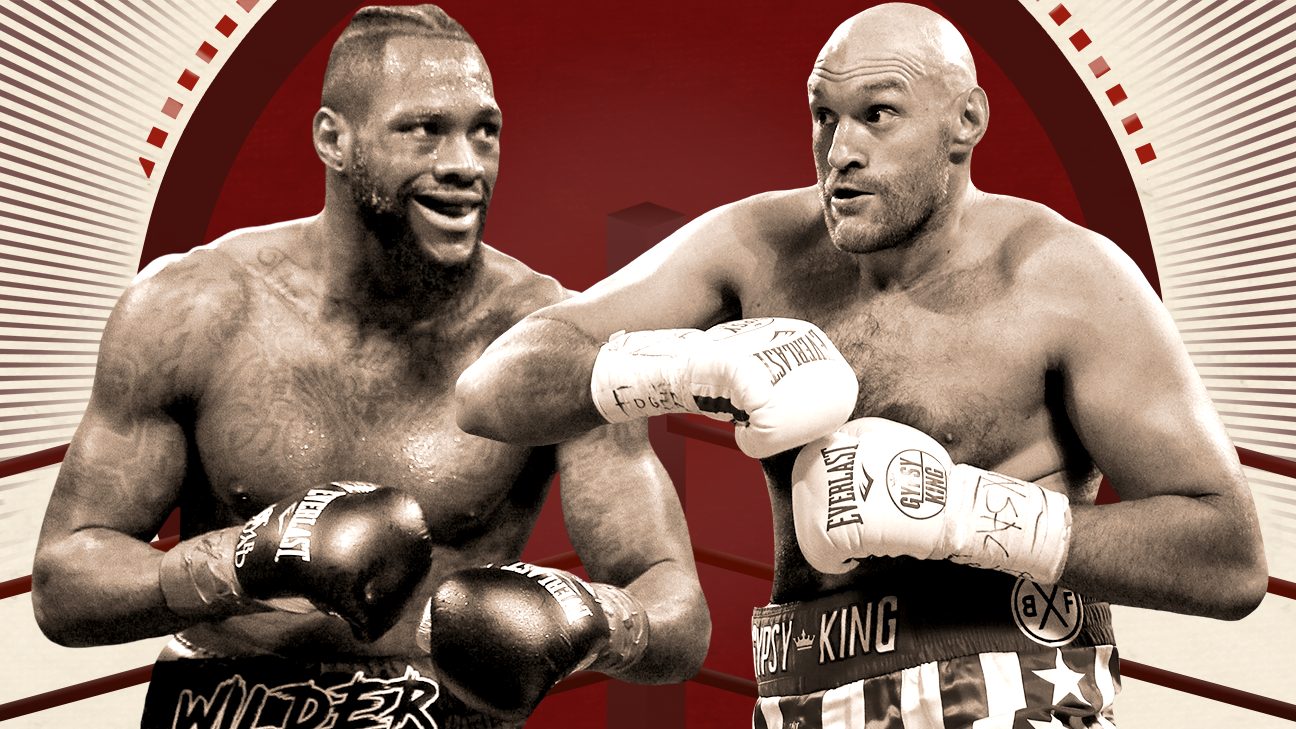 After all, the fight was entertaining, had drama, no clear-cut winner and was a commercial success.

Even though the slicker Fury outboxed Wilder for long stretches, Wilder, boxing’s most destructive puncher, knocked Fury down in the ninth round and then seemingly knocked him out with a brutal combination in the 12th round that Fury somehow survived. In the end, the judges were split: 114-112 Fury, 115-111 Wilder and 113-113.

Ultimately the rematch didn’t take place immediately, but since that fight, Wilder and Fury have been busy. Each man has won two fights apiece to bring us to this moment: the heavily anticipated sequel, which will take place Saturday (ESPN+ PPV-Fox PPV, 9 p.m. ET) at the MGM Grand Garden Arena, with the winner being recognized as the No. 1 heavyweight in the world. The deal also calls for a Wilder-Fury fight later this year regardless of who wins the rematch.

“The first fight was an amazing fight. It was a very controversial fight,” Wilder said. “We left people confused about what happened or who won. This is where we come and settle everything. This is judgment day. This is unfinished business. I’m picking up where I left off.”

“We finally have the rematch and I can’t remember a bigger heavyweight fight in a long time,” Fury said. “Maybe Lennox Lewis versus Mike Tyson [in 2002] was the last big one like this, and that was another U.S. versus U.K. showdown.”

This is your Ringside Seat for the big fight:

How is Fury’s eye?

When Fury met heretofore unknown Otto Wallin in September, Fury was pushed as hard as he’d ever been. Although Fury emerged victorious by decision to retain the lineal title for the fifth time, he suffered two horrendous cuts over his right eye.

“I hope it comes open in the fight. It will add a little more drama. A cut is a cut. A fighting man tastes blood. I want to taste it, rub it, punch it and mix it up.”

The cuts required 47 stitches, and many question whether Fury’s eye is truly good to go just five months later.

Fury insists his eye is healed.

“The cut isn’t going to determine the outcome of this fight,” he said. “I hope it comes open in the fight. It will add a little more drama. A cut is a cut. A fighting man tastes blood. I want to taste it, rub it, punch it and mix it up.”

That said, Fury did bring in Jacob “Stitch” Duran, one of the most acclaimed cutmen in the business, to work his corner.

“The decision was I got a big cut in the last fight, 47 stitches across the top of the eye inside and out, and I’m going to need someone who’s the best at what they do, and Stitch is the best at what he does,” Fury said. “So yeah, we’re not cutting any corners, that’s for sure.”

Does Wilder plan to target Fury’s right eye for his advantage and look for the fight to be stopped?

“I definitely look forward to re-cutting open that eye,” Wilder said. “Once it is open and blood is all in his face, I might get a little bit on me as well, it’s all right. We’ll see if they continue to keep that fight on because I’m already dangerous as is. And if that eye cuts open again and it got blood in his face, then that’s going to be up to the doctors, because I’m coming in for the kill. You know what I come to do. I don’t play around at all and especially with this fight right here.”

Tyson Fury tells Desmond Howard and Rece Davis that he was feeling stale before his big match with Deontay Wilder so he decided to change trainers and return to basics.

When Fury returned from a 31-month layoff as he addressed personal problems, he did so with a new trainer in Ben Davison, whom Fury credited in large part with helping to save his career. Together they went 4-0-1, but when the Wilder rematch was made, they split and Fury turned to SugarHill Steward, the nephew of the late Hall of Fame trainer Emanuel Steward (and who changed his name last year from Javan “Sugar” Hill given what he called a father-son relationship with Steward).

Fury and SugarHill met in 2010 when Fury traveled to Detroit to spend time training at Steward’s famed Kronk gym, and when Fury consulted with his cousin, former middleweight titlist Andy Lee, who was trained by Steward, they came up with SugarHill. Lee is serving as an assistant trainer.

But will the change make any difference against Wilder? After all, Fury (29-0-1, 20 KOs), 31, of England, has had about only two months to work with his new team.

“I had a good defensive coach, Ben Davison. We worked a lot on defense every single day for two years. It was defense, defense, defense,” Fury said. “So I needed an aggressive trainer. I worked with [SugarHill] in the past. I knew he was a good guy. I knew we got along well, which is very important. Communication is key to any good relationship, and that’s why I brought him in, and it’s been one of the best decisions I’ve ever made. We just jelled straightaway.”

Wilder said he doesn’t think the change will be of any help.

“I don’t think he’s confident that in the fight and when he’s dealing with me because of the state of being that I left him in. I gave this man a concussion. And easily that will happen again the second time around because the head is not meant to be hit especially by no power like Deontay Wilder’s. He’s got a lot to think about before the fight.”

Wilder co-trainer Jay Deas, who has been with him for his entire career, agrees that it’s very difficult to get chemistry with a new trainer so quickly, even if it’s somebody the fighter already knows.

“It’s just something that takes time,” Deas said. “I think his new trainer is a good trainer from what I’ve heard. Tyson, he knows how to box so he knows what he’s doing in the ring, so it depends what they’re going to bring to the table together. We will see. I hate that for Ben, but at the same time Fury’s got to do what he thinks is best for his career. But our team is solid. Our team is consistent and we’ve been that way for a long time, so I feel like that gives us an advantage.”

Wilder is seeking his 11th consecutive title defense, which would break a tie on the all-time list with Muhammad Ali, who made 10 during his second title reign (from reclaiming the title against George Foreman in 1974 until he was upset by Leon Spinks in 1978).

“This is everything to me. This is breaking the tie of consecutive title defenses with me and Muhammad Ali, my all-time great idol,” said Wilder, who can also become the first American lineal champion since Hasim Rahman upset Lewis in their first fight in 2001. “I’m looking forward to setting history with that.”

Fury, who is making the sixth defense of the lineal title, has already ended the reign of one titleholder with 10 or more defenses. He outpointed unified champion Wladimir Klitschko in 2015 to end his streak of 18 successful defenses. If Fury defeats Wilder, he will be the first fighter to do that twice.

16.5: Wilder’s connect percentage vs. Fury in their first fight; lowest in any of Wilder’s 23 fights tracked by CompuBox.

6.4: Punches per round absorbed by Fury, lowest among heavyweights and tied for fourth lowest among all championship boxers.

6: Fury is making his sixth defense of the lineal heavyweight title won in November 2015, the third-most successful lineal title defenses in the past 30 years (Wladimir Klitschko 11, Lewis 8)

Wilder and Fury have each participated in two rematches, and given their history it would seem to indicate Saturday’s fight will end in a knockout. All four of their combined previous rematches ended in KOs.

Wilder won a lopsided decision over Bermane Stiverne in 2015 to win his heavyweight title. When they met in a mandatory rematch in 2017, Wilder annihilated Stiverne in the first round.

In 2018, Wilder defended his title against Luis “King Kong” Ortiz and survived some rocky moments to knock him out in the 10th round of a contender for fight of the year. When they met again last November, Wilder took Ortiz out with a right hand in the seventh round.

In 2009, Fury won a 10-round decision against John McDermott and then stopped him in the ninth round of the 2010 sequel. Fury outpointed Dereck Chisora in a 2011 British title fight, and when he challenged Chisora for the European title in a 2014 rematch, Fury stopped him in Round 10.

Check out the best moments from the final news conference before the rematch between Deontay Wilder and Tyson Fury.

“I don’t respect his power. He’s just a tall, big man that can move around a ring and that’s about it. As far as power, there’s none there and I don’t think he’ll be able to develop it. I don’t care what trainer he brings in, you just don’t develop that power in a couple of weeks, or in a month because you have this trainer that comes in.” — Wilder on his disdain for Fury’s punch

“The biggest mistake I made last time was not making him pay when he was hurt. I didn’t know what I had in the tank last time. I’d never done 12 rounds [during the comeback]. This time, I know I can do the distance and we’re not getting hurt. I’ll throw everything but the kitchen sink at him and he won’t know what hit him.” — Fury on an adjustment he will make

Rafael’s prediction: As Wilder often says, his opponent needs to be perfect for the entire fight, and he needs to be perfect for only two seconds — the time it takes for him to land the massive right hand that is the best in boxing and maybe the best in history. Wilder surely will be outboxed for stretches against Fury, who has great skills, but at some point Wilder is going to find a home for the big shot. He did in the first fight, and dropped Fury twice. This time when Wilder floors him, it will be for good.