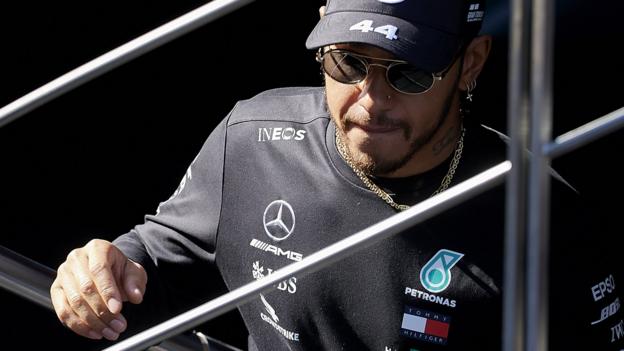 The innovative steering system introduced by Mercedes for this season will be banned from 2021.

Mercedes have been cleared to use the system for 2020 and technical director James Allison hopes it will “bring an advantage during the season”.

But the rules are changing for 2021 in such a manner that the system would not be legal under the new regulations.

The Mercedes system allows the driver to alter the ‘toe angle’ of the front wheels – their angle in relation to the longitudinal axis of the car – while he is driving.

F1 cars operate with a degree of ‘toe-out’ – which effectively means that the front part of the tyres are turned outwards by a few millimetres.

This is beneficial when the driver turns in to the corner as it gives them more grip and stability but causes a degree of ‘scrub’ on the straights, where the tyre is dragged across the track at an angle, which causes its temperature to rise.

In the Mercedes system – dubbed ‘dual-axis steering’ – the driver can pull on the steering wheel to straighten the front wheels as he comes on to a straight and then push back on it to revert to the ‘toe-out’ position as he enters a corner.

This is allowed under the 2020 rules because the relevant clause says only: “The front wheels are adjusted solely by the steering and under the full control of the driver.”

But the 2021 rules contain a clause which says: “The alignment of the front wheels must only take place through a constant function of a rotational movement of a single steering wheel.”

This would outlaw the push-pull motion of the Mercedes system.

Masi said: “We will see what teams can come up with within those boundaries of what the regulations are written for in 2021.”

Rival teams have said they will have to assess the purposes and benefits of the system before deciding whether to adopt it on their cars for 2020.

Racing Point team principal Otmar Szafnauer said: “If it is a huge effort for little benefit probably (we will) not (go for it) because of limited resource, but if it is a small effort for a big benefit, then probably yes.

“It looks like a clever bit of ingenuity. I’m sure that everyone now will see how quickly they can get it on.”

Mercedes have declined to explain the exact purposes of the system.

Allison said: “It’s an innovative idea which allows the drivers an extra dimension of control on the steering system. Why we do it, exactly how it works and all those sorts of things, we’d rather keep those to ourselves.

“It’s an example of how this team is always pushing to try to find new ways to make our car quicker and it’s just great fun having it at the track.”

Ferrari driver Sebastian Vettel said: “I don’t think it will give you much. Maybe I am underestimating it but I don’t think it is the ticket to win. I think there is a lot more elements to building a competitive car but for sure it is an innovation and we will see whether it is something everyone has to pick up on or not.

“I can only imagine it feels weird but if it is faster then there is no concern as you go for the faster option.”

Speculation as to the purposes of the system has centred on its likely ability to keep tyre temperatures down – which could be a key advantage as F1’s Pirelli tyres are prone to overheating – and perhaps a small aerodynamic advantage from the altered angle of attack of the wheels on the straight.

Zion returns for Pels: ‘Getting a feel for it again’
Saban: QB Young day-to-day with shoulder injury
Bowman, Ware to sit race at Roval with injuries
From a town 700kms west of Sydney to the big stage, McKenzie’s winding journey to the World Cup
Bears RB Montgomery ruled out vs. Giants