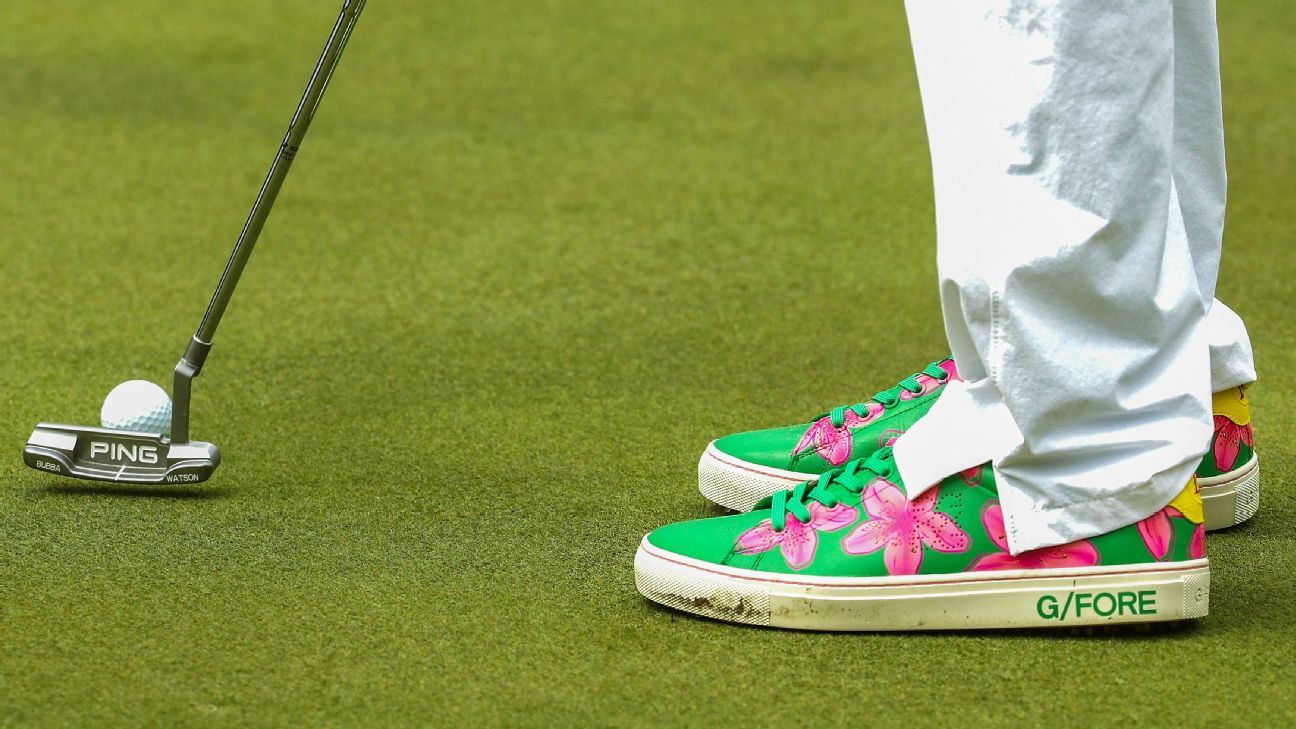 Whether you’ve recently watched a PGA Tour event or follow professional golfers on social media, you’ve likely seen a drastic change in footwear choices from the best players in the world.

Customized shoes, running shoes with spikes, and statements and messages expressed through words and pictures and bright colors have replaced the old, boring saddle shoes of the past. Golfers are now showing their personalities and expressing their opinions through their feet.

Shoe companies are in the act. So, too, are individuals, people like Roly Padron, who customizes special looks for some of sports’ biggest names — in golf and otherwise.

Padron, who runs Nomad Customs, has been customizing shoes since 2013, when he caddied for NBA great Ray Allen and, got up the courage to ask Allen whether he could customize a pair of his golf shoes. Two weeks later, Allen dropped off 10 pairs of shoes with Padron for designs.

He has since made golf shoes for former President Barack Obama, Michael Jordan, Albert Pujols, Penny Hardaway and a profusion of PGA players.

“I feel that I’m part of that trend setting, blending sneaker culture and golf, which you see a lot more of now,” Padron said. “I enjoy it, and that’s something that I really look forward to, people looking forward to seeing what is going to come next with shoes and customization.”

Padron has helped push the envelope on what is acceptable and how golfers are able to express themselves through their footwear.

In the past, golfers had stuck to the old leather saddle shoes that came in white, black or brown. Pair that with some khaki pants and a potato sack of a polo and you had the golf uniform from the early 1990s.

That style of shoe, with metal spikes, has been produced by FootJoy since 1910, and while FootJoy still holds the primary spot in market share in golf shoes, the company has adapted as style and taste is changing.

Those FootJoy shoes were even worn by Walter Hagen and the American team in the first Ryder Cup, back in 1927.

The brand has plenty of tour players on its roster and understands the want for customization, which has resulted in a partnership with Padron and Nomad Customs to help tell stories for the players and display their personality.

But the shift has gone beyond customization; as tour players of a younger generation are becoming the face of the tour, so too are their style choices being put front and center in the spotlight.

It was no more prevalent than when Brooks Koepka wore a pair of Nike Off-White Air Max 90 golf shoes at the 2019 PGA Championship. When asked about the shoes, Koepka quickly replied that “It’s fashion, bro.”

“This is such like a typical golf nerd, like 40-year-old white man, like…I don’t know how to explain that. It’s Off-White, it’s fashion,” Koepka said. “I guarantee the whole golf world has no clue what Off-White is, but it’s fresh. If you’re a sneakerhead, you’ll get it, or into fashion.”

That shift is making its way through more and more players on tour and with the average golfer, as well.

“It’s not where you come from, but it’s where you’re going.”@Cameron__Champ wore one black and one white shoe for Black History Month, while paying tribute to his Grandpa Mack. ❤️ pic.twitter.com/eyoICGgYfk

Masun Denison is the global footwear director at Adidas and has seen that change in what consumers want over the past five years.

“Golf can be so off-putting to some with the country club life, how much it costs, how exclusive it is and you have to have so much money,” Denison said. “The uniform, so to speak, of golf has been broken. That’s what’s really exciting is you can dress how you want to a certain degree. It’s the fact that people are seeing the athletes now wearing it. We’d hear five, six, seven years ago that, yeah, spikeless shoes are comfortable, but how come the guys on tour aren’t wearing them?”

For the fashion to work, the brands need to be cognizant of function along with style. The shoe can’t just look cool; it also has to perform and function as a golf shoe. Otherwise it’s all for naught.

Rickie Fowler has been more fashion forward in his shoes, getting customized shoes from Nomad Customs. But working with Puma, he has made sure the function is there, as well.

“Rickie’s very involved in the process, and he’s got his own unique style,” said Grant Knudson, head of product at Puma golf. “The high-top, that came out of a meeting with myself and our designers and Rickie at his sister’s house. He was talking about things he wanted to do, his style and how it was evolving, so we went back to the drawing board and came up with some interesting concepts.”

A large part of the customization and creativity comes from making a statement, or sending a message. Cameron Champ honored his late grandfather and celebrated Black History Month with his shoes.

Justin Thomas honored Kobe Bryant with an intricate painting on his shoes done by Nomad Customs.

“I think what’s really cool is you have access to tour players now more than ever through social media,” Denison said. “Most people would maybe not know that Jon would not only have such a close tie to Arizona but the story of Pat Tillman overall and that means a lot to him. He can put that shoe on social media and people can see not only that great image of Pat Tillman and celebrate his amazing life and what he did for everyone but an insight into Jon.”

The tour players buying in has been a huge part of that push toward new things and an even bigger part of why it’s gathering steam in the consumer market. Acceptance from the game’s best means it should be accepted anywhere in the minds of most.

“The last seven to 10 years, it’s been great to have both the influence of the sportswear brands as well as the younger golfers on tour that grew up wearing the shoes that they were making,” Knudson said. “It was a great combination to have both of those happen at the same time to now where there’s this fusion of the right athletes and the right age and the right genre and the right brands making the right product.”