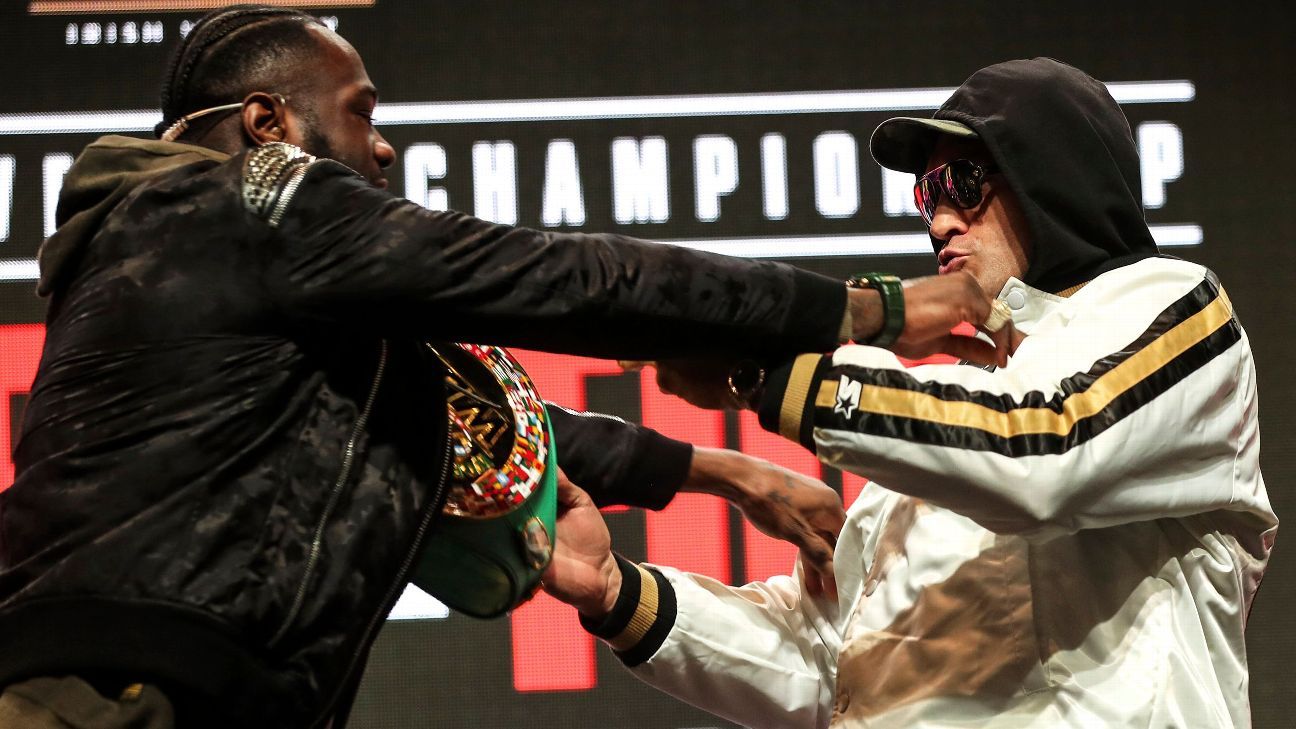 LAS VEGAS — Heavyweight world titlist Deontay Wilder made his walk to the stage first, and when lineal champion Tyson Fury joined him moments later, all of the niceties and mutual respect they have shown each other throughout the buildup to their rematch was out the window.

Instead, the two giants went nose to nose and their confrontation eventually erupted into pushing and shoving, forcing security to intervene to keep them apart as the final news conference for their much-anticipated sequel commenced Wednesday inside the MGM Grand Garden Arena, the same place where they will fight Saturday (ESPN-Fox PPV, 9 p.m. ET).

Even as a mass of humanity stood between them, that did not stop Wilder (42-0-1, 41 KOs), 34, of Tuscaloosa, Alabama, and Fury (29-0-1, 20 KOs), 31, of England — so respectful for the past few months — from spending the next several minutes insulting each other, shouting at each other and using the sort of salty language that kept the censors on their toes as the final proceedings were televised live simultaneously on ESPN2 and Fox Sports 1.

Moderator Joe Tessitore of ESPN tried to keep things under control when the fighters finally sat down for the formal part of the program, but Wilder and Fury kept ripping each other, a dramatic change in demeanor from the previous two prefight news conferences during which they had shared the stage in recent months.

“You can see that we’re both emotionally invested in this,” Wilder said. “We both want to give you all the best of us. Come Saturday night, we’re going to release all of our energy in the ring.”

The rematch will come 14 months after Wilder and Fury maintained their undefeated records in an entertaining fight that ended in a split draw, with Fury believing he won because he had so thoroughly outboxed Wilder for long stretches and Wilder believing he was the rightful victor on the strength of two knockdowns, one in the ninth round and a thunderous one in the 12th that Fury somehow survived.

After they took their seats Wednesday, Wilder attacked Fury for suggesting that it was he who had brought Wilder to big-time boxing by fighting him in 2018.

It was Wilder who reached out to Fury during the depths of his well-chronicled experiences with drugs and mental health and helped convince him to return to boxing. After two warm-up fights, Fury faced Wilder and performed at a very high level in the draw.

“I provided food for your family [by fighting you], and I’m doing it for the second time,” Wilder said. “Don’t you ever forget that. I brought you to big-time boxing. I dared you to come back.”

“Deontay Wilder is spouting a lot of rubbish,” Fury said. “He gave me an opportunity, but I gave him the biggest paydays of his whole life, brought him to the biggest stage in the world. And here he is — this is how he thanks me? I put millions in his account. You owe me everything. Welcome to big-time boxing.”

Jay Deas, Wilder’s career-long trainer, said he expected there to be some nastiness Wednesday.

“Its fight week, this is what is supposed to happen,” Deas said. “This is what happens when you have the two best heavyweights in the world, both undefeated and highly motivated. I wouldn’t expect anything less than this type of energy.”

“I am excited watching the fighters’ reactions today. Up until now it has been quiet and subtle,” said Hill, who has replaced Ben Davison in Fury’s corner. “Today you saw the mood swings, and all the hard work the fighters have put into their training camps. Emotions are going up, and emotions are going down, but this is what big-time boxing is. Both of these fighters have a chip on their shoulder and are expressing themselves as they should.”

Wilder will be making his 11th title defense in an effort to break a tie with his idol, Muhammad Ali, on the career list of consecutive heavyweight defenses. Fury will be defending the lineal title for the sixth time.

Although Wilder is boxing’s most devastating puncher, has the highest knockout ratio in heavyweight title history and scored two knockdowns against Fury in the first fight, Fury claimed he would go right at Wilder in the rematch and predicted a second-round knockout victory.

“Wanting to go head to head with him is a bold move, but we fight fire with fire,” Fury said. “When I went at him in the first fight, though, he could not contain me. If I start doing that in Round 1, then he will be gassed by Round 5 and hanging on for dear life, if he even gets that far.

“The 12th round of our first fight was a good round, and credit to Wilder, he got me with two of the best punches I have ever seen thrown in a 12-round heavyweight fight. But the thing Wilder must be thinking is, ‘I hit that guy with my hardest punch in Round 12, and he got up. What do I have to do to keep him down?’ He’s going to try to land the right hand. If I’m stupid enough to get hit with it, I deserve to lose. I hit the floor last time, but I showed that I’m truly a fighting man. If he can’t finish me, I’m going to eat him up.”

Wilder said he does not believe that Fury will attack him, but if he does, he said he will be ready to answer with his big punches.

“Anything is possible in the ring, but it comes down to if he can back up his words,” Wilder said. “I don’t believe anything Fury says. I think he is just trying to butter me up and use a lot of mind games. I am not concerned with what he says. I am more focused on what he does. I am a man of action. I am planning for everything, but I think when coming forward doesn’t work for him, he will resort to what he knows. He may try to come forward at first, but once he feels my power, that will stop quickly.”

Earlier Wednesday, at its monthly meeting, the Nevada State Athletic Commission assigned the officials for the fight. The commission went with some of the most experienced officials in the world. Kenny Bayless, who has worked numerous high-profile fights, will be the referee. The judges will be Dave Moretti, Glenn Feldman and Steve Weisfeld, all of whom have a wealth of championship experience.