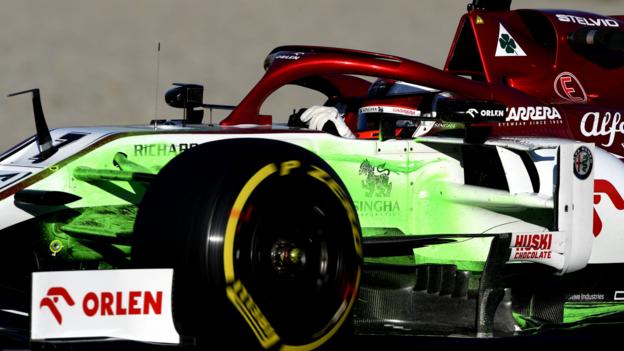 Alfa Romeo’s Kimi Raikkonen was fastest on the second day of the first pre-season test, as Mercedes caused a stir with a new steering system.

“It allows the drivers an extra dimension of control on the steering system,” said technical director James Allison.

“Why we do it, exactly how it works and all those sorts of things, we’d rather keep those to ourselves. But we hope it’s an innovation that will bring an advantage during the season.

“It’s an example of how this team is always pushing to try to find new ways to make our car quicker and it’s just great fun having it at the track.”

Allison insisted the system – one of the aims of which is believed to be keeping tyre temperatures under control – had been developed with the knowledge of governing body the FIA. But rival teams may well feel they want to test its legality.

Hamilton was ninth fastest on the day but his fastest time from Wednesday remained the quickest of the winter so far, just over 0.1secs faster than Raikkonen’s best on Thursday.

Headline lap times in testing are unreliable indications of real pace because it is impossible to know the specification in which cars are running, and fuel loads, engine modes and tyres make significant differences to lap times.

Perez had been fastest for most of the day, until a late run on the softest tyre compound from Raikkonen, and the Mexican’s pace in the Racing Point did little to quieten grumbling from rivals about how similar the car appears to last year’s Mercedes design.

The RP20, as it is known, bears a striking resemblance to 2019’s Mercedes W10 in a number of areas, especially the front wing, nose, front suspension and side-pod leading edge.

Racing Point technical director Andrew Green said the car’s likeness to a Mercedes was a result of a change in design philosophy.

Racing Point have a commercial agreement with Mercedes under which they buy engine, gearbox and some suspension parts from the world champions, as allowed under the rules.

He said that because Mercedes’ gearbox was designed for a car that had a different design philosophy from the one Racing Point had previously been using, it was restricting development possibilities.

“It was clear that if we carried on the route we were going, we were going to end up at best where we finished in the championship last year,” Green said. “That wasn’t going to be acceptable.”

He said the team had decided to take the “very, very big risk” of changing their methodology and following Mercedes in a bid to improve on their seventh position in the championship last year.

Other teams have questioned the similarity between the two cars, because F1 teams are required to design themselves the aerodynamic surfaces of their cars and are forbidden from collaborating.

But Green and Mercedes both insist everything was above board and legal and that there had been no sharing of information beyond what is allowed under their commercial agreement on non-restricted parts.

First crash of the winter

The first day of pre-season testing passed without major incident but on Thursday Haas driver Romain Grosjean became the first driver to crash in 2020 when the Frenchman lost control at Turn Four late in the day.

Grosjean spun and brushed the wall backwards but was able to return the car to the pits under its own power.

Earlier, Hamilton’s team-mate Valtteri Bottas spun the Mercedes at Turn 13 and Raikkonen also had a spin, this time at the chicane. The Finn also caused a late red flag when his Alfa stopped on track.

Bottas took over from Hamilton after the world champion completed a race-simulation run in the morning.

Bottas was attempting the same in the afternoon but had to cut it a few laps short when the car suffered an electrical problem that ended the team’s running early.