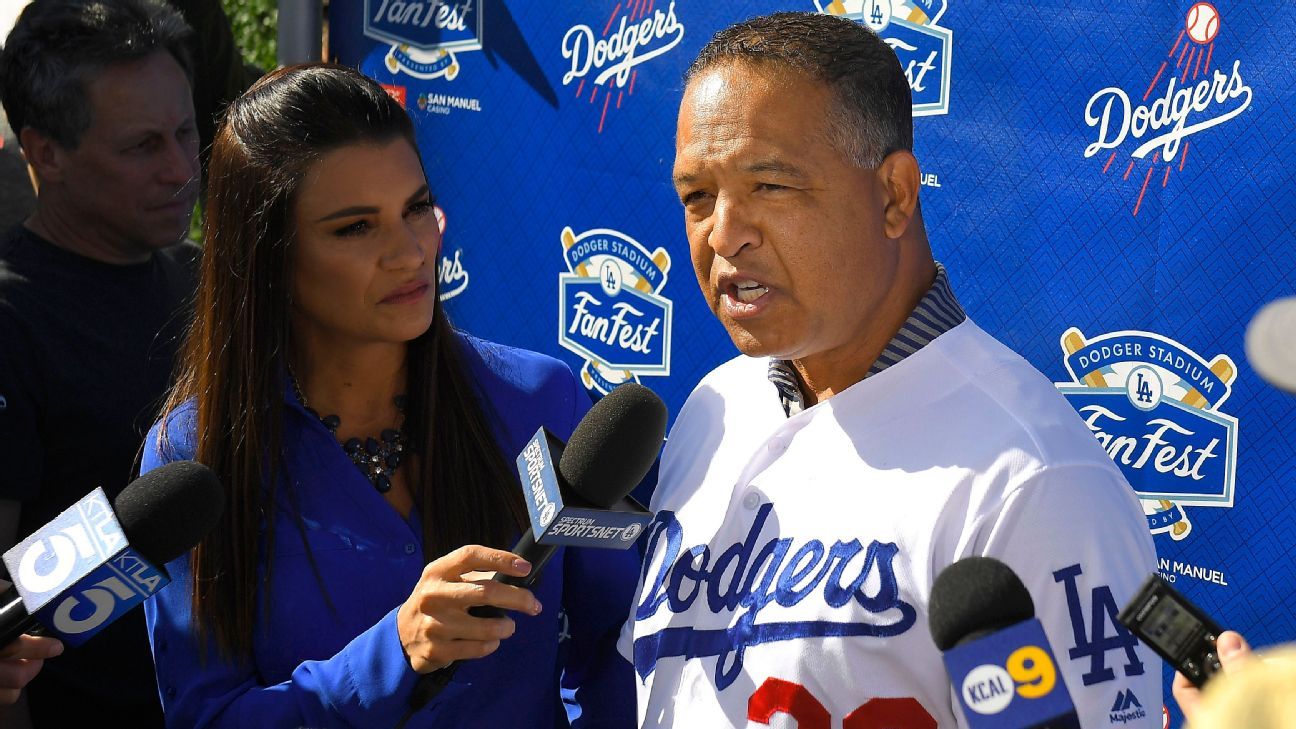 This has been the busiest spring training in memory — and it has nothing to do with the action on the field. Baseball has been buzzing with talk of sign stealing and commissioner Rob Manfred’s handling of the Houston Astros‘ transgressions, a proposed change to the playoff format and trade rumors involving some of the game’s biggest names.

ESPN baseball reporters Jesse Rogers and Alden Gonzalez made the rounds during media day at the Cactus League in Arizona, asking managers and GMs for their takes on some of the hot-button issues.

How are you addressing sign stealing as spring training opens?

Los Angeles Dodgers manager Dave Roberts: “We’ve been working on getting a handle on multiple sign systems, and probably getting some type of card that [the pitcher] and the catcher have to be able to kind of choose which system they use, and can be able to change it at any point in time, whether it be within an at-bat or change of an inning, whenever they want.” 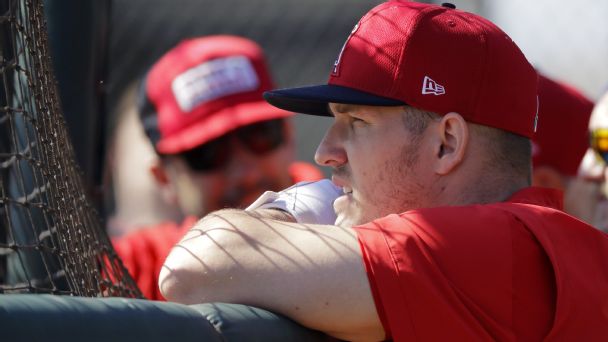 The Astros scandal has inspired star players like Mike Trout to air their thoughts on cheating. Will baseball ever be the same? Alden Gonzalez
• Passan: War of words won’t end soon

Oakland Athletics GM David Forst: “I don’t know that we’re doing anything differently. We’ve had these concerns for the last couple seasons, not only going into Houston but other places. I think Bob [Melvin] and the catchers, the pitching staff, I think they’ve had an ongoing conversation about how to change this up or how to do it. I don’t think this is something new that has to be addressed for the first time.”

Seattle Mariners GM Jerry Dipoto: “It’s not like sign stealing is new to baseball. This is a much different thing, but we have adopted multiple sets of signs, we changed them very frequently, and made sure that we never got too stale. I remember coming up as a player, you had one set of signs on Opening Day and you didn’t change the signs again until the All-Star break, and through the year you’d go through two sets of signs. We’re doing four and five a game, just to make sure that there’s a constant flow.”

Texas Rangers manager Chris Woodward: “Making sure our guys abide by the rules. We’re very aware of what happened with the Astros. Obviously that was probably the height of how bad you could do it. But teams are always going to try to get away with as much as they can. So we tell our guys, ‘Let’s not even border on getting close to the [line].’ Teams are going to get as close to the line as they can. We do that in other ways as far as just preparing, trying to do the best we can with the numbers and do everything we can with our players and our staff to give ourselves the best advantage. But in that way, a line’s been drawn.”

San Diego Padres manager Jayce Tingler: “You don’t want to get too far out in front until we know exactly what the rules are, as far as video and things like that. I feel it’s our responsibility to be versatile and be able to protect our signs, and besides that, we’re just waiting to hear the rules.”

Chicago Cubs GM Jed Hoyer: “You have a responsibility to protect yourself from legal sign stealing. That’s on us. You can’t blame that on anyone else. We have to be vigilant. It’s important to classify those things differently. The real-time, trash-banging stuff, you can’t have that, but if it’s based on the night before or the last start or whatever, that’s legal and we have to come up with ways to prevent that.”

What is your preferred playoff format?

Major League Baseball is considering a new playoff format that would add two more wild-card teams in each league, with the top team in each league getting a bye and the other six teams playing best-of-three series.

Forst: “My preference is to go back in time and get rid of the one-game wild card the last two seasons. … We [the A’s] obviously are victims of that game three times now. I’m open to any proposal that changes that format.”

Dipoto: “I think more teams in the playoffs is a good thing. I vote yes. That’s fun. It’s fun to imagine more teams competing. I go back to 1994, as an active player — when they went to the new three-division leagues and added a wild card, who had ever heard of such a thing? It was, like, blasphemy. And it made the postseason so much more exciting. I don’t see why the next layer isn’t going to do the very same thing.”

Tingler: “I just want to see the Padres in it.”

Woodward: “I’m all for more teams, not because our team right now doesn’t grade out as a top-three team. Regardless of whether I had the best team in baseball or the worst team in baseball, it’s healthy for the game. We do it in other sports.”

Cincinnati Reds manager David Bell: “It’s something I thought about for sure. One idea I’ve had for years is making the first round longer, a best-of-seven. I like the wild card. It’s been good, but if there is a way to improve it, I’m all for it. More playoffs is a good thing.”

Stearns: “There’s a benefit from a competitive balance standpoint to having more teams in the race. That’s clear. It’s potentially going to lead to strong engagement, it can help out in some other areas as well. I certainly understand the purist argument that increasing the number of teams potentially dilutes the regular season. I’m still digesting it. … I’m interested to hear the debate on this. I’m glad we’re thinking about these things. As an industry, we haven’t been great at implementing change.”

Kansas City Royals GM Dayton Moore: “I view it real simple. This is my 27th year in pro baseball. I grew up in the game very traditional. Whatever the commissioner says, we do. Whatever the rules are, we do. I wasn’t for instant replay. I wasn’t for interleague play, but I don’t get caught up with it. If the commish says this is best for baseball, then we’re going to work like heck to make sure it is the best for baseball.”

Hoyer: “I would lean toward maintaining the importance of the regular season. That’s what makes baseball special. It matters. The marathon is really important. The more playoff teams we have, the more we sort of get away from that a little bit. If we go that route, I would hope they would do something to preserve that, whether it’s making a big deal out of the team that finishes with the best record or whatever it might be. The marathon is why we do this. It’s why we look at the standings every day. We don’t look at the standings every day in other sports in the same way.”

What’s the most exciting thing at your spring training camp?

Cleveland Indians GM Chris Antonetti: “Francisco Lindor‘s hair. The blue/silver combination is something you won’t see in any other camp.”

Forst: “We don’t often get to return the majority of our club. I’m excited that we have a group that knows each other, that has played together, and that can actually build on the previous season, and that we didn’t have to do quite as much turnover this offseason.”

Dipoto: “Watching the young players grow. We have so much young talent. If I were to flash back two years, it’s night and day — what’s happening in our organization, the quality of the prospect system, the quality of the young guys that are at the big league level. I think we’re going to wind up as the youngest team in the American League, and what’s exciting to me is watching them get better every single day.”

Woodward: “The belief. Our group has a lot of optimism. There’s a lot of belief in our clubhouse that we’re gonna be good. And they expect to be.”

Stearns: “I’m excited about our depth as a team. We took an approach to this offseason where we believe we created a really talented roster from 1 to 30 that we think can help us throughout the entirety of the season. I think it’s about as deep a team as we’ve had since I have been here, so I’m excited about seeing that depth come together and seeing some of our different puzzle pieces fit together.”

Moore: “We have great energy and a hunger with our players that, truthfully, I haven’t seen over the last couple of years. Mike Matheny is a tremendous man and great leader. We had an interesting offseason. We’ve had an ownership change and a managerial change. The neat thing about our ownership group is they live in K.C. or have strong ties to K.C. That gives us a competitive advantage going forward. They don’t view this as an investment. They view this as a mission.”

Chicago White Sox GM Rick Hahn: “We’re on the precipice of an extended run of success. This rebuild was never aimed at jumping up and winning for just one year. It was aimed at putting us in a position to contend for multiple years. From our standpoint, we view this as just a start.”

Bell: “What’s exciting in camp is the culmination of a lot of different work over the last couple of years putting this foundation together. It’s the excitement of having a player from Japan [Shogo Akiyama] and the media that comes with that. It’s added an element. And veterans like [Mike] Moustakas and Wade Miley and Nick Castellanos.”

Los Angeles Angels manager Joe Maddon: “We have several great athletes, I’m finding out very quickly. There’s more there than I knew. Billy Eppler has done a wonderful job in the draft. We have athletes. It’s very interesting.”

Roberts: “The one thing I’m most excited about in our camp is to watch Mookie Betts every day.”