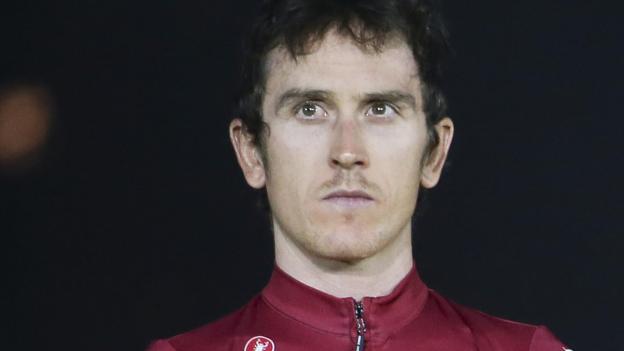 Geraint Thomas says he will need to be in better shape this season to repeat his Tour de France win of 2018.

“I’ll have to be better and every year the standard goes up,” said Thomas.

Thomas says he is hoping to ride in the road race at the Olympics – just six days after the Tour de France ends – as well as the time trial in Tokyo.

The 33-year-old knows achieving a second Tour de France win will be even harder than his victory two years ago.

“Early season races are so much quicker than they were even two years ago,” said Thomas.

“The whole peloton is training better and they are more professional.

“So I just need to keep working hard.”

Returning to competition and becoming a dad

Thomas has returned to competitive racing at the Volta ao Algarve in Portugal this week.

And he says he already feels much better than this time last year – when his extended Tour de France celebrations left him playing catch up for the early part of the season.

“There’s nothing worse than being at a race when you’re not quite fully at your best,” Thomas told BBC Sport Wales.

“Last year was the anomaly really. I’ve basically just got a lot more bike riding under my belt and a lot more training hours [this winter].

“I’m really happy with where I am.”

Another big difference this season is that Thomas is now a father. He and wife Sara welcomed their baby boy into the world last October.

The new arrival was ‘timed really well’ in Thomas’s words, as it meant he could spend the four months of his off-season with his new young family.

“I love it. I’m just besotted with him,” he smiled.

“But nothing changes when it comes to bike racing. I don’t feel any different when I’m training. You’re still in that same frame of mind.”

The Olympics are ‘the pinnacle of sport’

A career that brought Olympic gold medals on the track in 2008 and 2012 may yet being a third on the road this summer.

“A medal in the road race or the time trial would be massive,” Thomas said.

“To win another gold would just be incredible. The Olympics is what I grew up watching. It’s the pinnacle of sport.”

Even the six-day turnaround between the end of the Tour de France and the Tokyo Olympic road race is not putting Thomas off – perhaps because he knows he will not get opportunities like this for many more years.

“I’m not going to be with a chance of winning the biggest races year in, year out. It’s going to come to an end at some point.

“But I’m certainly not slowing down at the moment. I’ve still got other races in the back of my mind that I want to go to and perform well in. The Giro, the Classics. There’s still a lot I want to do.

“Winning the Tour de France in 2018 settles you down. I’m not desperate now. It just takes that internal pressure away.”

Bengals TE Hurst (calf) will play in AFC title game
Haas: Pietro Fittipaldi to be reserve driver for fifth consecutive season
The USWNT needs Julie Ertz but she won’t be at the World Cup. What now?
Mikheyev to have surgery; played with torn ACL
NHL Power Rankings: Projecting playoff chances for all 32 teams